Don't use plagiarized sources. Get your custom essay on
“ An Analysis of Richard Wright’s “The Man Who Was Almost a Man” ”
Get custom paper
NEW! smart matching with writer

Dave’s goals in the story are very clear from the beginning; he wants to get a gun, assuming that the other men “would have to respect him” if he had one. However, the cruel and comedic irony of the story is that, at the end, he is in trouble with his parents and everyone is laughing at him, despite him owning this gun that he was sure was going to be good for his image and give him respect.

Dave actions, are, too, ironic. Despite thinking he is now a man because he owns a gun (or is about to own a gun), he doesn’t act like one.

In fact, it is arguable that Dave behaves more and more like a child as he progresses in his quest of manhood. Firstly, after inquiring about purchasing the gun, he goes home and asks his mother for the money. Masculinity, especially in Wright’s lifetime, included being financially independent and the financial leader of the household. Not only is Dave not able to use his own money, as it is being controlled by his parents, but he must ask his mother, a woman, for the resource. Even what he says doesn’t help with his childish image. He states, “Ma, ef yuh lemme buy one Ah’ll never ast yuh fer nothing no mo,” which is very commonly heard in desperate children. His mother exclaims the obvious, “Yuh ain nothing but a boy yit!” Dave seems to ignore this statement. He doesn’t verbally agree with his mother, but he doesn’t try to contradict her, either.

Perhaps Dave’s most childish action is trying to hide from his responsibilities, when a signal of one’s maturity and adulthood is accepting responsibility for your actions. Dave, without proper knowledge of how to use a gun, starts shooting it off and accidentally shoots the mule he’s working with, Jenny. Although he tries to fix the wound, she dies. Instead of explaining to his boss, Hawkins, what happened, Dave buries the gun and tries to lie about it. However, an older man explains it looks like a bullet hole, exposing Dave. Wright then writes, “Dave looked at Jenny’s stiff legs and began to cry,” another seemingly unmasculine action.

Dave further refuses responsibility by not paying back Hawkins for the mule. Instead, he takes the gun, runs away from home, and hops on a train. Now, the ending of this story may be interpreted differently depending on the reader. Many adults can recall trying to run away from home as children; it is just one of those things children tend to do. Therefore, they can interpret running away as another one of Dave’s childish antics. However, a younger reader may see the romantized writing of the ending and see Dave’s running away as a heroic and masculine deed, a push for independence. However, if one looks back at the text and applies logic, Dave’s plan wasn’t well thought out; Dave doesn’t mention knowing anybody in the place he is planning to go, so he has no human connections. He also doesn’t have any money or food. All he is carrying is his precious, but ultimately useless, gun, since he emptied the cartridge before hopping the train. Even if Dave ended up making money wherever he went, Dave never spent any of his own money; his mother took care of it knowing he wouldn’t invest it, such as buying new clothes for school. All in all, Dave doesn’t seem to have what it takes to go out on his own yet; he is still a child.

There is an overriding sense of dramatic irony in this piece that categorizes it as a satire, and the story can used and interpreted by different audiences as a whole because of this reason. Dave has a one track mind that keeps getting him into trouble; he thinks that just because he has a gun and a potential to be violent, he is automatically a man. An audience that better understands the multi-faceted and complex idea that is masculinity can sit back and laugh at this foolish character. However, an audience that has a similar mindset to Dave can see his foolish actions and ambiguous-but-most-likely-unhappy ending and feel foolish within themselves. Here, they may be encouraged to change their mindset, seeing Dave’s story as a prophetic, cautionary tale. Wright’s purpose of the story was to not only entertain those who know more about life than Dave, but also inspire a younger generation to think about their manhood in terms greater than a handful of metal.

An Analysis of Richard Wright’s “The Man Who Was Almost a Man”. (2019, Aug 19). Retrieved from https://studymoose.com/an-analysis-of-richard-wrights-the-man-who-was-almost-a-man-essay 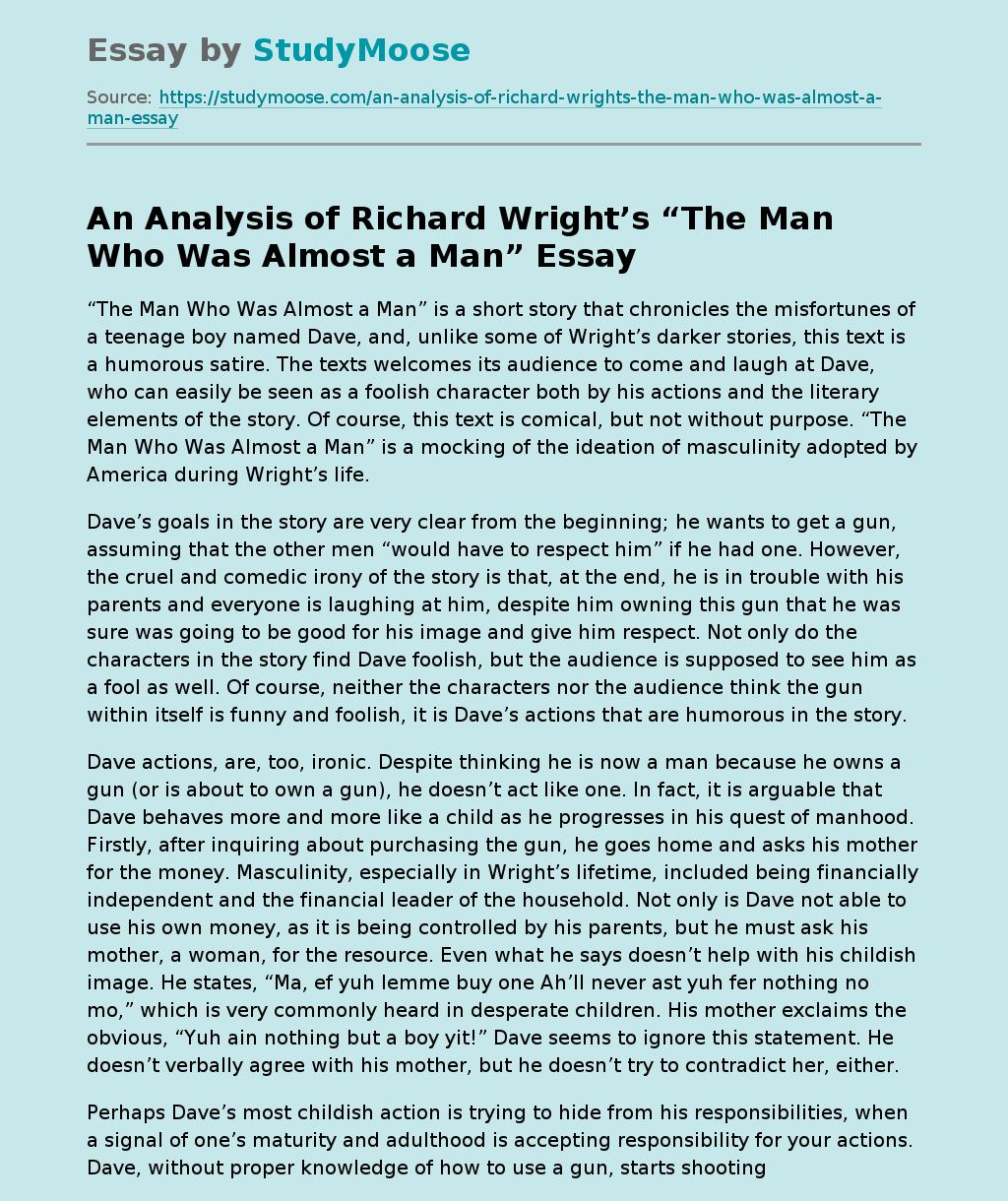