In Revolutionary Mothers, Carol Berkin (2005) argues strongly that the Revolutionary War is a story of active participation of both women and men. Both the women and men in the society played a huge role in ensuring that they attain their liberty and freedom. Most of the people sacrificed their well being to see that the freedom of the society is achieved. Women played an active and vital role in the war; although it is common conception through history books which left reader with the suggestion of only involvement of men in the war, and greatly minimized or completely left out the contributions of women in the creation of our nation.

Don't use plagiarized sources. Get your custom essay on
“ American Revolution in Revolutionary mothers ”
Get custom paper
NEW! smart matching with writer

She told the realistic tales and did not romanticize the roles of women in revolutionary war.

Berkin depicted the hierarchical social class system existed in 1700s where women did not enjoy the rights. Most women were bound to domestic servitude. Legally, women had almost no rights and were at the mercy of their father or relatives if single, and their husband if married. Women were seen as helpmates to their husbands in order to make the family be successful. However, by the mid-1700s, wealthy women were no longer having to complete all household tasks themselves; they just had to supervise servants as they completed the tasks.

This allowed them to take on the role of a “pretty gentlewoman” (Berkin 2005, 8), which required women to be charming companions to their husbands and to devote themselves to pleasing their men. Camp followers were lower-class women who cooked or did the laundry for the soldiers of both armies and others served as nurses for injured soldiers.

Since the revolution began with protests against taxation and the act of enslave, women and girls demonstrated along with their husbands, fathers, brothers and sons against British policies (Berkin 2005, 27). The women not only participated in the war, but also ensured that the men are very equipped for war through the various services that they provided. Women changed themselves and prepared them for the war while traveling with army, and serving in different capacities such as cooks, laundresses and nurses (Berkin 2005, 43), spies, couriers , farmers, shopkeeper, school teachers and farmers in difficult circumstances of war (Berkin 2005, 34-35).

The women participated in agriculture that ensured that the soldiers remained healthy and that the society itself ate very healthily. The women during the time of war were also sent to spy on the enemies In spite of facing inflation, shortages of essential supplies, widowhood and the realities of death and destruction that came during revolutionary war, women played a brave role in politics and vital role in economics. Women were subject to being killed or raped due to the political views they and their families held. Devastation by the Armies, confiscation of crops and livestock, the destruction of homes and property made no room for women but in despair (Berkin 2005, 35).

As the war lasted for almost a decade, wives faced the loss of spouses and children in the war, and many faced financial hardship. Berkin cited many references of 1700 or 1800 including letters of correspondence, memoirs, and personal diaries of individuals from the Revolutionary War period to authenticate his thesis. She showed the war through the eyes of patriot and loyalist, rich and poor, American and British, Indian and African American women (Berkin 2005, 121). This collectively showcase the joint efforts realized by women and not merely a war of black and white, good versus evil. women were seen as being very patriotic and as building up the morale of the soldiers.

Some of the people were persuaded to join the British front by Sir William Johnson and they forewent their ethical stand and joined the army in cloning the people. As a result of the alliance with the British, the American soldiers burnt and completely destroyed the native society towns, living many inhabitants displaced. The Cherokee women are the ones who had sacrificed most during this colonial times in order to attain their liberty and freedom (Berkin 2005, 108) including the example of Molly Brant, Nanyehi or Nancy Ward, who was named as “Beloved Women” a title honored to women warriors. (Berkin 2005, 115). They had been fighting the British even before the American revolution . The British disrupted their way of life and due to this they saw the need to fight back the colonialists to redeem themselves.

After their success, most of the Cherokee women were relocated to the present klahoma. Some resisted the relocation by the new government. Many of this women of this kind of society were widows as their husband got killed in war. Author focuses the legacy of the American Revolution. Women showed bravery, and adept at handling harsh and undesirable circumstances. But right after war, things went back to the way they were before the war. It would be over sixty-five years before women would begin their fight for equal rights and the right to vote at Seneca Falls in 1848.

In conclusion, I would enthusiastically recommend the book, Revolutionary Mothers by Carol Berkin. It is a well-written and strongly-referenced book that tells the story of women in the American Revolution. It helped me contribute my background knowledge of the Boston area due to the importance of Boston in the Revolutionary War. It shows that women played a major role in the founding of our nation. Through this book, Carol Berkin allows us an opportunity to realize the extraordinary work carried out by ordinary women, and their great contribution in horrific and difficult time of our country’s history. 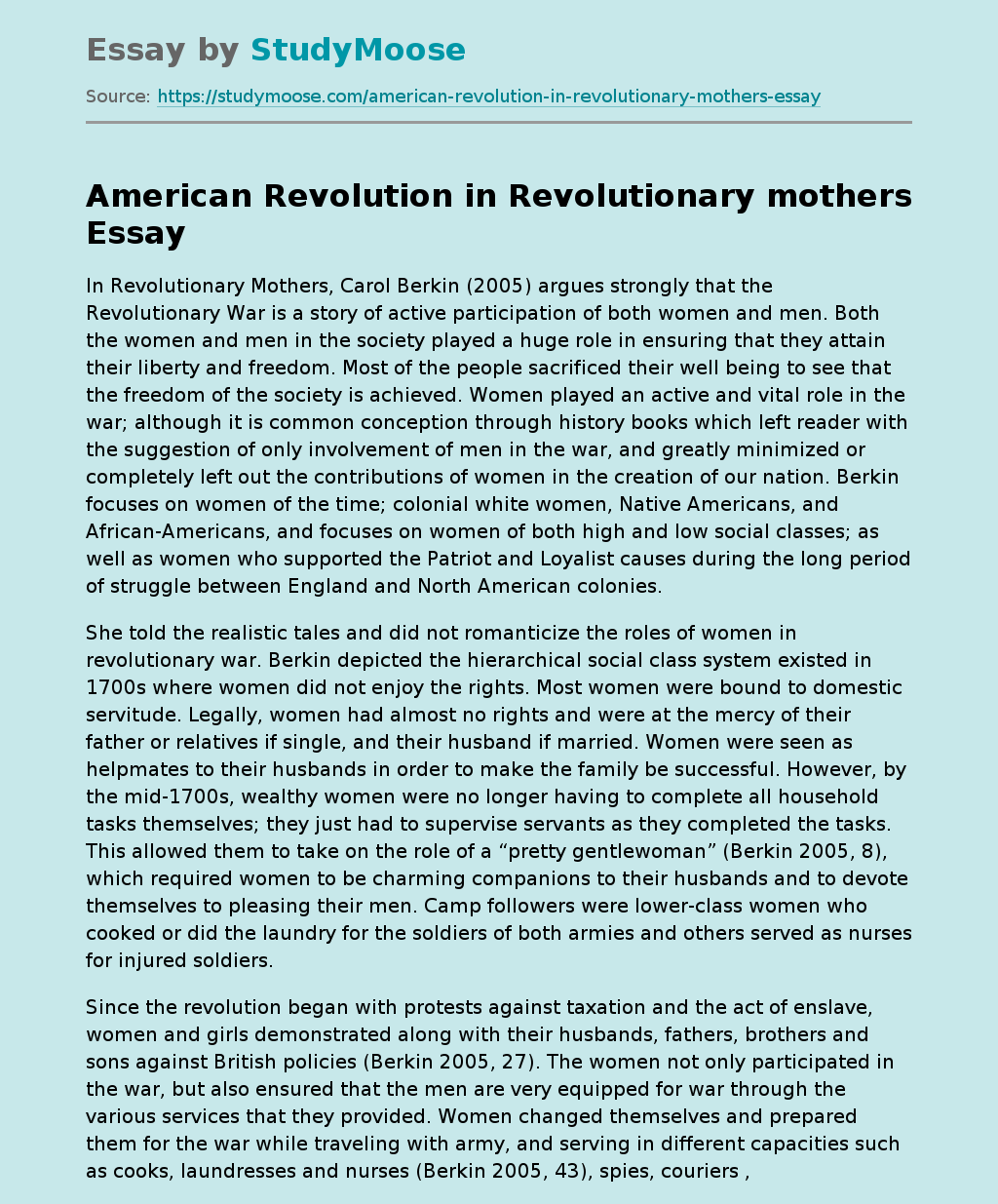