In the past twenty years the United States school system has been accumulating a bit of criticism. Studies have shown that the United States has been lagging exponentially compared to almost all the industrialized countries. This specifically refers to Asian countries that are statistically blowing the U.S. out of the water. In his article “New Math-Science Study Rates U.S. Students Mediorce At Best” William S. Robinson decusses survey results after students from around the world have taken a science and math test.

Don't use plagiarized sources. Get your custom essay on
“ American Education vs Asian Education ”
Get custom paper
NEW! smart matching with writer

The survey results in the universal subject of math show us that the U.S. eighth graders have fallen behind, while the twelfth grade level showed only slight improvement.We would potentially look at these education systems as extremes of each other. Each education system being on the different side of the spectrum. Both systems having faults and advantages. Taking the positive aspects from both sides and merging them together, a harmonious education system could be established .

In the article “ Strengths, Weaknesses, and Lessons of Japanese Education” James Fallows tells us that in an Asian classroom students will feel an incredible amount of pressure starting from grade school and up, while U.S. teachers are too afraid to raise the bar because of potential discouragement of the student(201). In Japan, University admissions as opposed to grades earned in university, determines what kind of career you can have in Japan. Japanese students will spend most of their time studying in cram schools, unlike American students who spend most of their time socializing.

A negative of the Asian school system, is the conformity that must be upheld. This achieves better education because it becomes the “thing to do”.

When everybody is on the same curriculum there is no other choice but to follow the herd. While conformity creates better math students, it demises the aspect of creativity and individuality. The U.S. places a much bigger emphasis on creativity and choice. Thus providing students with opportunities that help them learn about them selves, and develop original ideas. An important characteristic that the U.S. education system lacks, is the idea of effort being directly correlated to success. In her article “ Why Are U.S. Kids Poor In Math” Barbara Vobejda says that the American and Asian mothers have a diffrent view on what determines their child’s success in school.

Though the American student may think that they work hard, we find that the Asian student is at a much greater level of pressure. As we saw in the previous passage, serious pressure is put on the Asian student. In further examination of the article “Japan’s School System”, a supporter of the catalytic pressure theme, we find many contrasts to the U.S. views of putting pressure on students . Japanese students attend school six days a week. The school year consists of 220 days compared to the 180 days in the U.S. A third grade Japanese school week consists of eight hours of Japanese, five of arithmetic, three of science, social studies and physical education, two hours of music and art. For an U.S. student this might seem like hell.

Yet the only reason this might seem like to much pressure, is because we are judging their system with an ethnocentric point of view. Japanese students think it’s quite OK. Humans are a very dynamic and adept species. We always look at things from our conditioned point of view. Thus, if pressure is increased on the U.S. students, the only ones who would have any complaints are current students. Being dynamic and adept, they too would be able to fulfill the new requirements asked of them. The eastern ideas of pressure could be used as a catalyst for results in the U.S.

While as much as we are in need of more pressure on the students, we must retain the creative individual factor at all costs. We are not machines that have identical downloaded brains. In the article “We Should Cherish our Children’s Freedom To Think”, Kie Ho provides a critical question. He asks, “If American education is so tragically inferior, why is it that this is still the country of innovation?” Looking back at the regular Japanese school week, we find that not much attention is brought to music or art. Creativity forms individuality, expression of ideas, and self-fulfillment. This could ruin all the conformity and control of ideas in the Asian student.

Our Asian friends could never have that happen now could they. Ho provides an example of an U.S. student taking a role of Lyndon Johnson and debating a student in the role of Ho Chi Minh. An Asian student would never be given a chance to look at things from a different point of view. In all their mathematical glory they have missed the essential human need to express individuality. Most likely that is done with intent. While many Americans yell and scream about their children’s math abilities, they have overlooked the fact why most immigrants come here. This fact is freedom. Which would not be possible without all the creative outlets provided by our school system.

In merging these two fundamental ideas of both of the education systems, many new positive effects are felt by the students. An increase of pressure to motivate and accelerate education. The development of ideas and creative outlets, which lead to self-discovery and formation of original and innovative ideas which, fuel our nation. This guarantees freedom and a mind to use it. Americans complain about the core subject of education. That will change with a harder curriculum and more emphasis being placed on effort. We will also continue providing our students with individuality. Asian education can also see positive effects from the development of choice and move away from conformity. The students who do cannot or will not participate in the hard curriculum will now have a choice to develop their creative side. These changes will be hard to make. U.S. students adjusting to a faster harder education. Asians might start to loose control of the masses. In the end it will be beneficial for both. 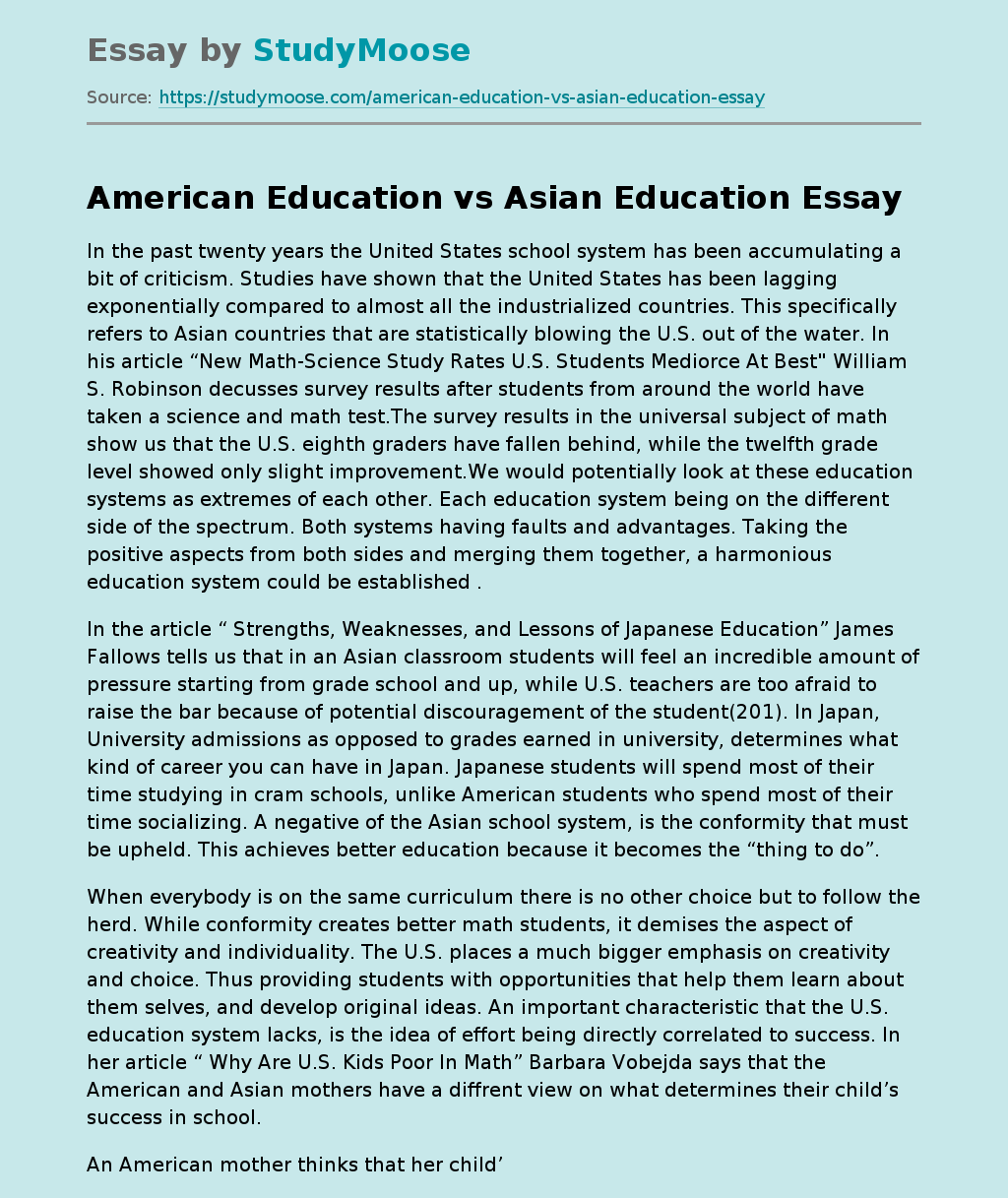