Alma Electronics: I'll Dream of You

Mr. Andy Mallari’s goal is to develop his small electronic shop into that kind of business of Mr. Estrelito Chan, which has already grown into a well-established appliance assembly plant in Manila. He, Mr. Mallari, however has three sons who belong to the top ten in their respective classes and he thinks that his children have great potential of helping him realize his dream of establishing his own assembly plant. Mr. Mallari should take into account every single detail in his plans from the biggest up to the smallest ones for if there is any case of missteps in his endeavor, it can ruin all of his plans.

Don't use plagiarized sources.
Get Your Custom Essay on Alma Electronics: I’ll Dream of You Just from $13,9/Page

His business started as a mere electronic supply and repair center in Burgos Ave., Cabanatuan City and he has employees consisting of technicians who came from different towns of Nueva Ecija. His business has grown up until he managed to build a new bigger shop at Del Pilar St. Considering this fact, we can safely say that his working force in terms of manpower is effective since he was able to bring his business into having different sub-branches in the various big towns of Nueva Ecija such as San Jose City, Gapan City and Guimba.

This all say that he has established a firm business, but he has decided to take a step further in his endeavors by setting his goal of establishing a larger scale enterprises.

In view of this, different challenges will sure emerge like he already has to set a new outline for his business’ working force and he will be needing more experienced employees with deeper knowledge about electronics industry. He has his three sons as potential pillars for the realization of his dreams. That’s why the most critical part of his plan is the choice of course he will recommend his sons to take, and whether or not his sons will take into account the course he will endorse.

According to Engr. Helito R. Singson JR., if he were Mr. Andy Mallari he would choose Electronics and Communications Engineering to be the course for his first son, since electronic industry is what his business is all about. He added that it is wise that his son who, if ever, will be an electronic engineer be positioned as a supervisor. The second son is to take business administration; he will be in charge of the management aspects within the business. And the third one is to take finance, and he will be in charge of the financial aspects of the business.

Alma Electronics: I’ll Dream of You. (2016, Aug 19). Retrieved from https://studymoose.com/alma-electronics-ill-dream-of-you-essay 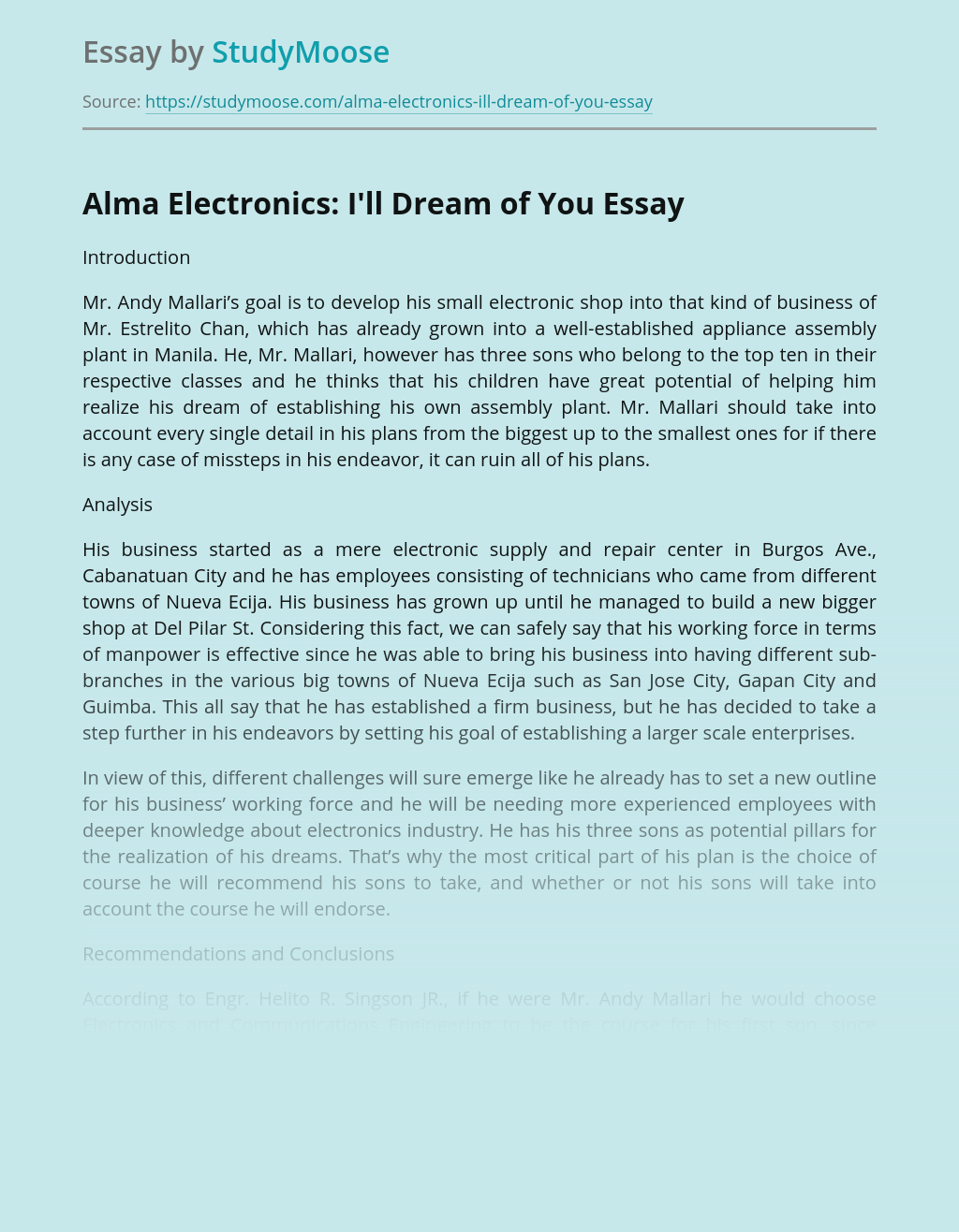 Introduction: Five Forces Framework in Personal Computer Industry Porter’s Five Forces Model is a model that analyzes an industry to help develop a business strategy. The model uses five forces that have been identified to categorize an industry as intensely competitive or not competitive at all and this will then determine the attractiveness of the...

View sample
A Case of Digital Divide in Bangladesh

ICTs can reduce communication costs and break down geographical borders. In the developed nations government policies are being established which attempt to ensure that all citizens will get the opportunity to access the effective use of ICTs in order to enable them to participate in the educational, social and economic activities and democratic processes. Developed...

Question 1 Bargaining Power of Suppliers Although there were many suppliers for computer components, “microprocessors were supplied by only a handful of companies.” Pg.3. Microsoft and Intel monopolized the suppliers market as, “between 85% and 90% of computers sold conformed to Microsoft/ Intel Standards.”pg.3. With such a high percentage of computers being sold using Microsoft...

CHAPTER I THE PROBLEM Introduction It is known that we are living in technological era. The computers become irreplaceable tool in everyday life of almost each person. The adult users generally use it for business purposes while youngsters for computer games. Computers became the part of our life and very important component in the spheres...