All Souls: A Family Story From Southie

A national bestseller, All Souls: A Family Story From Southie (Beacon Press, September 1999), won an American Book Award and a New England Literary Lights Award, as well as the Myers Outstanding Book Award administered by the Myers Center for the Study of Bigotry and Human Rights in North America.

With All Souls MacDonald writes a gripping memoir about his life growing up in the Old Colony housing projects in South Boston, a predominantly white Irish Catholic neighborhood. He writes about the crime, drugs and violence in his neighborhood in the years following Boston’s busing riots, and of his brothers and sisters, many of whom fell prey to drugs, crime, and suicide.

Don't use plagiarized sources. Get your custom essay on
“ All Souls: A Family Story From Southie ”
Get custom paper
NEW! smart matching with writer

The book introduces his mother, Helen King (Ma), a feisty woman who raised her ten children while living in the projects. (An eleventh child died in infancy.) Additionally, the book often mentions Whitey Bulger, a gangster and FBI informant in Southie, who brought the drug trade into the neighborhood, contributing to the deaths of hundreds of young people due to suicides, murders, and overdoses.

Despite all that is bad, MacDonald writes about how proud and loyal the residents were to be from Southie, excluding MacDonald himself who admits in the book he told those he met that he was from Dorchester and how some of the best elements of the neighborhood have been wiped out along with the worst due to gentrification.

Michael Patrick MacDonald (born March 9, 1966) is an Irish-American[1] activist against crime and violence and author of his memoir, All Souls: A Family Story From Southie.

Since being involved in activism, he helped to start Boston’s gun-buyback program, founded the South Boston Vigil Group, which works with survivor families and young people in Boston’s anti-violence movement. MacDonald was the recipient of the 1999 Daily Points of Light Award,which honors those who connect Americans through community service. Michael had been awarded an Anne Cox Chambers Fellowship at the MacDowell Colony, a Bellagio Center Fellowship through the Rockefeller Foundation, and residencies at Blue Mountain Center and Djerassi Artist Residency Program.

He currently lives in Brooklyn, New York, and devotes all of his time to writing and public speaking on topics ranging from “Race and Class in America” to “Trauma, Healing, and Social Change.” MacDonald is Writer in Residence at Northeastern University in Boston.

All Souls: A Family Story From Southie. (2016, Mar 09). Retrieved from https://studymoose.com/all-souls-a-family-story-from-southie-essay 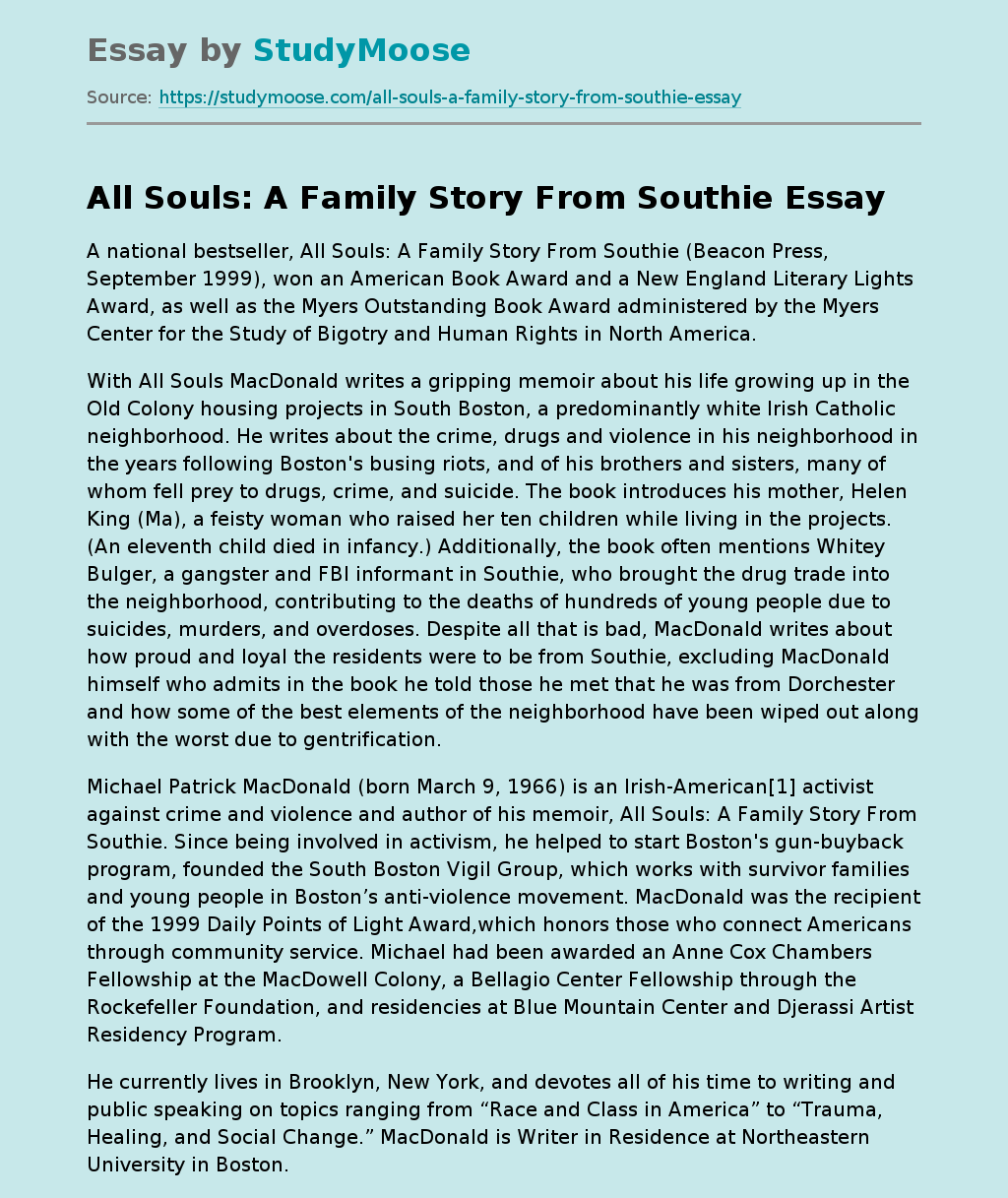