Individual Moral Integrity In The Crucible

Individual moral integrity and the lack thereof are illustrated by Arthur Miller in his play, The Crucible. The fear of witchcraft engulfs the Puritanical society thus creating a mob rule. The fate of the town depends upon the morals of its people. John Proctor and Reverend Hale are key players in condemning the Witch Trials; ruling the mob are Abigail, Judge Danforth, and their followers. Even though the trials were intended to end when Salem was cleansed of the alleged witchcraft, it remained the responsibility of the individual to ensure that the majority did not become completely overthrown by mass hysteria.

Don't use plagiarized sources.
Get Your Custom Essay on Individual Moral Integrity In The Crucible Just from $13,9/Page

The lack of moral integrity displayed by characters in the play causes a string of destructive events. Because of Reverend Paris’s sole concern of social acceptance and political power, the acts of Abigail and her followers go unpunished. This sends the town of Salem into a whirlwind of lies. A domino effect takes its toll as accusations multiply. Abigail, in the driver’s seat of the conspiracy, is granted a loyal following.

This group lacks a respect for themselves and a respect for others. The townspeople and especially the girls caught dancing feed the mass conformity. As a result of blind conformity and weak morals, many friends and neighbors are cynically disowned and mercilessly executed.

Judge Danforth, who is sentencing death upon many innocent victims, further illustrates a lack of individual moral integrity. He does not have the power to admit the mistakes he has made and admit the irrationality of the trials. “You will sign your name or it is no confession,” Danforth forcefully explains to John Proctor (142). Danforth will not budge even after Proctor has verbally admitted to “seeing the devil”. By this climactic point of the play, Reverend Hale has ended the alliance between himself and Danforth. He has now grasped the true motives behind the witch conspiracy.

Hale, when he first enters the witch trials, believes all of it to be legitimate. He expresses a strong will in the hunt and a strong view of his morals. He is partially responsible for getting the entire cleansing proceedings under way. As the events of the town continue to pass, and the numbers of the accused continue to rise , Hale begins to reassess his opinion towards the trials. He objects to Judge Danforth, “We cannot blink it any more. There is a prodigious fear of this court in the country” (98). Hale slowly begins his transformation from advocator to adversary. “Let you not mistake your duty as I mistook my own,” Hale says as he pleas with Goody Proctor in an effort to spare John Proctor’s life (132). It becomes clear to Hale the absurdity of the trials, and he is one of the first people to openly condemn the injustice. As a figure of authority, his opinion has a large impact on the public. In addition to Hale’s influence, John Proctor lets his moral integrity lead him in his reactions to the trials.

Proctor is right in the heart of the tragedy. Because he is haunted by previous actions, a severe turn in the trials is needed to get him involved. After his wife is arrested for witchcraft, Proctor understands that he can no longer hide away on his farm. “Now Hell and Heaven grapple on our backs, and all our pretense is ripped away,” Proctor says to Mary Warren, while trying to convince her that they must go to the courts (80). He realizes the seriousness of the situation, and forfeits his own well being towards that of his wife. Still, it is ironic that Proctor has always viewed himself as one with low moral integrity.

“My honesty is broke, Elizabeth; I am no good man,” says Proctor in his final conversation with his wife (136). However, the actions he takes in the finale are that of reverent nobility and moral integrity. His morals lead him to catch a glimpse of the big picture; he will not let the Salem witch trials conquer him as they did so many others. His decision to die an honest man frees him of the torment felt in his soul of being unfaithful to his wife and he can at last be at peace with himself. He lets it be known to the public, through his actions, that he has not had relations with the Devil, and that the witch hunt is completely in vain.

In the play, The Crucible, individual moral integrity aids in the fortunate collapse of the insane Salem witch trials. John Proctor and Reverend Hale take a stand against the authority figures and let their morals shine through to the public eye. By proclaiming and bringing notice of the wrongs of society to the public, Proctor and Hale allow the mob rule to be stopped. Without the rebellious attitude of a certain few, more innocent victims would have been denied such fundamental rights as life, liberty, and the pursuit of happiness.

Individual Moral Integrity In The Crucible. (2016, Jul 13). Retrieved from https://studymoose.com/individual-moral-integrity-in-the-crucible-essay 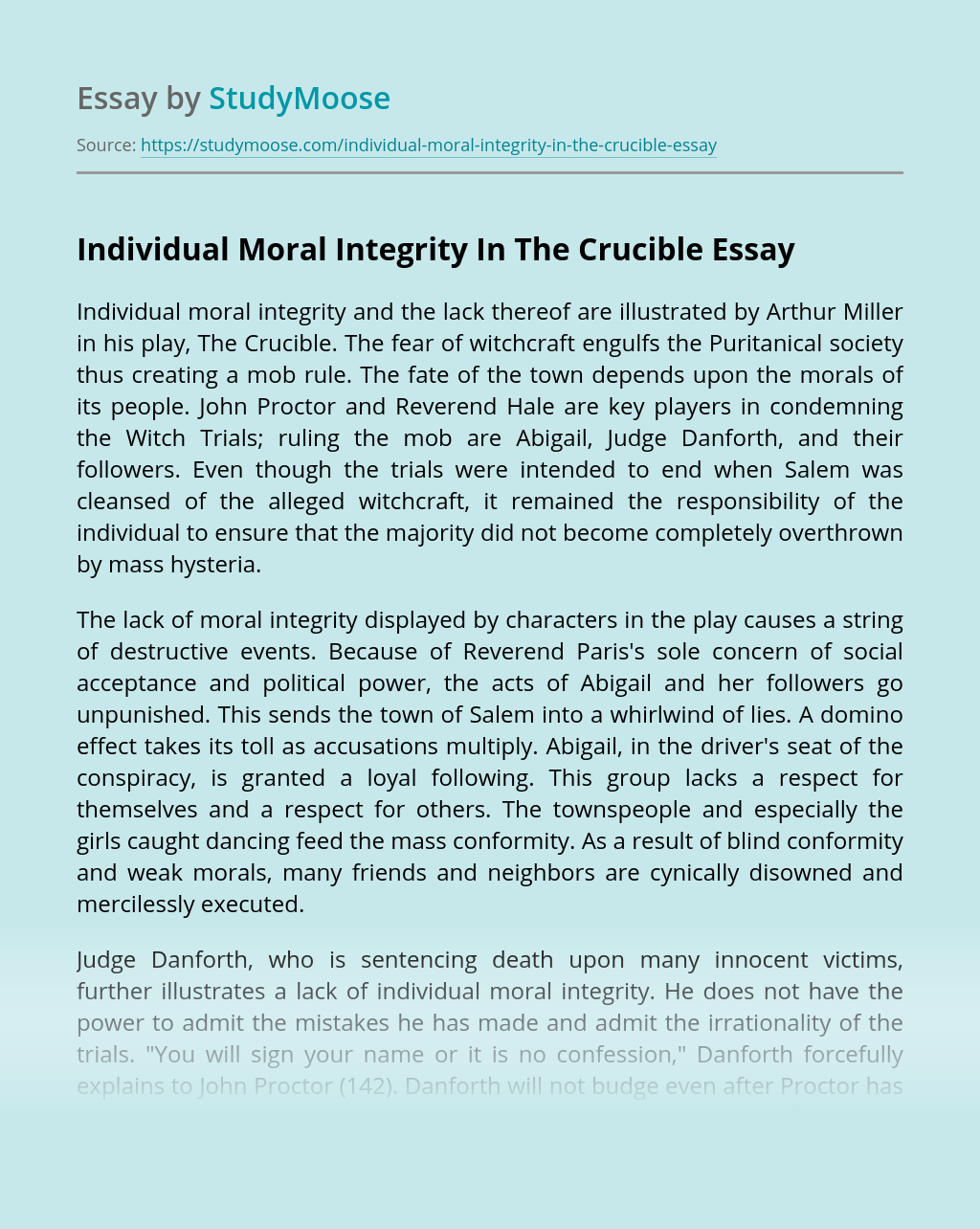 As nurses we often find ourselves trapped in the center of ethical dilemmas between physicians, patients, family members, co-workers, and employers. In ethical dilemma our ethical values and ethical behavior guide us to provide the best care to our patients. In this paper I will define ethics value, my ethical values, and how did I...

Professionalism in the Army

Professionals in the United States Army stand apart from others engaged in particular careers in the civilian world. While many vocations contain some of the characteristics of professional, a lot of careers do not include all of the elements necessary to distinguish themselves as being as close to a professional as a United States soldier....

Socrates was one of those rare individuals who “practiced what he preached. ” His allegiance to being just and good wasn’t merely lip-service, and it was proven in his behavior. It’s easy to say you believe certain things, but another thing entirely to prove this belief with your actions. Socrates was perhaps the finest example...

The fabric of any society is held together by the standards of morality that we maintain and practice. Values are our personal set of beliefs about what is important, unimportant, right, wrong, good and bad. When we are confronted by choices, options, or moral dilemmas, the decisions we make will indicate what values we hold....