The twentieth century was rich in events and outstanding personalities. In his book Age of Extremes, Eric Hobsbawm provides an extensive review of what happened during the Twentieth Century and the impact of those events on human development. According to Hobsbawm, the Twentieth Century was both the Age of Catastrophe and the time of the extraordinary economic growth – a complex sandwich of events and developments that changed the human society “more profoundly than any other period of comparable brevity” (Hobsbawm, 1995).

In the first two chapters of Age of Extremes, Eric Hobsbawm (1995) tries to evaluate the social and historic legacy of the Twentieth Century and creates a brief picture of the events and accomplishments that took place between 1914 and 1991.

Don't use plagiarized sources. Get your custom essay on
“ Age of Extremes ”
Get custom paper
NEW! smart matching with writer

The author is confident that human society cannot distance itself from the events of the past, because everyone on the globe, irrespective of their life history and personal background, went through more or less similar central experiences that affected them all (Hobsbawm, 1995).

Hobsbawm (1995) traces the evolution of the Twentieth Century from the First World War, which marked “the breakdown of the western civilization of the nineteenth century” (p.

6). The western civilization was characterized by capitalist economy, liberal constitutional structure, bourgeois image of the hegemonic class, and the glory of scientific, educational, technological, knowledge, and moral advance (Hobsbawm, 1995).

The decades following the beginning of the First World War were the Age of Catastrophe: until the end of WWII, the society stumbled from one calamity to another and lived at the edge of survival (Hobsbawm, 1995).

The failure of the major colonial empires and the economic crisis of unprecedented depth added their share of complexity to the state of world affairs (Hobsbawm, 1995). Hobsbawm (1995) believes that the victory of the Soviet Union over Hitler was one of the most important events of the Twentieth Century.

Without it, the whole Western world could have turned into set of variations on fascist themes (Hobsbawm, 1995). The rise of the socialist movements was the direct result of the weaknesses in the nineteenth-century bourgeois society (Hobsbawm, 1995). How and why the world threw itself into the Golden Age of capitalism between 1947 and 1973 remains one of basic historical puzzles; but the Golden Age could not be endless and the global crisis that followed affected all, irrespective of their political, social, and economic configurations (Hobsbawm, 1995).

The economic crisis gradually extended to cover political issues – the collapse of the Soviet Union produced an enormous zone of political uncertainty and destroyed the stable system of international relations (Hobsbawm, 1995). The economic and political uncertainties were followed by the moral and social crisis – the crisis of beliefs, which humans had used over the course of the Twentieth Century to win their battle over the nineteenth century’s ideology (Hobsbawm, 1995).

The century that had begun with unbelievable optimism and faith in the future ended with a bang and a whimper, leaving the society in the midst of the moral, social, economic, and mental collapse (Hobsbawm, 1995). In Hobsbawm’s (1995) view, the Twentieth Century was the time of unprecedented achievements and dramatic failures. The cyclical nature of evolution resulted in continuous instability and profound economic, social, and political shifts.

For many countries, the Twentieth Century became the time of remarkable changes and the beginning of the new era of uncertainty and chaos. Whether countries succeed in resolving the existing controversies depends on how well they can learn the lessons of the past and use wisely the historical, political, and moral legacy of the stormy Twentieth Century. Conclusion The Twentieth Century was the time of unprecedented achievements and failures. The capitalization of the word combination “Twentieth Century” by Hobsbawm (1995) is not accidental.

The author feels that the Twentieth Century reflected a unique paradox: the triumph of the material values and their absolute rejection at the end of the era. The century that had begun with unbelievable optimism and faith in the future ended with the deep crisis of the moral and mental ideologies, leaving humanity in the midst of the social, economic, cultural, and moral collapse. Whether countries succeed in resolving the existing controversies depends on how well people can learn from the past and use wisely the historical, political, and moral legacy of the stormy Twentieth Century. 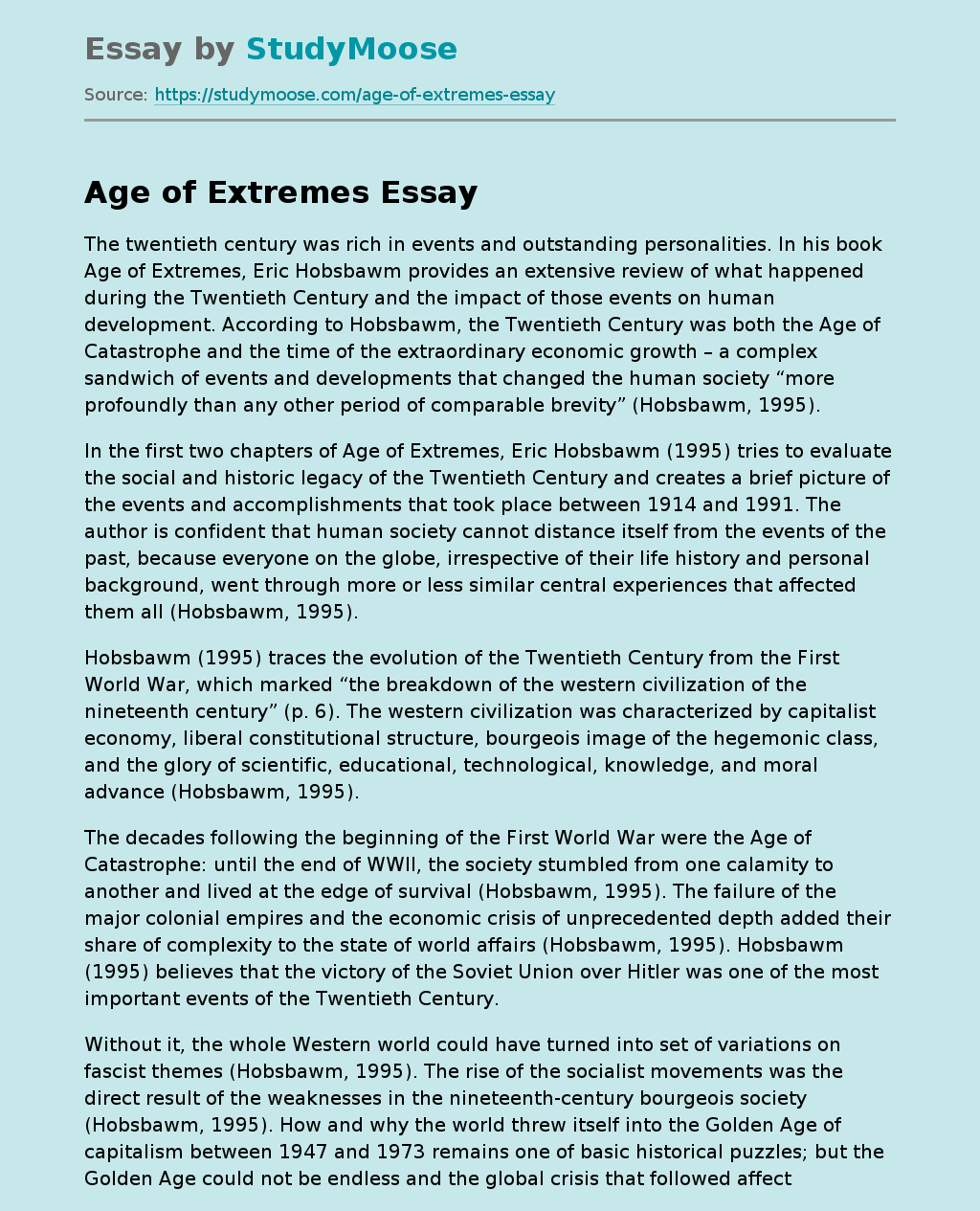