Adversity in the Novel "Life of Pi"

Adversity is the misfortunes a person may go through when they are dealing with conflicts. In the novel, Life of Pi adversity is the challenge that prevents the protagonist from reaching his destiny. When people are confronted with adversity it has a great event on how they can handle what will come next. For example, some people can adapt to adversity while others will give up so easily if things don’t go their way. The novel is about a young boy named Piscine Patel who struggles to survive when the ship he was traveling on sank in the Pacific Ocean.

Don't use plagiarized sources. Get your custom essay on
“ Adversity in the Novel “Life of Pi” ”
Get custom paper
NEW! smart matching with writer

Pi has to learn quickly how to cope with his misfortune and the tragic loss of his family. The novel will show how Piscine adversities will transform his individual identity and determine is inner strength and self-worth as well a shape his personal values. Pi faces many adversities from a boy who lived a sheltered life to a man that was hardened by physical and psychological hardships that he had to overcome in his life.

PI’s biggest conflicts are man verse nature and man versus the inner self.

Throughout the story we see Pi’s struggle of man versus nature through his experiences. When the ship sank Pi struggled to survive from the extreme natural conditions of the sea. For example, Pi points out that he “was alone and orphaned, in the middle of the Pacific, hanging onto an oar, an adult tiger in front of him, sharks beneath me, a storm raging about me,” ( Martel, 118).

We can see the man versus nature adversities that he had to deal with. Pi had to struggle to be alone in the Pacific Ocean and sharing a lifeboat with Richard Parker. He also had to deal with sharks and other elements in the ocean including weather and waves. In order for him to survive with Richard Parker he came up with a plan to tame the tiger. His fear of the beast made it possible for him to fight to tame him. Pi remembers a survival tactic that his father taught him but he did point out that he “ was so obviously outmatched by Richard Parker that it wasn’t even worth worry about”, ( Martel, 149).

Pi knew the tiger sat above him in the food chain and he would have to use every tactic his father the zookeeper used to let the tigers know where it stands in the food chain by establishing a social rank. The social rank help dictate whom the tiger” can associate with and how; where and when it can eat; where it can rest; where it drank; and so on,” ( Martel, 153). Pi’s willingness to survive the tiger shows the traits human beings have such as willpower and cleverness. Pi also struggled with the cold of the night, storms, waves, and adverse weather. He suffered from extreme dehydration and hunger. Pi found a survival kit onboard the lifeboat that gave him a glimpse of hope when needed. He had found a way to collect freshwater with solar stills and land a fish for food. He did struggle in the beginning with both but he overcame the external adversities that pushed him to live. He points out “ the lifeboat did not sink. Richard Parker kept out of sight. The shark’ s prowled bat did not lunge. The waves splashed me but did not pull me off “,( Martel, 167).

Pi struggles with internal adversities that display a conflict with man and his inner self. He finds demons within himself and to change character he uses Richard Parker as a fictional person. In his 227 days of isolation mentally he fights with doubts that he will not survive. After losing his whole family he just believes he should fight to stay alive. So in doing this, he uses Richard Parker as a fictional character to do things that he can’t do. For example, when Pi killed the french chef as a strategy to survive he forces himself to believe Richard Parker killed the chef not him. In doing so he loses faith in god. He feels hopeless and has doubts about his survival. Pi battles internally with the question of why God could have let this happen. Every day he faces near-death experiences and wonders why he should keep going. He internally struggles with the will to live and in order to survive he had to make sacrifices that have gone against his beliefs. For example, to survive he had to abandon his vegetarian lifestyle and kill fish. While he killed the fish he knew he had to keep Richard Parker feed in order to save himself. Pi then viewed himself as a “ killer…now…guilty…[ with] a terrible burden to carry,” (Martel, 183). As Pi fights his internal conflicts, he does find desire, courage, and the will to continue his journey.

In the novel, we can see Pi’s experiences play a major role in shaping him into the man he becomes. Through his struggles to survive, he had to commit both heroic and terrible acts of violence. When Pi killed the french cook it was a gruesome act but a strategy to survive because he knew the chef would have done the same to him. He blames the tiger for the chef’s death because it was a survival instinct. At that moment he was not a boy but a boy becoming a man. With this maturity comes responsibility and he was willing to change who he was and abandoned some of his values to get want he needed. His willingness to change played an important role in his later life by enabling him to be more sensitive to his environment. On the lifeboat, he and Richard Parker became an unusual family. He talked to the tiger-like he would talk to another living person. This allowed him to mature quickly and would prepare him to get along with people and family in society later on. The adversities he experiences on the lifeboat, his religious knowledge, scientific teachings would prepare him as a boy but make him into a mature man. His childhood experiences and the teachings he learned in Pondicherry played a crucial role in future endeavors and allowed him to survive 227 days on the Pacific Ocean.

In conclusion, in Life of Pi, Pi deals with his adversities in a calm manner and then starts to strategize on how to survive. Even though he lost his whole family in the shipwreck, Pi stayed calm and stayed focused on the external adversities that he endured from his 227 days at sea. He wasn’t able to train the tiger and he struggles to find food and water. He faced internal and external misfortunes but he learned to deal and understand his actions as his journey continued. From his journey and the experiences that he went through have shown that experiences play a major role in shaping a person’s individual beliefs and personality. For example, Pi’s adverse experiences all played a role in the person he became. He had to use his knowledge of animals, teachings he had learned from schooling, and his religious beliefs “I just want to love God,” (Martel, 76). Throughout this novel, there is evidence to support that all the adversity Pi experienced on the Ocean and in life, shows how a young boy shapes into a man.

Adversity in the Novel "Life of Pi". (2020, Sep 02). Retrieved from https://studymoose.com/adversity-in-the-novel-life-of-pi-essay 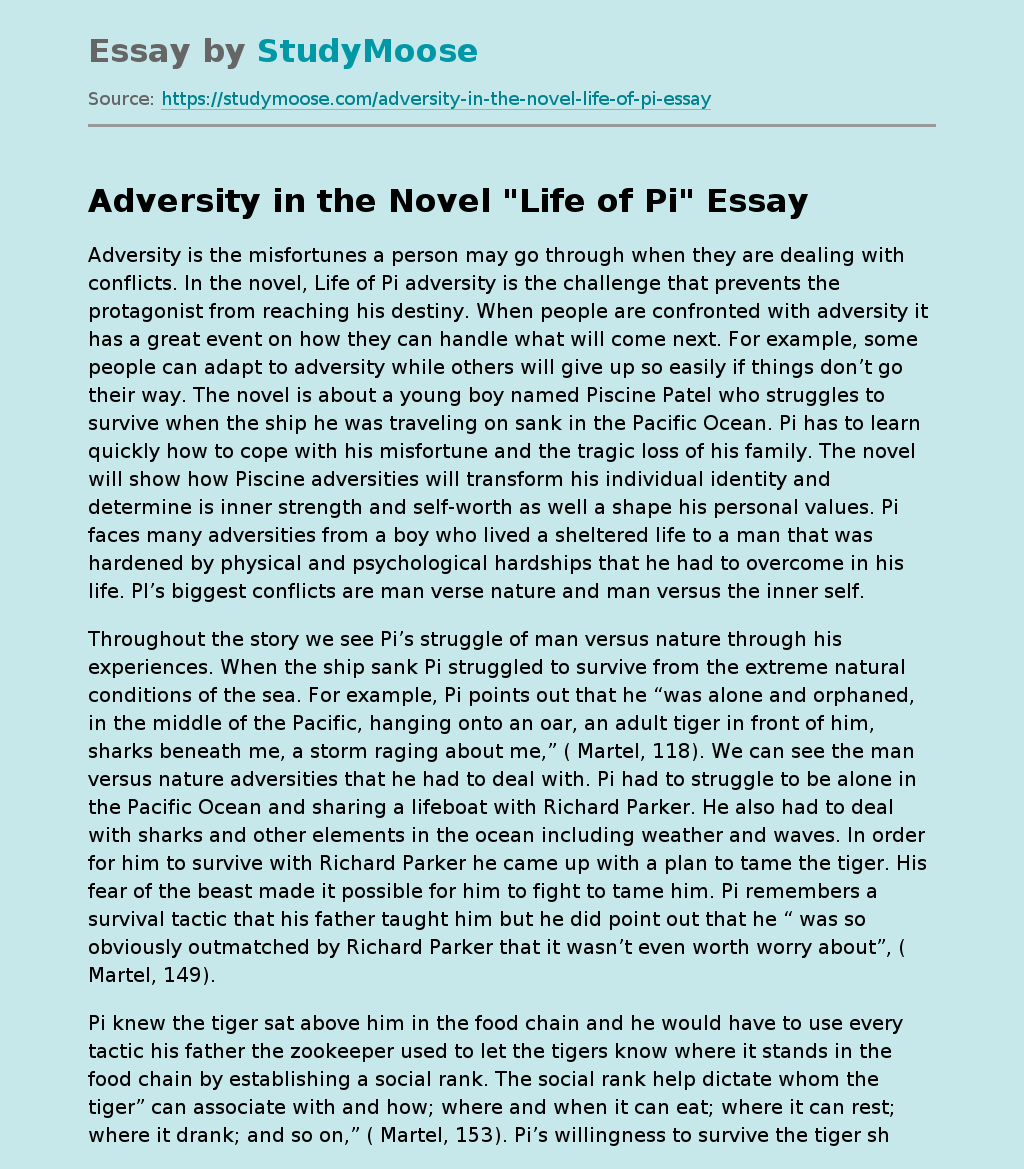