Don't use plagiarized sources. Get your custom essay on
“ Advantages of Human Genetic Engineering ”
Get custom paper
NEW! smart matching with writer

The most promising benefit of human genetic engineering is gene therapy. Gene therapy is the medical treatment of a disease by repairing or replacing defective genes or introducing therapeutic genes to fight the disease. Over the past ten years, certain autoimmune diseases – diseases resulting from a disordered immune system reaction – and heart disease have been treated with gene therapy.

Many diseases, such as Huntington’s disease, Lou Gehrig’s disease, or.

ALS, and cystic fibrosis are caused by a defective gene. The hope is that soon, through genetic engineering, a cure can be found for these diseases by either inserting a corrected gene, modifying the defective gene, or even performing genetic surgery. Eventually the hope is to completely eliminate certain genetic diseases as well as treat non-genetic diseases with an appropriate gene therapy.

Gene therapy researchers are also studying ways to improve a patient’s immune response to cancer. In this approach, the treatment is used to stimulate the body’s natural ability to attack cancer cells.

In one method, researchers take a small blood sample from a patient and insert genes that will cause each cell to produce a protein called a T-cell receptor, or TCR, which is responsible for recognizing antigens and disease fighting antibodies. The genes are transferred into the patient’s white blood cells and are then given back to the patient. In the body the TCRs then recognize and attach to certain molecules found on the surface of the tumor cells.

Finally, the TCRs activate the white blood cells to attack and kill the tumor cells. Scientists are also investigating the insertion of genes into cancer cells to make them more sensitive to chemotherapy, radiation therapy, or other treatments. In other studies, researchers remove healthy blood-forming stem cells from the body, insert a gene that makes these cells more resistant to the side effects of high doses of anticancer drugs, and then inject the cells back into the patient.

Human genetic engineering can also be used as a disease preventative by increasing ones immunity. People infected with a serious illness may not show symptoms of the disease for long periods of time. These latent, or inactive, infections can develop into an active disease without warning and also can be passed on to others. This new approach focuses on controlling or stimulating the immune system to cure latent infections and prevent them from causing disease. This research in immunity has the potential to significantly reduce illness, death, and disease transmission.

An example of this preventative application is the improvement in the treatment of HIV. The AIDS/HIV disease is a viral infection that destroys immune responses. The disease can be treated with drugs, however these drugs do not eliminate the virus from the body. Currently a patient must remain on these drugs for the remainder of their life. The purpose of genetic engineering’s pre-clinical studies is to advance towards clinical trials with a cell-based method of enhancing the patient’s own immune response against the virus. This approach involves identifying anti-HIV receptors that will be introduced into the patient’s own blood-forming stem cells. This approach has the potential to provide long-term immune control of virus replication, and may require only one or a few administrations.

Another benefit from the study of human gene altering is with the creation of new drugs. Pharmaceutical advances in genetic engineering have made it possible to use plants as factories for protein production. Plant-made pharmaceuticals are made by inserting a segment of DNA that encodes the protein of choice into plant cells. The plants or plant cells are essentially factories used to produce the desired proteins and are only grown for the purpose of human pharmaceuticals.

An example of this pharmaceutical application is gene splicing, one of the earliest uses of genetic engineering. Gene splicing was first used to manufacture large amounts of insulin, which was made using cells of E. coli bacteria. Interferon, which is used to eliminate certain viruses and kill cancer cells, is also a product of genetic engineering. Another byproduct is a type of human growth hormone; it’s used to treat dwarfism and is produced through genetically engineered bacteria and yeasts. Today, research in the field of human genetic engineering continues to be used in the production of a variety of drugs and hormones for medical advantages. 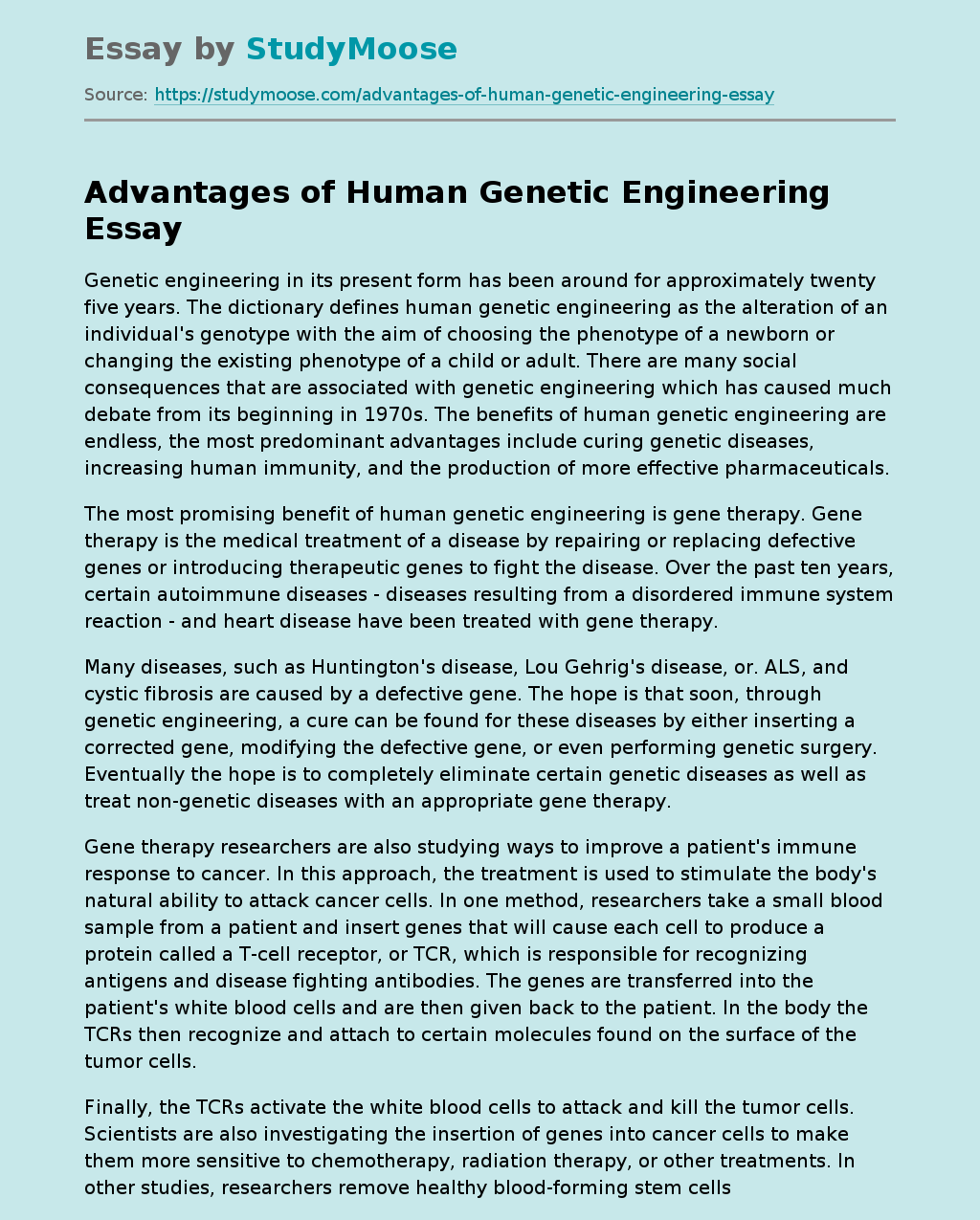