Advantages and Disadvantages in Sport Technology

Technology in sports is constantly changing in today’s era. This change is making a big impact, whether the technology is a disadvantage to the sport and slows down the speed of the game or uses the technology to an advantage and speeds the game up to help make accurate calls. People are always looking for the technology to be able to get ahead of other opponents. The use of technology has crept into the athletes’ games. Technology may not be a drug but a large amount of people use it.

Turn in your highest-quality paper
Get a qualified writer to help you with
“ Advantages and Disadvantages in Sport Technology ”
Get high-quality paper
NEW! AI matching with writer

It is hard to say whether the use of technology is more of an advantage or disadvantage.

One of the main reasons technology compromise a sport experience is that people are watching the games at home instead of watching the games that are played live. Some people would rather stay at home than spend the money to go to the game. With the games being shown on television that means fewer supporters in attendance.

Fewer supporters mean less money for the teams in terms of income and profits. The enhance experience of technology has made it easy for teams to know and learn about the opposite teams. Some people believe that it was necessary for technology.

The technology used in the National Football League has come a long way. For example, the “1st and Ten” graphics system has enhanced the football game to another level. The purpose of the “1st and Ten” line is displayed in a yellow color that shows the yards needed to make a first down.

This system displays live to the television viewers only, it does not physically show on the field of play. The example I chose that enhances or compromises the sport with technology is in football with the use of instant replay, during a National Football League game.

Everyone knows that the umpire or the referee is not always right. With football, the coaches are allowed to throw out a flag of their own and challenge the call on the field. The challenges are made toward the disputed call made by the on-field referee and they pass it on to the television official. If the official did not get the call right and the instant replay shows it as such, the team retains the time out and wins the call. If the instant replay shows what the official called, the team loses the call and a time out.

The monitors are positioned in several spots on the field so the camera can capture the play at different angles whether it is in slow motion or game speed. The technology of instant replay sounds good to the viewers at the game or at home, but there is a lot of pressure for the official to get the call right. The instant replay can distract the players from the game or make them lost momentum if the process takes too long. Some challenges are considered thoughtless or in vain as a distraction.

There are problems with the instant replay system that needs to be leveled out, but the system allows the game to get a stage future in technology in sport. Possible guidelines for the use of technology in spot are first of all the instant replay. The officials in the booth should be able to make the decision about the disputed play to save time and keep the game going smoothly. As far as clothes goes, the Haptic Sports Garment is a clothing line that should not be used during game time. The garment helps the athlete to uphold the most advantageous speed.

In relevance to the Internet, the applications Venuing and Twackle are used by fans where they get involved with the players and teams to much. Next is the use of the DVD. The player’s highlights are being displayed to the scouts to use them to their advantage. A scout should not be allowed to get a highlighted DVD of a player unless they have the player’s permission. Finally, the swimming designer Speedo’s that bonds seams ultrasonically and reduce drags with the fabric made of water-repellent should not be used if all the swimmers are not using them during the race.

Advantages and Disadvantages in Sport Technology. (2017, Mar 02). Retrieved from https://studymoose.com/advantages-and-disadvantages-in-sport-technology-essay 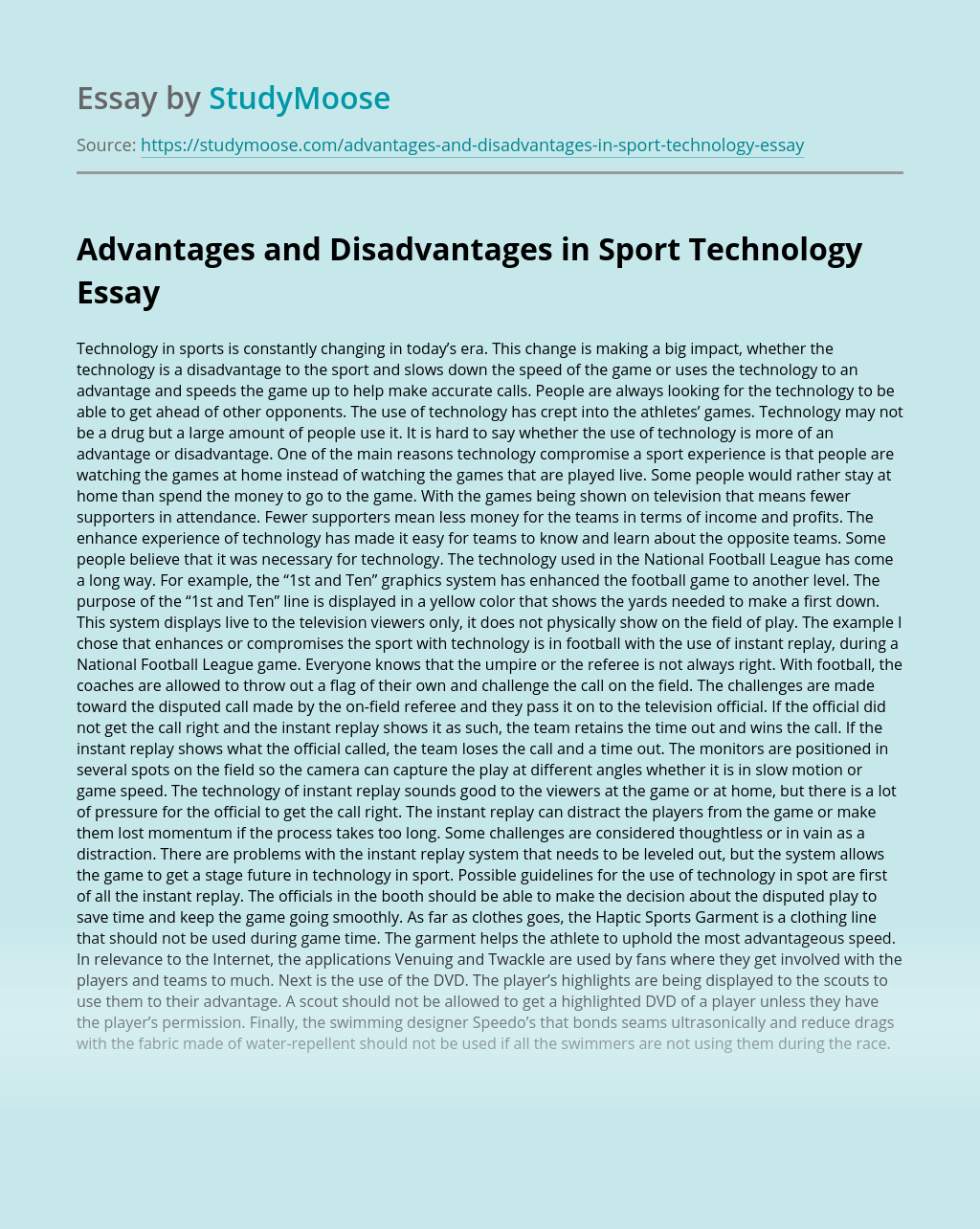 Turn in your highest-quality paper
Get a qualified writer to help you with
“ Advantages and Disadvantages in Sport Technology ”
Get high-quality paper
Helping students since 2015
Stay Safe, Stay Original