The society develops with unbelievable speed, from telegraphy, telephone, radio of 19th century to the modern 21th century, which is the Age with rapid developing and growing of knowledge and information. For example, Internet has been used widely everywhere in the world. We call it “global, Web-based platform, this platform enables people to connect, compute, communicate, compete, and collaborate anywhere, anytime to access limitless amounts of information, services, and entertainment”(Rainer & Cegielski, 2011 ).

It is so obvious Information technologies benefit us a lot; in the meantime, IT also can raise new ethical problems.

Turn in your highest-quality paper
Get a qualified writer to help you with
“ Ethical Issues in Information Technology ”
Get high-quality paper
NEW! AI matching with writer

Ethics is a system of moral principles, or branch of philosophy dealing with values relating to human conduct, with respect to the rightness and wrongness of certain actions and to the goodness and badness of the motives and ends of such action. They include responsibilities, accountability and liability. “The major ethical issues related to IT are privacy, accuracy, property, and accessibility to information” (Rainer & Cegielski, 2011).

Privacy is the state of being free from unsanctioned intrusion.

Now the right to privacy is considered by federal government as common law. Solution Usually after huge damages or losses of some individuals, organizations or institutions, government comes up some privacy act for regulation and protection purposes. Privacy policies are an organization’s guidelines for protecting the privacy of customers, clients and employees. They are an attempt to reduce crimes such as privacy, copyright infringement; identity thief.

The U. S. Congress implemented Acts address the ethical issues necessitating the creation of the acts and the advances in it.

Let’s see the following examples. Do Not Call Implementation Act We know organizations are able to collect, integrate, and distribute enormous amounts of information on individuals, groups, and institutions through computer networks. For example, a lot of people experience receiving commercial calls for business selling or survey, waster people’s phone bill and disturb personnel lives.

According to “National Do Not Call Registry” (2011), “Congress passed the Do Not Call Implementation Act on January 7, 2003. The Federal Communications Commission opened registration for the Do Not Call Registry on June 27, 2003 in order to comply with the Do-Not-Call Implementation Act of 2003. The program has proved quite popular: as of 2007, according to one survey, 72 percent of Americans had registered on the list, and 77 percent of those say that it made a large difference in the number of telemarketing calls that they receive (another 14 percent report a small reduction in calls).

Another survey, conducted less than a year after the Do Not Call list was implemented, found that people who registered for the list saw a reduction in telemarketing calls from an average of 30 calls per month to an average of 6 per month. ” No Electronic Theft Act Intellectual property is the intangible property created by individuals or corporations that is protected under trade secret, patent, and copyright laws (Rainer & Cegielski, 2011 ). The most common intellectual property concerns related to IT deals with software. Copyright software without paying the owner is a copyright violation.

We heard a lot of complains from copyright victims. It is very unfair for the people gain benefits by stealing the other people’s achievement through hard-working. “Congress enacted the No Electronic Theft (NET) Act in 1997 to facilitate prosecution of copyright violation on the Internet. The NET Act makes it a federal crime to reproduce, distribute, or share copies of electronic copyrighted works such as songs, movies, games, or software programs, even if the person copying or distributing the material acts without commercial purpose and/or receives no private financial gain.

Prior to this law being passed, people who intentionally distributed copied software over the Internet did not face criminal penalties if they did not profit from their actions. Electronic copyright infringement carries a maximum penalty of three years in prison and a $250,000 fine” (University Information Technology Services, 2010). Conclusion There have been advances in IT that have been an asset to business today. The advances can reduce risk, minimize cost, and maximum efficiency.

When we take advantages from IT, we still need protect privacy and intellectual property. Whether you run your own business or work in a large company, you’ll be challenged by these issues, and you’ll need to know how to deal with them. We need learn how to identify the threats to information security, and understand various defense mechanisms to protect information systems. Let’s follow the privacy act to avoid the ethical issues in IT field. In that way we can protect ourselves and enjoy the benefits which the modern information technologies bring to us. 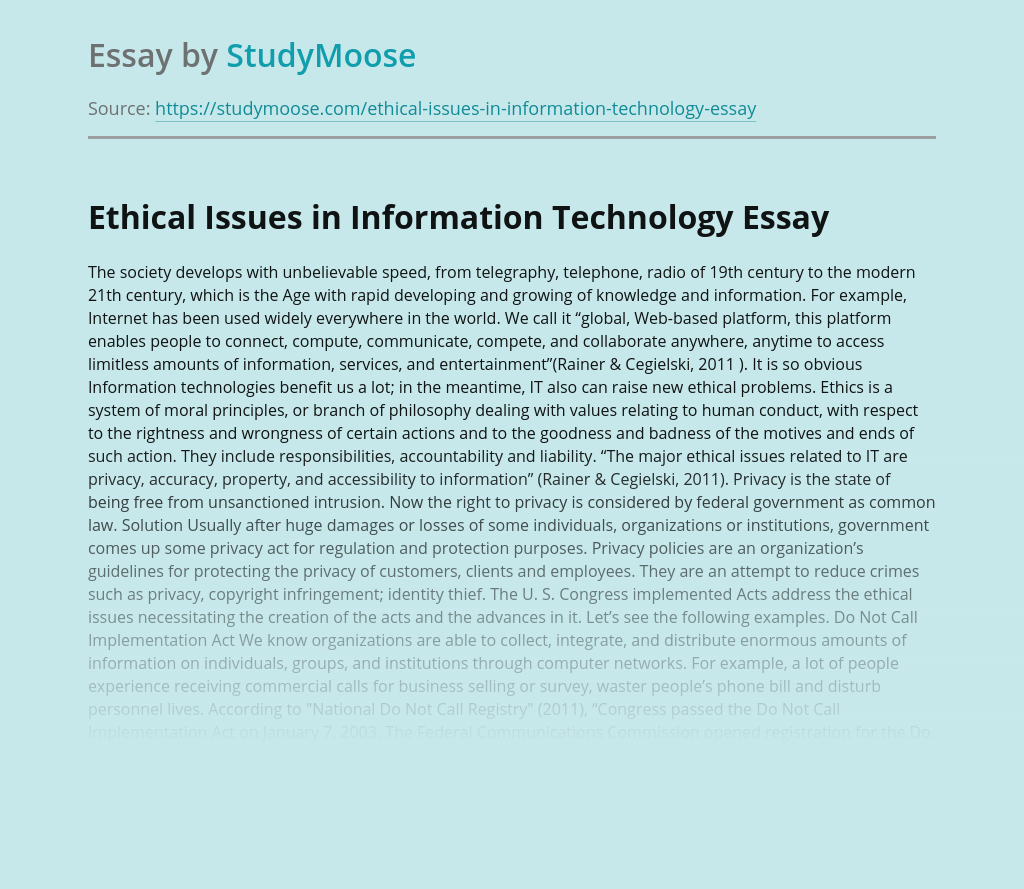 Turn in your highest-quality paper
Get a qualified writer to help you with
“ Ethical Issues in Information Technology ”
Get high-quality paper
Helping students since 2015
Stay Safe, Stay Original