Death by Landscape is a short story, written by Margaret Atwood in 1990. The Author is a Canadian novelist, poet and essayist as well as an environmental activist and feminist with many national and international awards for her writings and activities. She was born in Ottawa, Canada and started to write when she was six years old. At the age of 16 she already knew that she wants to become a professional writer. She grew up in the outback of northern Quebec, maybe that’s the reason for her love to nature and northern environments and this is what builds the frame of most of her works.

The story was first published in 1991 and is a part of her short story collections. Death by Landscape describes the uneasy living with implanted guilt because of being accused of something what never happened or of just being at the wrong place to the wrong time. Margaret Atwood writes about an elderly woman, Lois, who lives in an apartment in Toronto (page1.

block1). Lois brought her collection of paintings with her when she moved in this apartment from her former family house. These paintings are all landscapes of the Canadian outback and countryside with forests, trees, lakes and islands.

Her husband Rob already died and her boys already grew up. She is living alone, alone with her memories, especially the memory to one particular happening in her youth when she grew up and went camping in a summer camp in Canada’s northern forests. She went to this camp “Manitou” since she was nine years old and since she was ten she had a special friend – Lucy – coming along to this summer camp with her.

Lucy was from the United States, from Chicago, and she was brought to this summer Camp Manitou because her mother was Canadian and went also to this camp when she was young (p. ,bl. 3, par. 3/4).

Her father who lost one eye in the war was American. When Lois was fourteen they went on a one week canoe trip which was Lois first- and her last one (p. 1, bl. 2). In this year – Atwood writes on page three block three – Lucy was different. She had different interests and did other things than in the past summer camps. Her father had a new wife, her mother a new husband. Lucy had a boyfriend who was sixteen and worked as a gardener’s assistant. She wasn’t happy with her stepfather and didn’t want to live with her father either.

She wanted to run away from home (P. 3, bl. 3). When they left the camp to their canoe trip another character is introduced to the story. This is Cappie, the boss and the owner of Camp Manitou, who got the camp from her parents, and now – in the costume of an American native – sends the girls on their trip to the Canadian wilderness. Cappie wanted to be an Indian, adventurous and pure and aboriginal. The first two days of the canoe trip passed normally and nothing dangerous or spectacular happened. But then Atwood describes the third day on page 5 block one.

They reached camp three “Little Birch” and Lois remembered any details of the happenings to the present day. Lois and her friend Lucy wanted to go on a lookout point, a cliff high above the water, to have a look at the view from there. On top of the cliff Lucy wanted to take a pee and Lois gave her some toilet paper. To give her privacy she walked away and let Lucy alone, just a few steps, just a few minutes. Lois heard Lucy shouting, no shout of fear, not a scream (page 6, block 1 at the end). When she returned to pick up her friend Lucy wasn’t there anymore.

Lois got a shock and returned to the others. All searches remained unsuccessful. Lucy was gone and no one knows where she was, there was no trace of her at all. They broke up their trip and returned to Camp Manitou. The Police was looking for Lucy with dogs but couldn’t find a trace. Because of the loss of a child the camp did not survive. It was closed later. Cappie had a last questioning with Lois and asked Lois what she had talked with Lucy before she had disappeared.

Lois told her that Lucy talked about diving from the cliff but Lois answer was “you have to be nuts” (p. ,bl2). Then Cappie said, “sometimes we are angry and we don’t know it, we lose our temper”. She was accusing Lois of pushing Lucy off the cliff. This was unfair and hits the girl like a slap (p. 7,bl. 2). – Now Lois is an old woman living alone in her apartment and realizes that she lived all her life with a feeling of guilt implanted in her fourteen year old head by Cappie, the owner of the camp. Death by Landscape does not end at this point. Lois is looking at the paintings on her wall. In all her paintings she sees her friend Lucy and she still can hear her shouting.

On page eight block one Atwood writes that a dead person is a body and occupies space, a grave, but Lucy has no body, no grave. She only exists in Lois’ mind and – in her pictures on the wall. “You can’t see her exactly, but she’s there…” (page 8, block 2). Everyone has to be somewhere and the paintings are where Lucy is. In Lois’ mind she is still alive. Lois was going through the happenings of this particular day again and again, throughout her life, torturing herself with guilt and never really finding peace.

This feeling of guilt was implanted in her mind from the frustrated owner of Camp Manitou, knowing about the consequences of the loss of a child in her camp. Lois knew that she didn’t push Lucy off the cliff, but she left her alone, just for a moment, unattended and unwatched, knowing about her unhappy family situation, knowing Lucy didn’t want to return to her family (p. 5, bl. 2). When Lucy said that she didn’t want to go back to Chicago this indicates even possible thoughts of suicide. As an adult Lois was able to see this, but as a fourteen year old child, as a friend of Lucy…?

Lois had to live with this guilt all her life. Cappie, the owner of Camp Manitou wanted to have a reason for the loss of her camp. She wanted to have somebody to blame. She got what she wanted, not for the press, not for the police, but for herself. Lois said “Ididn’t! on page 7 block 2 and Coppie answered “didn’t what Lois? ” – push my friend… – left my friend… – hit my friend… – we don’t know exactly what Lois didn’t do, but Cappie planted guilt in the teenagers head, guilt the little girl had to live with for the rest of her life.

Cappie needed an excuse for her own failure. Atwood’s story is very thrilling, entertaining and exciting. There are actually two stories in one. The first one is the story of Lois, the old lady living in her apartment in Toronto, thinking of her past, of her entire life. She could hardly remember important things of her life, what her husband looked like, the birth of her boys, but one life changing event she remembered in all the details like it had happened yesterday. On the other hand is the story of the young Lois and the terrifying disappearance of her friend Lucy.

There is a lot of foreshadowing in the story what makes the reader suggesting that something terrible might happen. On page one block two Atwood writes it was Lois first canoe trip and it was her last one. The reader can already imagine that something bad happens to her on this trip. Another example is to read on page three block three when Atwood writes that she – Lucy – wants to run away from home. Also Lucy herself indicates later in the story that she doesn’t want to return to Chicago and finally on the cliff she tells her friend that it would be quite a dive off here (p. 5,bl. at the end).

Atwood also uses allusions in her story. On page one block two she describes the reason for Lois to buy all these landscape paintings . She wanted something that was in them, although she could not have said what it was at the time. At the end it was her friend Lucy whom she saw in all these paintings. On page three in block two the author writes that Lucy always had a surprise or two. Something to show, a marvel to reveal. The reader immediately wants to know what is it, what does she have to show? This makes the story so exciting and keeps the readers curiosity.

Canadian children go to a summer camp sooner or later in their lives. It is a part of their education. Nature is never far in Canada. Therefore everything is intimate and familiar, nothing is really strange for a Canadian reader. When the kids hang their open food into the trees to save it from eventually appearing bears the Canadians can find themselves in the story. The major happening itself is something we can find in nearly every daily newspaper. Kids disappear, are missing, being killed or accidently die. Everybody can imagine the shock of the participators.

To conclude the Death by Landscape Margarete Atwood drew a wonderful picture of her Canadian home country in a captivating story. Enhancing the reader she reminds the necessity of intact families, the taking care of growing up children and the unpredictable things that can happen. Also Atwood describes the terrifying feelings of guilt which can drive someone to delusion and madness. Lois never forgot her friend in all those years, she still hears her voice and sees her image in her landscape paintings. This gives her friend Lucy a place for her body which has never been found in the Canadian wilderness. 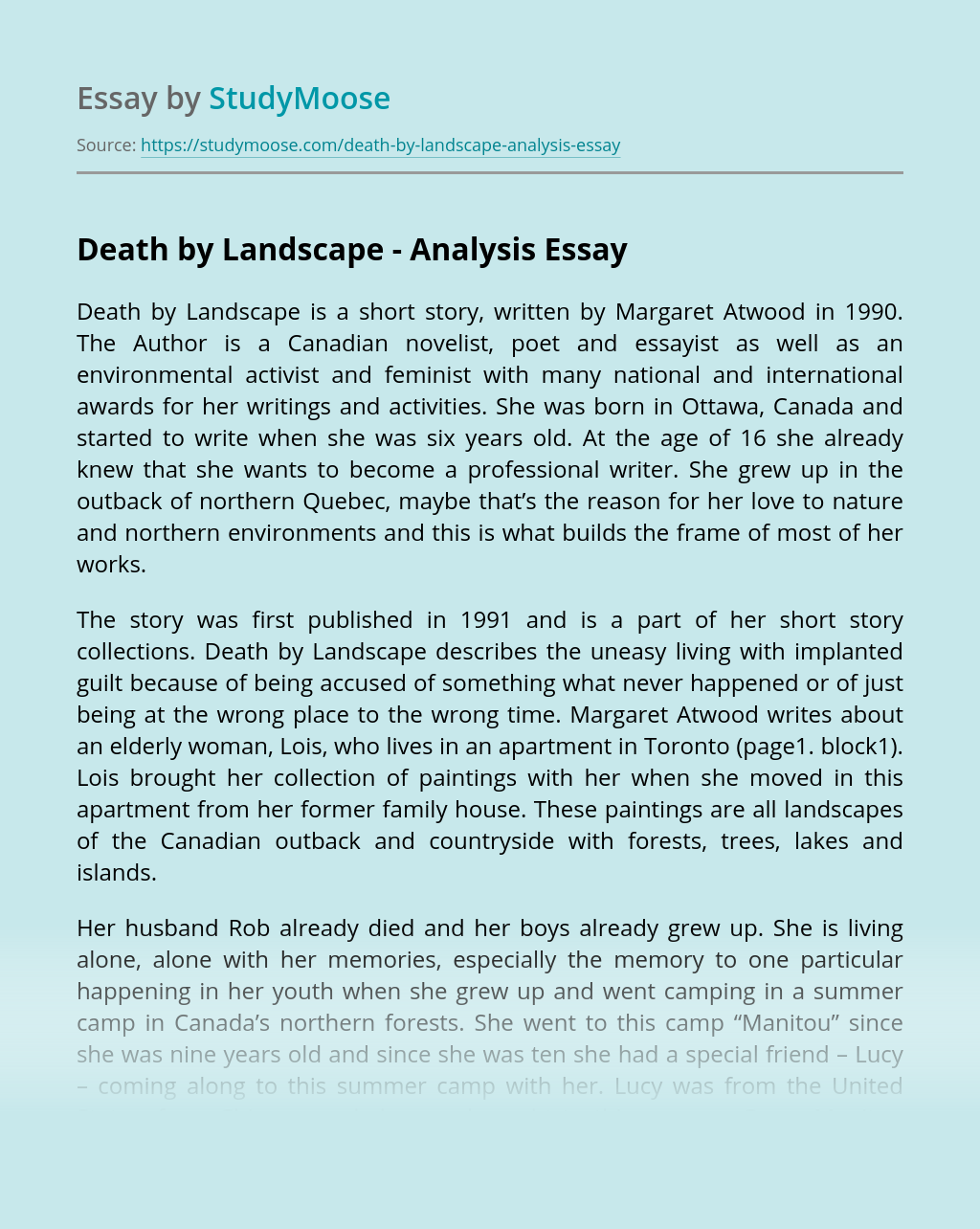 Don’t waste time
Get a verified writer to help you with Death by Landscape – Analysis
Hire verified writer
$35.80 for a 2-page paper
Stay Safe, Stay Original