The Evolving Courtship in the Philippines

The traditional way of courtship in the Philippines is extremely different from the western culture. It is far more submissive and indirect, and it involves stages or phases. Throughout the years, Filipino dating culture has evolved due to western influences particularly in our generation. Some Filipinos keep the traditional or the conservative way, others embrace the more liberal practices, while some combine the two.

“Courtship is the best part of a girl’s romance and love life”.

Don't use plagiarized sources. Get your custom essay on
“ The Evolving Courtship in the Philippines ”
Get custom paper
NEW! smart matching with writer

This is the reason why there have been a lot of rituals involved in the earlier courting practices. Thus, in those times, before they get married they are able to enjoy the labors of a suitor for her love even if it takes a year or more of courtship. The kind of rigorous courtship practice that is well supervised by guardians is different from the west and one of these significant differences is dating. But it is totally different this time.

Modern courtship in the Philippines is like the tagline of Sulit.com – “Hanap, Usap, Deal”. Group dating and Online dating are popular forms in finding potential partner. Modern Filipina may encourage courtship but she can also initiate the dating process.

If a man wants to be taken seriously by a woman, he has to visit the latter’s family and introduce himself formally to the parents of the girl.

It is rather inappropriate to court a woman and formalize the relationship without informing the parents of the girl. It is always expected that the guy must show his face to the girl’s family. And if a guy wants to be acceptable to the girl’s family, he has to give gifts every time he drops by her family’s house. It is said that in the Philippines, courting a Filipina means courting her family as well.

Traditional courtship was participated in or controlled by the parents and other kinsmen. A man who is interested in courting a woman has to be discreet and friendly to her family, in order not to be seen as too aggressive or too conceited. There are a lot of restrictions and rules to be followed in order to receive the sweetest “yes” of the woman and her parents. This system was rooted in the Filipino view that marriage was a union not only of two individuals but also primarily of their families. But this time, texting is one way of modern Filipino courtship communication.

During the old times, Filipino men would make serenade for the women at night and sing songs of love and affection. The man is usually accompanied by his close friends who provide moral support for the guy, apart from singing with him. In return, Filipino women are expected to be playing hard to get because it is seen as an appropriate behavior in a courtship dance. By being hard-to-get, the girl tells the man that he has to work hard to win her love. It is also one way by which the Filipina will be able to measure the sincerity of her admirer. Some courtships could last years before the woman accepts the man’s love. (Francisco, 1974)

(Explanation of the Example)

Serenading or Harana is one of the most popular way of courtship. This is basically a Spanish influence. But today, to serenade the girl, one can hire a professional singer, a singing telegram or request a love song from the radio station. A traditional Filipina maiden is someone who is modest, shy, well-mannered, with good upbringing, and does not show her admirer that she is also in love with him immediately. A Filipina is also not supposed to go out on a date with several men. If the suitor wishes to go on a date, the girl will only be allowed with a chaperone. But with the use of mobile phone and social media, Filipinas are allowed to participate with the dating process without the interference from their parents. Dining out is the most common way of dating. The couple can also watch movies, play sports together, and watch concerts. Travelling and going on coffee houses are also gaining popularity nowadays.

For the eager suitor, one way of showing his sincerity and dedication is by doing difficult household tasks like fetching water in the well and chopping the woods to be used as their “panggatong”. Writing love letters is also proven to be an effective way of stealing the girl’s heart.

(Explanation of the Example)

“Action speaks louder than words”. This is basically why men would prefer doing difficult tasks just to show his genuineness and devotion to the woman. Effort is a big word and much appreciated in courting a girl. But women have this weakness of believing on sweet words blurted out by men, that’s why giving love letters is an effective way of stealing the girl’s heart.

But now, efforts are seen by sending flowers, chocolates, jewelries and gadgets. These are popular gifts from a suitor to her lady love. Instead of giving hand-written love letters, suitors send e-cards or send messages on Facebook and Twitter. These are modern ways of showing love and sincerity.

These information leads to the affirmation that texting is indeed more suitable to the Filipino society and social condition nowadays. The change in society became rapid as humans maximize the use of technology. This texting custom of courtship in the modern age opened more doors to the possibility of younger age groups to participate without hindrance from parents and more experience for romance.

Fifty years from now, we are already the frustrated parents of the next generation. Most probably, relationships won’t undergo courtship anymore. With the immense effect of technology on our custom of courtship, there is no doubt that the essence of courtship would no longer be visible until it is no longer a practice.

The Evolving Courtship in the Philippines. (2016, Apr 12). Retrieved from https://studymoose.com/the-evolving-courtship-in-the-philippines-essay 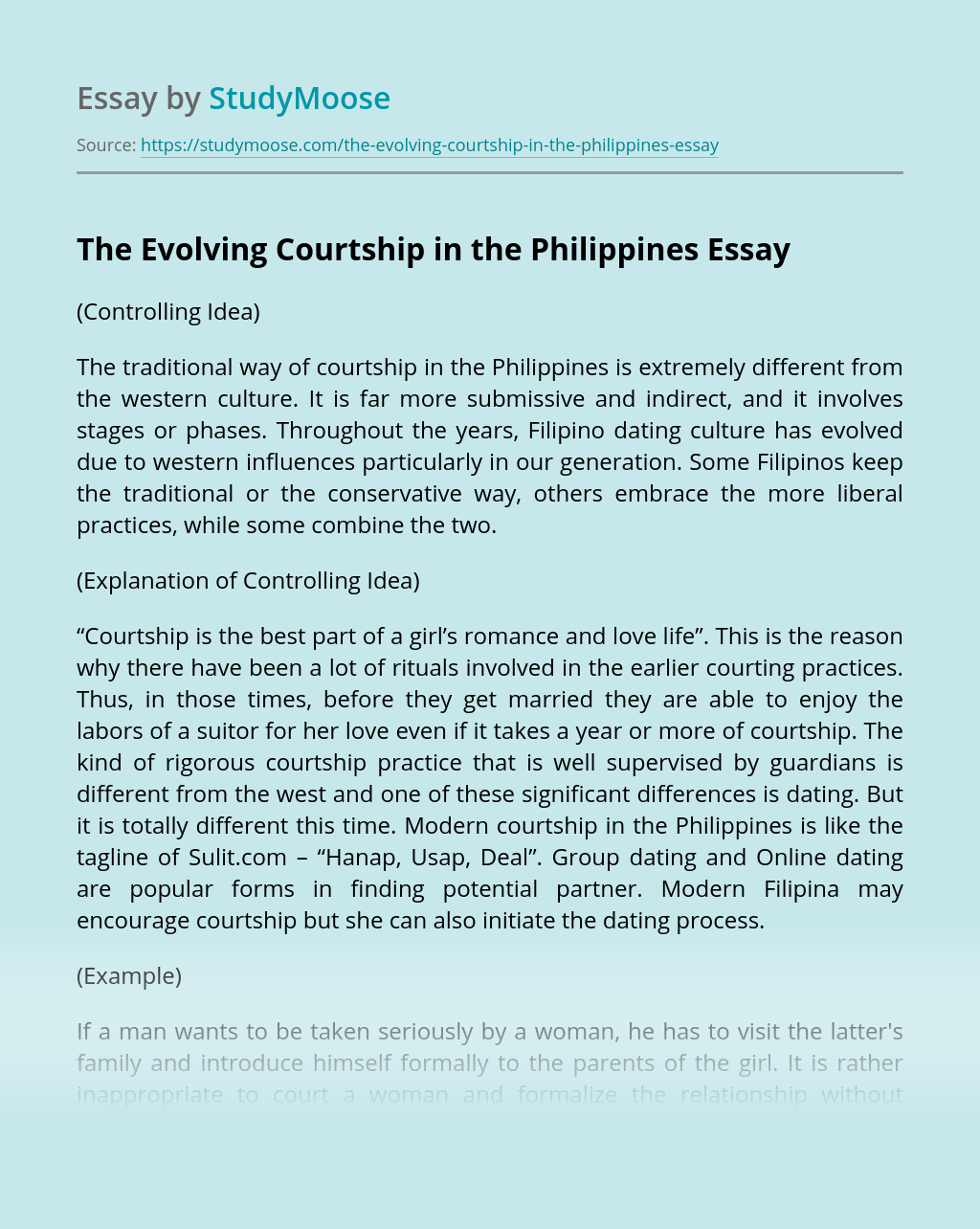