Advantage and disadvantages of social networking

Since the advent of social networking sites such as Facebook and Twitter, there has been much debate on their benefits and detriments. While social networking sites are a useful tool in our increasingly connected world, they can also adversely affect our development and the nature of our social interactions. Hence, it is important to first identify their advantages and disadvantages to effectively use them.

Social networking sites offer a medium for people to keep in touch with their acquaintances and maintain constant contact with their friends.

Don't use plagiarized sources.
Get Your Custom Essay on Advantage and disadvantages of social networking Just from $13,9/Page

This increased connectivity opens new paths for relationships to be built and bonds to be strengthened. In this way, social networking sites help to complement and enhance a person’s social experience. Sites such as Facebook and Tumblr allow people to find out more about their friends’ interests, as well as their personal lives, which can lead to more fruitful conversations and discussions, leading to better and stronger relationships.

Additionally, social networking sites help people to share their thoughts and feelings with one another.

Twitter is an example where this sharing of thoughts is facilitated in an innovative way. Displaying trends allow people to find out about current events and keep up with the news. By linking Twitter to other social media like Facebook and Instagram, it opens more possibilities for sharing and learning.

On the other hand, social networking sites deprive us of face-to-face interaction, which is detrimental to the development of social skills, especially for adolescents. By removing opportunities for direct social contact, our ability to interpret expressions and decipher tones decreases, affecting future interactions with others as well as our relationships. Lack of face-to-face interaction can also affect our emotional health as we require the intimacy and affection of fellow human beings to achieve emotional stability.

Use of social networking sites also results in more opportunities to fall prey to scams and other online threats. Certain sites can be utilized by hackers to introduce viruses in various ways, or by scammers to con unsuspecting victims. Social networking make victims feel safe as they believe themselves to be surrounded by friends, making it easier for them to fall prey to such threats. Furthermore, social networking has increased cases of cyber-bullying, especially prevalent among youths, which causes harm to victims and in extreme cases, can lead to depression and lead to suicide. The perpetrators of these acts can remain anonymous in an online setting and can continually harm and threaten victims, causing much distress. Evidently, such dangers cannot be taken lightly.

In conclusion, social networking sites offer great benefits when effectively utilized, but as with all tools, it inherently possesses some risks and problems which must be mitigated. As social media continues to evolve, we can only hope it changes for the better and continues to enhance our social lives.

Advantage and disadvantages of social networking. (2016, Apr 18). Retrieved from https://studymoose.com/advantage-and-disadvantages-of-social-networking-essay 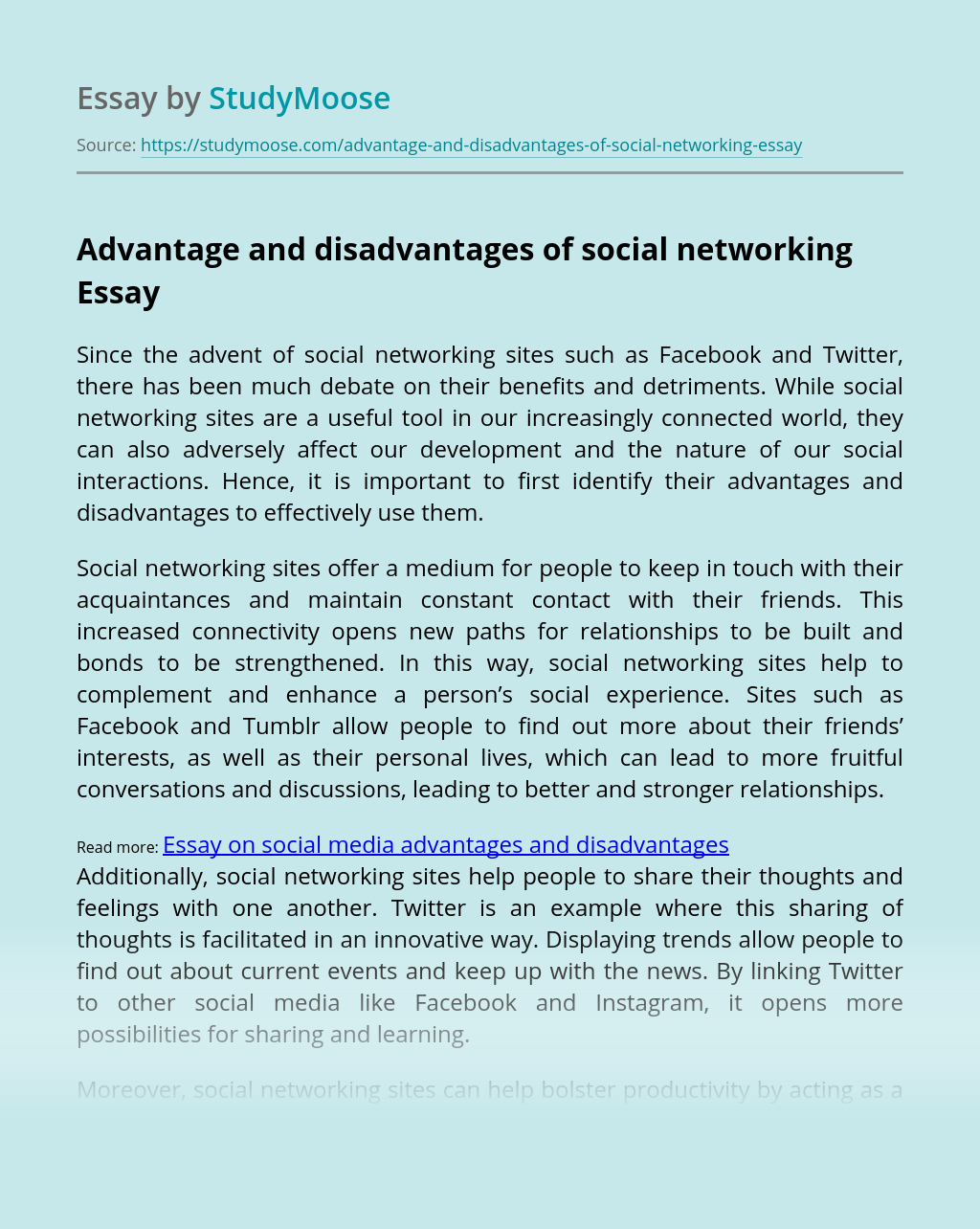 Happy moment in my life

Social media network are becoming progressively essential in college as the format of course delivery modifications to consist of hybrid and online designs, and as the social media provides trainees a way to stay in touch, developing in person like discussions and other interactions far from the physical class. From this perspective, social networks are...

Social Media and Networking Relationships Social media and networking gives individuals the power to connect and interact with each other. Social media enables open communication, and allows individuals from different geographical locations to express and share their opinions. Networking is an element that is used with Social media. As mentioned, “Networking has potential to open...

In today’s society, billions of people across the world are accessing the internet multiple times a day. Why wouldn’t they? Many people have the internet on their smart phones, and at the touch of a button can check their email, their Twitter, their Facebook, their bank account balance, you name it. Any social networking site...

Topshop, one of the huge name on the planet fashion’s industry has recently arrived in Vietnam on March 13th, 2013. Located in Bitexco Financial Tower, the renowned structure of the vibrant Ho Chi Minh City, Topshop has received rather good attention to foreign visitors and Vietnamese, who have actually understood about this famous brand. Its...