When picking my adolescent I had quite a few choices to pick from but I decided on my adolescent 15 year old sister since I know a lot about her and have seen first-hand how she is coping with this adolescent stage. Patricia is a normal 15 year old girl still in high school. She lives in a household of 7 with 3 older siblings and one younger one. She mentioned that she lived in a small home with three dogs, two fish, a bird and six other humans.

Don't use plagiarized sources.
Get Your Custom Essay on Adolescent Interview Just from $13,9/Page

Both her parents are field workers so they aren’t really at home much. Patricia has a younger 7 year old sister that she pays attention to a lot, they have a really close relationship, and she cares for her younger sister when her mother is at work. Patricia is in a special program in her high school called the International Bachelorette Program “IB,” this program challenges high school students and gives them and idea of what college is like after they graduate.

She gets a lot of homework every day for all her classes, she manages to do all of it and still helps take care of her younger sibling.

I think my teenager didn’t quite fit in the conceptions people have of a typical adolescent. She seems to be really close to her family. When I asked her what her family life was like I was surprised with the answer she gave me. She said she loved her family and that they were the best. Most teens at her age tend to distance themselves when they hit puberty. Puberty brings an increase in parent-child conflict- psychological distancing that may, in part be a modern substitute for physical departure from the family. (Berk, 2012, p.541.) According to what my teen said about her family life, she has a very good relationship with her family; her parents seem to play an important role in how hard she is working on her education and her good grades since she mentioned that school was really important to her because her mother wanted her to have a better life for herself. I believe that my teen interviewee has reached the stage of formal operational thinking. When I asked her what if people had no thumbs she gave me a bunch of explanations as to what would happen if such a thing were true.

She said people wouldn’t be able to text, suck their thumbs, cover the sun, be able to thumb print criminals for criminal cases, be able to write, click on the computer mouse, do their hair, and that everyone would be ugly. She pretty much hypothesized what would happen if people had no thumbs. According to Piaget she has become capable of hypothetico-deductive reasoning- this being when faced with a problem, they start with a hypothesis, or prediction about variables that might affect an outcome, from which they deduce logical, testable inferences. (Berk,2012, p.566.) Her answers to the problem of having no thumbs were thought out. I wish she would have explained them a little more but I know if I asked her to explain more thoroughly she would have the logic for doing so.

Propositional thought is also a characteristic of formal operational thought; it is when a young individual can evaluate the logic of verbal statements without referring to real-world circumstances. (Berk,2012, p.595.) When I asked her question number 13 of the interview she gave me a smart remark saying “Duh it’s going to make a freaking noise if she hit it. No she did not make noise because she didn’t hit it.” She said this right away and asked why I was asking such weird questions that were so obvious.

I did notice some signs of my teen forming an identity. Her style of clothing seemed to be pretty laid back. She wore a loose fitted tee shirt, some jeans, and a pair of converse. Her hair was in a ponytail and she didn’t have any tattoos or piercings. She doesn’t wear any make-up and her only concerns about her appearance were being fat. She mentioned having a lot of friends in school and the particular group she hung out with during lunch and her breaks was only a pair of two close friends. When asked if she belonged to a group she pointed out that she belonged to a group nobody knew about and all her group does is sit and talk and think about homework and. She mentioned all the other different kinds of groups she saw in her high school such as the popular kids, the jocks, the gang bangers, the Asians, the cheerleaders, the gothics, the bible geeks, and the nerds.

She didn’t categorize herself in any of these, but she mentioned that her only concerns are getting good grades, she mentioned this a lot during her interview. Constructing an identity involves defining who you are, what you value, and the directions you choose to purse in life. (Berk,2012, p. 600.) When I asked her what role school played in her life she easily told me she was pursuing getting good grades throughout high school and eventually going to college, her moral values play a great role in her life, these being the things her mother has encouraged and guided her to pursue. Her direction in life has been identified; she explained to me she wanted to eventually be able to go to really good universities. I believe my teen has formed her identity because of these things. My teens’ identity status is probably at the identity achievement; she has established her values and goals in life. Identity achieved individuals are committed to a clearly formulated set of values and goals; they know where they are going. (Berk, 2012, p.603.)

I don’t really have much advice to give to my teen; to me she seemed to be on track. But her mentioning herself as being fat does concern me. I think her self-esteem is low, when I asked her if she had a boyfriend she said she did not because she was ugly. She also seems to think she is fat, since she mentioned twice in the interview she wanted to lose weight. The advice I would give my teen is, to not concern herself too much about physical appearance and focus more on the relationships she has formed with the people she has becomes friends with. I would tell her she doesn’t have to look a certain way to have a boyfriend, I would also mention that it doesn’t really matter if she has one or not, the right one will come along someday.

Her academic self-esteem seems to be good though, while I was interviewing her she mentioned that her grades were really good and she was concerned about keeping them that way. Academic self-esteem is a powerful predictor of teenagers judgments of the importance and usefulness of school subjects, willingness to exert effort, achievement, and eventually career choice (Bleeker & Jacobs, 2004;Denissen,Zarrettt,& Eccles,2007;Valentine, DuBois,& Cooper,2004; Whitesell et al.,2009) I would tell her she should keep on pursuing her goals of getting good grades and eventually going to the university of her choice. I would tell her this because I personally didn’t pursue going to a university after I graduated from high school and have totally regretted it ever since. Having a good education is a good goal for a young individual to have to have a better life.

My interviewees’ didn’t have any signs of a cognitive distortion, there wasn’t signs of any self-focus in her answers. Imaginary audience is when the adolescent believes that they are the focus of everyone’s attention. (Berk. 2012, p. 572.) She stated in the interview that she and her friends were part of a group that nobody knew about; she showed little concern about it. Her social development is good; she said in her interview that she talked to most of her classmates in all her classes. She seems to have attained good peer relations and has established good friendships. I don’t think my adolescent would conform to peer pressuring, she mentioned in the interview that alcohol and drugs were of easy access but they have no effect on her friends and her. She said she did not pay much attention to those things. 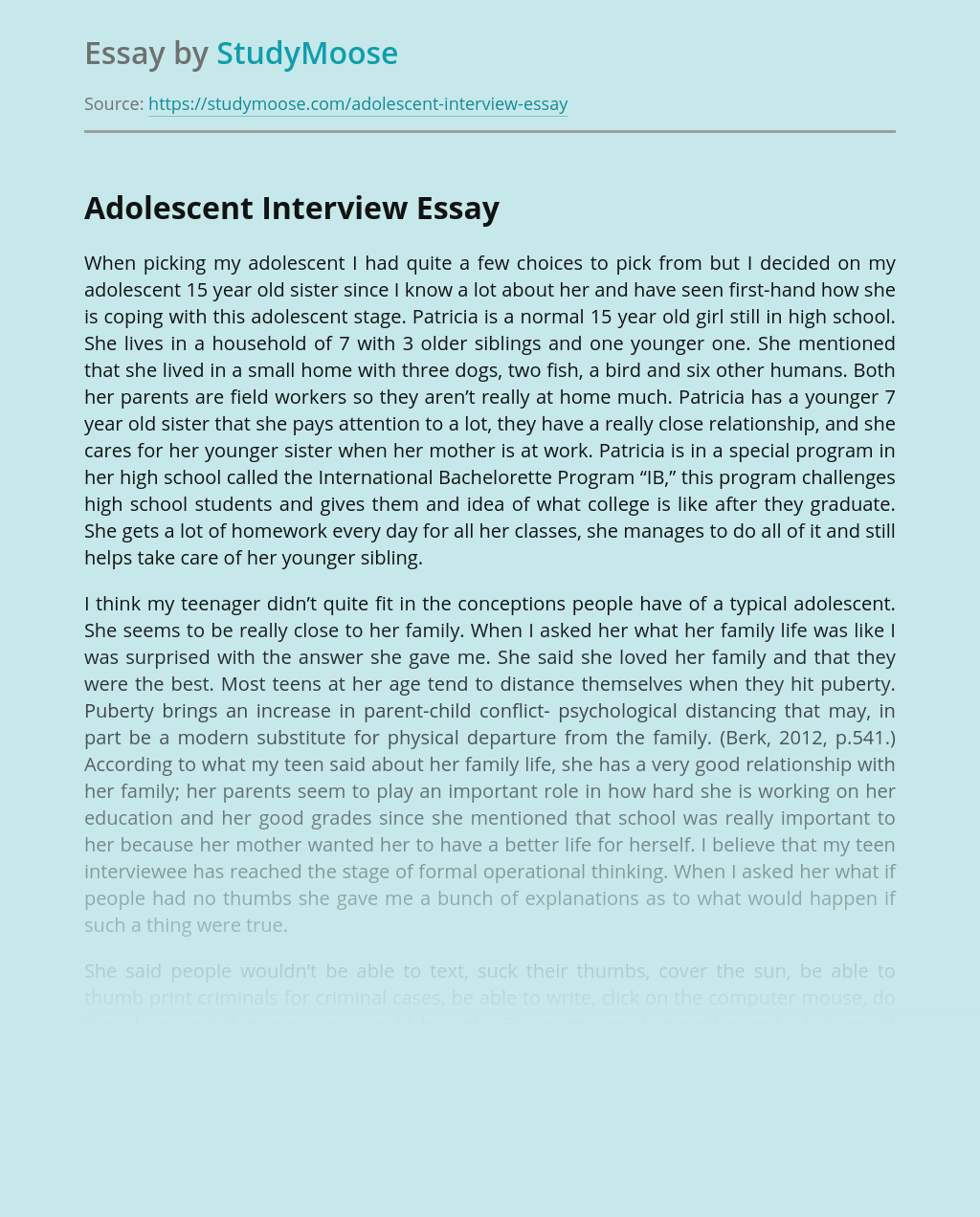 The Negative Effects of Teenage Dating

The biggest threat about teenage dating is their inability to maintain a relationship. Teenagers mostly, do not understand the necessity of sustaining a relationship over a period of time. Therefore, frequent break ups and arguments lead to attempts of suicide, teenage pregnancy, STD’s, teen violence, and substance abuse. This happens due to lack of experience...

1.0 INTRODUCTION Motivation is an important driver in an organisation and is crucial to the management of intellectual capital. Motivation underlies what employees choose to do (quality and/or quantity), how much effort they will put into accomplishing the task, and how long they will work in order to accomplish it. Employees who are motivated will...

“Se habla Espanol,” a memoir written by Tanya Maria Barrientos, was published by Borderline Personalities: A New Generation of Latinas Dish on Sex, Sass & Cultural Shifting (HarperCollins, 2004). Barrientos is a Guatemalan born Latina that was brought to the United States as a child, but failed to identify with her origins and saw herself...

View sample
The Hollow of the Three Hills from Other Website

Nathaniel Hawthorne was an American novelist and short story writer. He was born in 1804 in Salem , Massachusetts to Nathaniel Hathorne and the former Elizabeth Clarke Manning. His ancestors include John Hathorne , the only judge involved in the Salem witch trials who never repented of his actions. Nathaniel later added a “w” to...

Jus because I’m a nigger [examines luger shell from Carlson’s gun] they’d probably shoot me like Candy’s dog if it was as much fun as the scourge they put me through, [walks to window and leans against the frame] just because I’m a busted up ol’ nigger, [scowls and bites his bottom lip] no-one wants...