Contemporary approaches to international relations have been widely regarded as ineffective public policy initiatives based on ideological political agendas as opposed to practical and innovative social activism.  In their landmark book, Activists Beyond Borders: Advocacy Networks in International Politics, Margaret Keck and Kathryn Sikkink offer both an insightful theoretical background and a multi-disciplinary guide to achieving progressive activism that transcends the traditional methods (failures) of international governmental agencies and governments themselves.

With this essay I will lay out the basis for the book with the hopes of highlighting its strengths as well as pointing out possible shortcomings in an attempt to demonstrate the always challenging effort to combine forces for a common social agenda.

Don't use plagiarized sources. Get your custom essay on
“ Activists Beyond Borders ”
Get custom paper
NEW! smart matching with writer

The major strength of the book is fortified by its willingness to critique the previous short-sided solutions put forth by international governmental institutions such as the World Health Organization and the International Monetary Fund.

Their argument, based on the cultural shift of the 1960’s and accelerated through the technological innovations that facilitate both global and local communicative strategies and alliances, points toward transnational advocacy networks that ‘carry and re-frame ideas, insert them in policy debates, pressure for regime formation, and enforce existing norms and rules, at the same time that they try to influence particular domestic political issues’ (p.

199).  In this way, they are trying to both work around the existing discourse of international policy while at the same time trying to reform the discussion from within, albeit via non-governmental organizations.

This idealism can also be the shortcoming of the book as well because it breaks apart the mythological unified dimension of international advocacy groups .

The nature of the transnational advocacy groups necessitates the fragmentation of a unified group that could possibly carry the necessary force to grab the headlines and attention of groups such as the WHO and IMF.  By leaving their argument based on a symbolic narrative of ‘transnational advocacy groups’ but leaving out possibly critiques against them, the authors unfortunately invite further critique, even from parties that ideally agree with them, like myself.

One notable success story, a very tragic one at base, is the example of Cindy Sheehan and her epic battle to gain international support for trying to bring an end to the war in Iraq.  She has been fearless in her fight and in doing so has mobilized thousands of supporters throughout the international community as well as garnering a wealth of complementary media coverage that leverages her cause against an extremely vulnerable an emotionally taxing target.  Her extreme measures and lack of fear have on the one hand created a groundswell of public admiration and support, but at the same time she has run the risk of overexposure and the resulting media backlash by over saturating her symbolic politics.

This is a fine line that Margaret Keck and Kathryn Sikkink acknowledge in their research and it is part and parcel to the overall struggle that transnational advocacy groups face in their battle to garner the necessary support of intellectuals, parallel advocacy groups, sympathetic non-governmental agencies, and ultimately the financial and ideological backing of official governmental policy groups that hold the power to enact and enforce the changes that are being fought for. 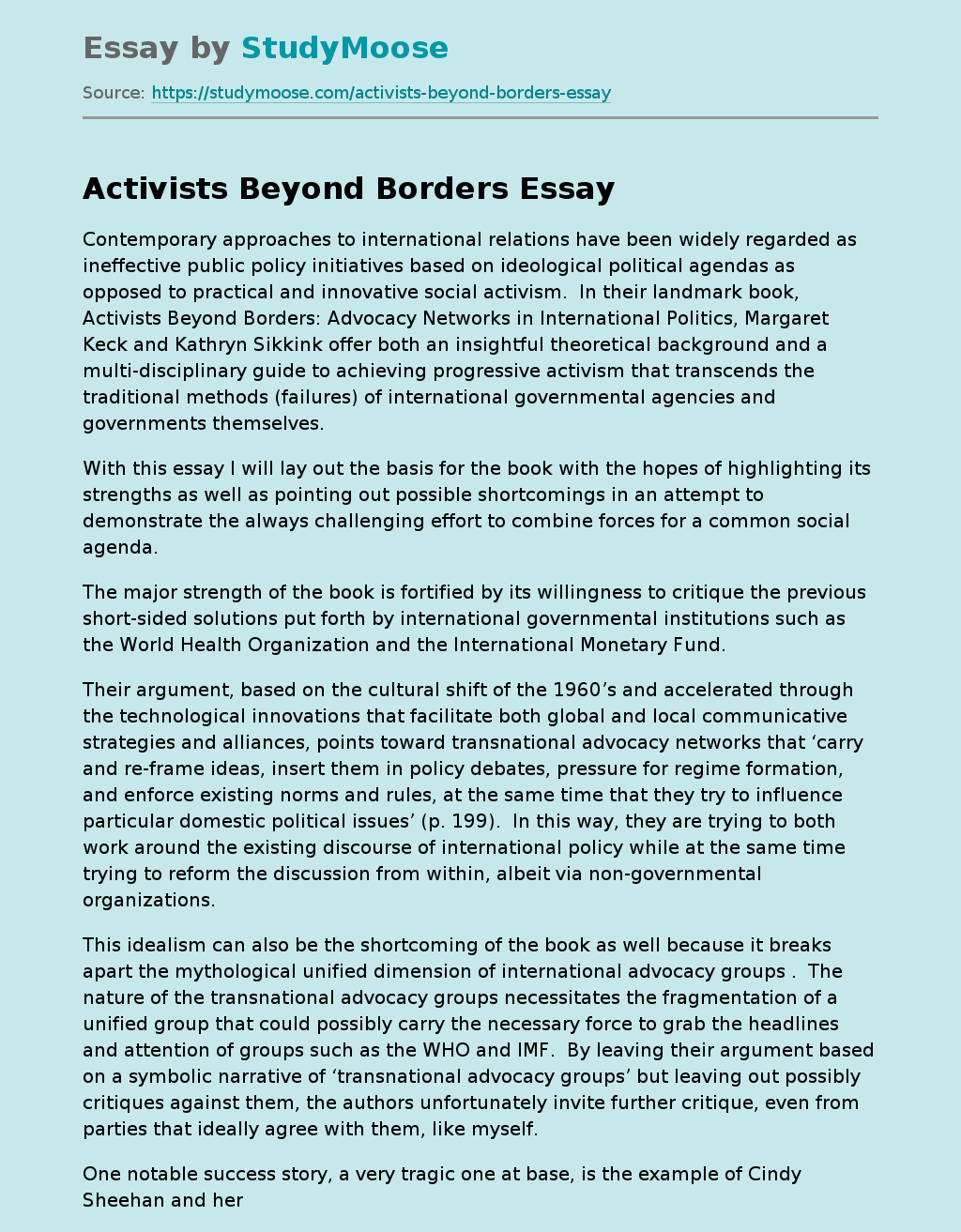