Acquisition of Prejudice as Social Issue

The word ‘prejudice’ comes from the Latin word pre-judicium, which means ‘pre-judgment’. Without examining a person on his or her own worth, one has already adopted a negative attitude that implies a judgment. A prejudice is a mixture of beliefs and feelings that predisposes people to respond positively or negatively to members of a particular group. Prejudice is defined as a positive or negative attitude based on information or knowledge that is either irrational, unrelated to reality, or a distortion of fact, and that is discriminatorily generalized to all the members of a group.

Turn in your highest-quality paper
Get a qualified writer to help you with
“ Acquisition of Prejudice as Social Issue ”
Get high-quality paper
NEW! AI matching with writer

As with other attitudes, prejudice can be thought of as consisting of three components: classical conditioning, operant conditioning, and cognitive-social learning.

The evidence that supports this idea is from the Clark study in the 1930’s. This study showed that children (Caucasian and African American) both preferred a ‘white’ doll and proclaimed the ‘black’ doll to be bad. This response is learned because for some reason white is looked upon as superior and black is a color that symbolizes immorality.

Although this study was conducted many years ago, a follow-up study in the 1980’s proved that the majority of children still preferred the white doll.

Most classical conditioning can be spotted during childhood because many children will learn to respond to stimuli in the same ways as their parents would. Very young children, who have not yet been conditioned, show no preference to either of the dolls. Another possible factor may be that one has had a negative experience with a specific group, making him or her react negatively when the stimulus returns.

Operant conditioning is learning based on consequences. Behaviors are strengthened if followed by reinforcement and diminished if followed by punishment. One may become prejudice if the behavior is reinforced. For example, if demeaning others gains attention and approval from others, it is being reinforced. Reinforcement may be deliberate or accidental. One may also have had a negative experience with a member of a particular group, therefore ‘labeling’ all members of the group the same. Punishment can help weaken this behavior, but it is hard to administer it consistently and immediately in order to be effective. Inconsistent punishment will increase the likelihood of this behavior to occur more often.

Cognitive-social learning is a theory of learning that emphasizes the role of thought and social learning in behavior. In addition to what we learn from family, friends, and group memberships, the media also contributes to the negative behaviors thought about specific groups of individuals. When people, especially children, see prejudice around them in everyday life, they seem to think it is normal to treat others in the same way. This constant exposure of prejudice reinforces the idea that these behaviors come naturally.

Although prejudice is not as common as it was before, it can still be found against many groups that propose originality or simply, something different. If society can find a way to prevent the reinforcement of these behaviors, it can help to eliminate prejudice against any group, whether they are of different race, sexual orientation, or beliefs.

Acquisition of Prejudice as Social Issue. (2016, Jul 01). Retrieved from https://studymoose.com/acquisition-of-prejudice-as-social-issue-essay 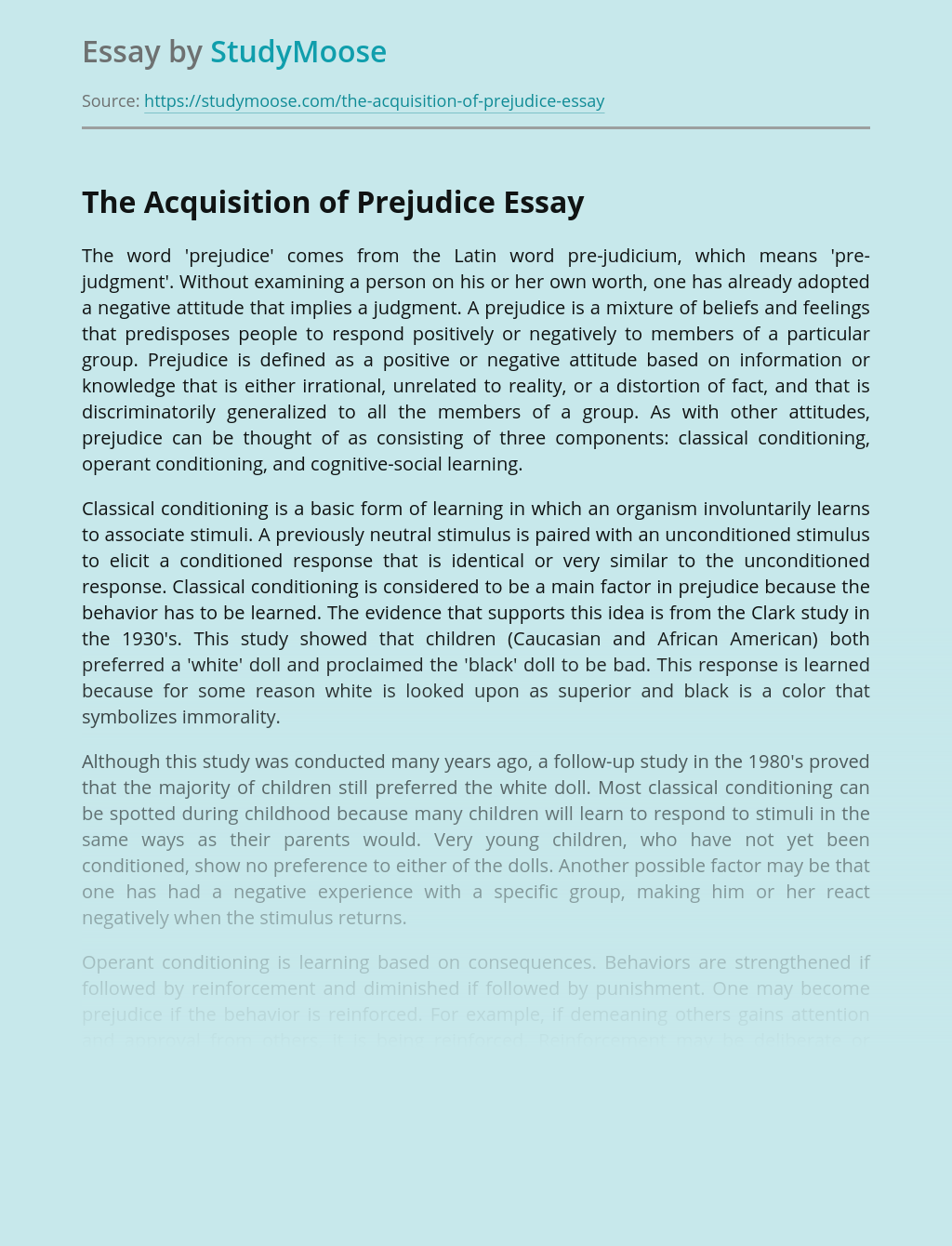 Turn in your highest-quality paper
Get a qualified writer to help you with
“ Acquisition of Prejudice as Social Issue ”
Get high-quality paper
Helping students since 2015
Stay Safe, Stay Original