What is Global Poverty?

Through my essay I will talk about what global poverty is, why it is an issue and solutions to solve it. Global Poverty is seen as more than just statistics about economies, hunger, and homelessness. Poverty is a way of life, which is affecting most of the people in the world. Poverty is the physical state of being extremely poor. Poverty is based on income levels and access to basic human needs such as food, water, and shelter.

Don't use plagiarized sources. Get your custom essay on
“ Eradication of poverty ”
Get custom paper
NEW! smart matching with writer

Poverty affects physical health as well. The world’s poorest countries continue to show the lowest life expectancies when compared to super countries such as the US and Europe. Poverty can be a controversial subject in modern society, as people have different understandings of what it means to be poor and what solutions to poverty should look like.

Global poverty is caused by many subjects that affect the economy. Examples include lack of clean water and food, conflict and poor education.

The lack of food and water causes people to lose energy and strength needed to work. This can also leave people vulnerable to diseases. Once started, diseases can spread and possibly cause the death ratio to rise. Conflict can cause global poverty in many ways. One example is that violence can destroy structures and force people to leave for safety reasons. People resort to violence after conditions do not change. Poor education plays a major role in global poverty. Most of the time, kids who should be in school are pulled out and forced to work.

This happens because their families need them to work or because they can’t afford to send them to school. Because kids are deprived of a good education, most likely they won’t be able to achieve their maximum potential.

By properly identifying issues, the combined efforts of the local, state and national government poverty will lessen. By allocating proper time and resources, plans are set in motion to decrease poverty. Creating organizations and communities to work locally directly help those in need. It focuses its energy on specific individuals who need help rather than everyone. Creating jobs gives people in poverty communities a way to build themselves out. This idea is known as the most effective way to rid poverty. Raising the minimum wage also fights inflation.

By providing access to healthcare, families would be allowed to allocate the money they would normally spend on healthcare elsewhere. In more and more countries, women empowerment is on the rise. By allowing women to work, it allows them to take leadership roles and grow socially and economically.

Microfinancing provides improvements by providing access to larger loans and better repayment rates for women, as they are less likely to default on their loans than men and college education for loan-payers’ children. It can also improve health and welfare by providing access to clean water and better sanitation, creating new jobs and teaching developing countries to be more sustainable.

The Global Issue of Poverty

As an individual, raising one’s awareness on the causes of poverty and its manifestations is the first step in the effort to help reduce poverty. The knowledge that change can not be effected through individual efforts but through collective endeavors will motivate one to join organizations and initiatives that aim to mitigate specific poverty issues (www. marininstitute. org, 2006). However, we should not be chauvinistic enough to treat the poor as if they do not have the capacity to realize change for themselves.

Our role should be as a catalyst for change and with a faith in the innate ability of the poor to work together to alleviate their economic and political conditions. We should in turn build the awareness of the poor about their situation, educate them in the knowledge, skills and attitudes required for them to lead and work for themselves, organize them around common goals, mobilize them for concrete actions and help them evaluate their experiences and learn from them. On the other hand, society can eradicate poverty by assessing the economic, political and cultural systems that perpetuate it and implementing necessary reforms.

Social class plays a role in marginalizing people while others acquire so much more then they can spend or use. The political power associated with economic status is another aspect. As long as the wealthy hold the major decision-making positions in government and exclude the sector of the poort, situations of poverty will continue. A culture that accepts poverty as the status quo is another area for change. Educational institutions, the church and the media should work to expose social realities from the perspectives of the poor. Inequality and injustice should not be made to be tolerated as the norm.

At the same time, society should not only look at the plight of its citizens but also on how its foreign policies affect other nations. Trade relationships should be based on mutual benefit and mutual consent on the rules governing the relationship. Imposition of trade policies for the benefit of developed countries only will not do any good in equalizing the first-world and third-world gap (Irogbe, 2005). Lastly, more powerful countries should recognize the right of other nations to chart their own destinies instead of intervening through covert ways or through waging war against those countries.

The International Day for the Eradication of Poverty is celebrated every year on October 17 throughout the world. It was officially recognised by the United Nations . It is to honour the victims of poverty, hunger, violence and fear. One of the main aims of the day is to make the voice of the poor heard and Raising awareness of the need to eradicate poverty.

Poverty is the state of one who lacks a certain amount of material possessions or money. That is, they have little or no material means of surviving—little or no food, shelter, clothes, healthcare, education, and other physical means of living and improving one’s life Poverty reduction is a major goal and issue for many international organizations such as the United Nations and the World Bank. The World Bank estimated 1.29 billion people were living in absolute poverty in 2008. Of these, about 400 million people in absolute poverty lived in India and 173 million people in China.

Poverty has been a serious problem over centuries. Every year, there are millions of people at the risk of hunger. we have to fight corruption. This is one of the great sources of poverty. A country with a lot of corruption will grow slower than others, and eventually, the economic activities will decline.

The principal cause of why poverty exists is because of this simple fact. The Earth, on an environmental and economic standpoint, cannot satisfy every single human being’s wish, desire and demand when it comes to the consumption of goods and services because of scarce natural resources. This harsh reality will always be present within an economically driven society given the exploitation of natural resources and the constant pursuit of economic growth. the problem lies in the distribution of this consumption where extremely few people consume almost 70% to 80% of these resources while large numbers of people consume just under 20% of the same resources.

poverty results in the lack of resources. poor students do not have the opportunity to study in good schools, get good coaching, study good books. poverty also leads to crime. when one is unable to earn money from fair mean, they turn to become thieves, robbers, pockpocketers, even terrorist..
poverty also leads to overpopulation which is itself one of the big challenges faced by us. people think that by having more children, they will have more earning hands. thus, leading to increased population of the country. to set all things in order, it is necessary to remove poverty.(ERADICATION OF POVERTY)

In order to prevent poverty, the causes that create poverty itself have to be recognized and fixed.

Poverty cannot be removed overnight. it is a long job. it can be wiped step by step. Educational facilities should be provided to all the poor families so that their outlook/ way of seeing things is broadened. the exploitation of poor should be stopped. the programs/money issued by the government should be provided to the poor in full.

Then and then only can poverty be removed.

Eradication of poverty. (2016, May 21). Retrieved from https://studymoose.com/eradication-of-poverty-essay 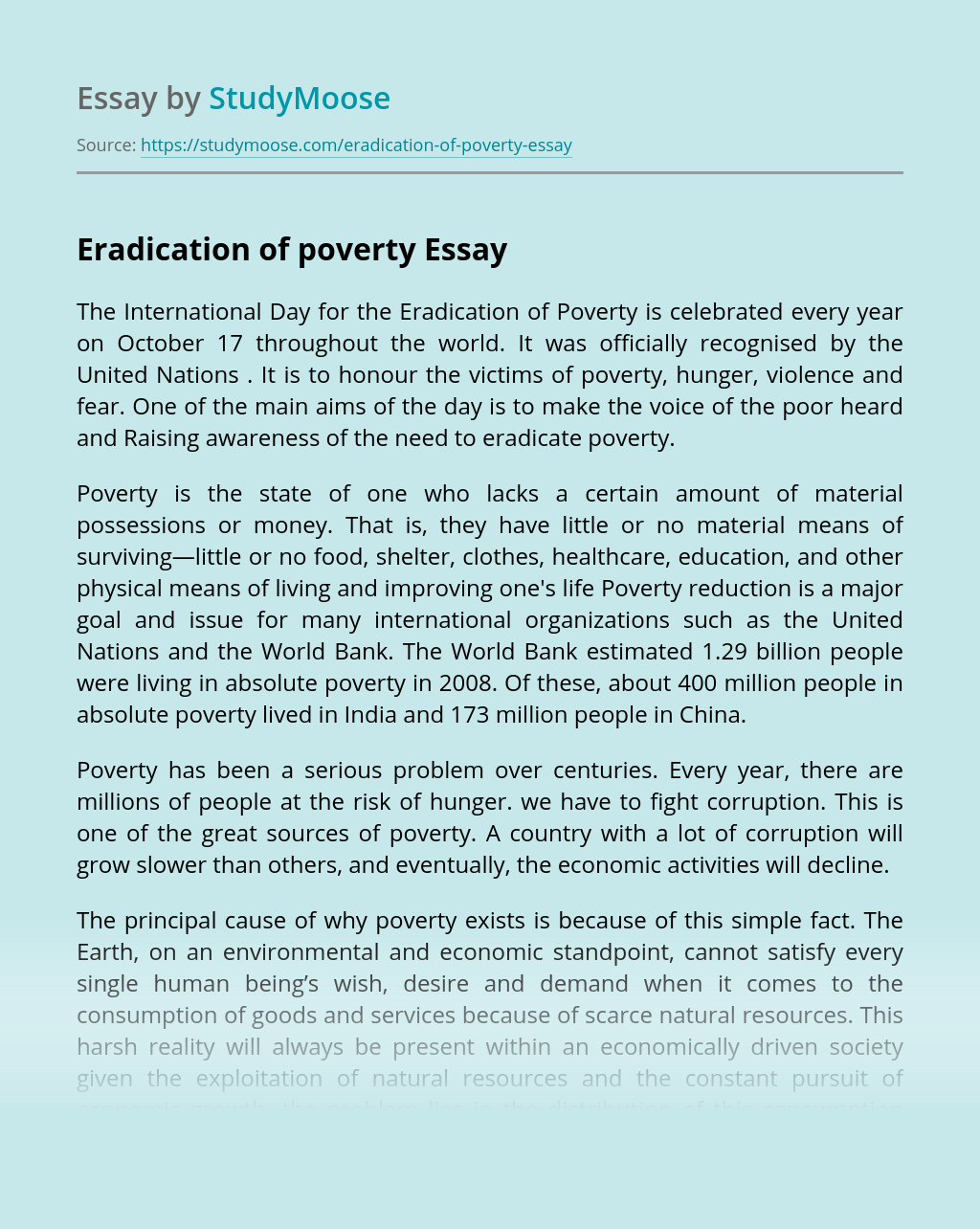