In “Black Men and Public Space,” Brent Staples makes the most interesting idea that, people look – always – to black men as a threat, they see every dark skinned youth as an incoming danger, and that is what Staples implies in his essay. He also explains when he was young, people looked at him as a mugger or, a rapist or even worse. So, throughout his essay we can see Staples’ realization of the fact that, people – rarely – change their prospective about black guys.

Don't use plagiarized sources. Get your custom essay on
“ Analytical of Brent Staples ”
Get custom paper
NEW! smart matching with writer

He is trying to bring discrimination problem into the spot light, a problem that should have disappeared hundreds of years ago. This problem still irritating the peace of this community and to find reasonable solutions for it, he is trying to make people sympathize with his cause by making them live his life in his own words. The literary elements Staples used played an important role to grab reader’s attention and feel his pain, and the problems he went through.

His realization that he should deal with community with more understanding, and that appeared in his language and word choice along with the sarcastic tones, irony, and metaphors.

At the beginning, Staples tries to visualize the first impact with the night walkers, he started with “my first victim” which is a sarcastic and yet very sad tone, because it carries in it a deep meaning of how people see him (188). The language indicates a good sense of understanding people around him, a sense of understanding in which he mentions specifically the distance between him and his “first victim” as “menacingly close” from her prospective even if it was from “discreet, inflammatory distance” in his prospective which, implicates a good understanding of the situation (188), even though the distant between the two of them was quite far his “first victim” considered dangerously close.

Staples continues to analyze the situation that happened a “decade ago” with more understanding. He explains why he felt bad when he was “a graduate student newly arrived at the University of Chicago” (188). He was able to change the surroundings, in a bad way, through only his presence among people as he looked “undistinguishable from muggers” (189). His tone is carrying a lot of sadness because his look may affect the reaction of others in a way that may have been hurting him. Staples also uses metaphors like “public space” to indicate the huge effect on the people around him (188), and “accomplice in tyranny” indicates irony because he never participated in such an action. On the contrary, people who treated him badly may have done it. “When fear and weapons meet” is another metaphor, and implies the danger of looking like a mugger for the people around you, and also sounds scary and dangerous.

Staples also mentioned how he was helpless when people closed their door lock fearing him, he mentioned the sound which this act produces “thunk, thunk, thunk , thunk”. (189) He states how they are “hammering down” the door lock every time he is passing the stopped cars at night, which sounds horrifying not for them but for staples and this is a kind of irony because they are scared from him but their reaction scared him(189). Than staples mentions how when he moved to New York, the same stereotype remained and people also treated him the same when he used to walk at night, he describes the streets of Manhattan as “narrow and tightly spaced” and its buildings to “shut out the sky,” which is a symbolism that pictures the buildings as a barrier which close the sky (189).

The situation could have been catastrophic for him when he passes people because they may fear the “worst of him” and take action according to that assumption and this could be fatal (189). Also, he mentions how people always “fear the worst of him” which is irony because the real fear comes from them as they may react violently thinking that they are protecting themselves not the opposite (189). Also, he mentioned how people “set their faces on neutral” when they see him this is another symbolism staples use to describe the reaction of people when they saw him, how uncomfortable they are around him. But, beside his sadness, Staples has a sense of understanding why people would do such a thing why they got scared when they see him, and that was clear when he said, “I understand, of course, that the danger they perceive is not a hallucination” (189), which is an obvious tone of understanding. Staples also uses words like “alienation” which indicates his sadness and isolation because, it is his land but, feels as a stranger (189).

Staples then explains that he is not a stranger from “Chester, Pennsylvak” and explains why he would never think like a mugger, or a rapist. He is saying that he “grew up like one of the good boys” which carries a lot of irony because, people thought that he is a bad person, but he was really one of good boys (189). He continues explaining why he grew up a good boy, how he buried his friends who really died young or as he said “they were babies” which is a metaphor that gives us a good idea of how those kids wasted their lives for nothing and died very young. That led Staples to be “a shadow”, a whose presence creates fear in people, and that is another irony because, how could the people get scared from such a nice guy?

This nice guy is always misunderstood by people, always has been treated badly over the years. He mentioned how he could not prove who he is when he had a story to write and he is saying, “I had no way of proving who I was”, and the tone here is weakness, sadness, and bitty (190). He also mentions his experience in jewelry store, and how the lady back then thought He is a thief or something, and she got the dog “an enormous Doberman” (190), and that brings a picture to one’s mind about the dark ages when slavery took place, widely, all over The United States it shows the brutality, and discrimination that happens against African American youth as he mentions how “such episodes are not common. Black men trade tales like this all the time” (190).

Staples mentions also that it is not only him who had been subjected to such discrimination but also several black guys who keep telling their stories as staples said, “black men trade tales like this all the time” (190) and that emphasizes the fact that this is a kind of discrimination against a group of people, in this case “the black men”. So to deal with that, staples “now take precautions” although it sounds as irony because, he is the victim of the community and yet he has to take precautions, and “make himself less threatening”? (190)

Staples succeeded to grab people’s attention to his cause by showing his experiences and pain through several literary elements especially irony, metaphors and word choice, and that made the reader more sympathetic and understanding of his point of view and his situation. Staples also succeeded to bring this discrimination issue to the surface, and trying to find a solution for it, even if this solution was changing himself 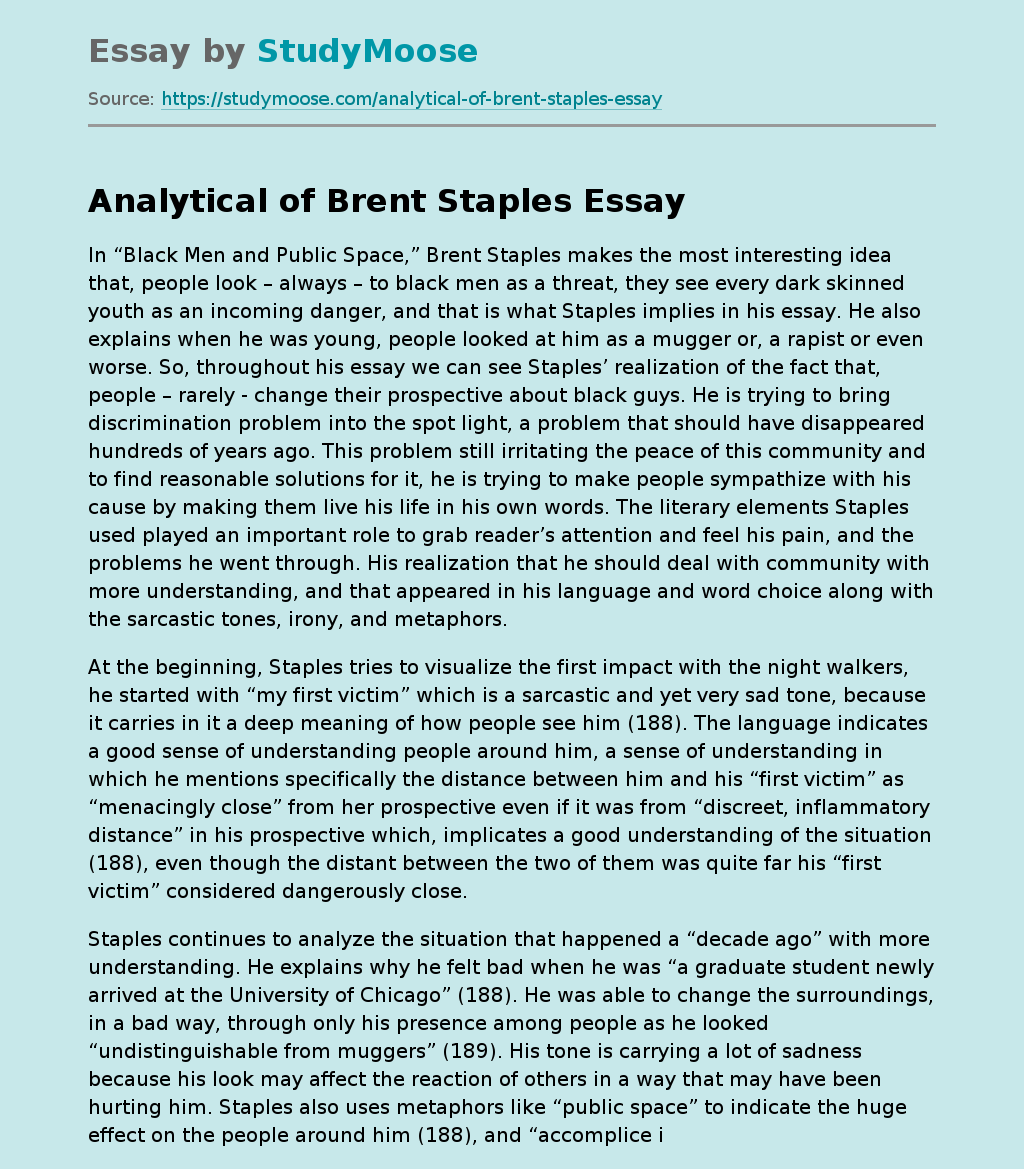