The presence of black men is the harbinger of black stereotypes and severe racial discrimination. This issue has caused trouble throughout history, regardless of what period it once again arose to a hotly debated public issue before being pushed aside provisionally. However, one must not blame such an unfortunate population for the troubles that have occurred.

! Brent Staples, the author of Black Men in Public Space, utilizes a variety of strategies in his work to best develop his ideas. In his work, Staples uses not only consistent diction and language that set the atmosphere to best present his ideas to the readerto create a queer yet thrilling contrast between his relatively casual writing style and the critical issue he is dealing with, but also the ﬁrst three abbreviations of the PELIDS writing style, pathos, ethos, and logos, in order to solidify the relationship between his ideas in the writing and the reader with empathy and credence.

Don't use plagiarized sources. Get your custom essay on
“ Summary Black Men and Public Space ”
Get custom paper
NEW! smart matching with writer

Additionally, Staples brilliantly implies and thus emphasizes the main idea upon which the solar system of ideas and details presented in his writing revolves around, a truth that the reader expects prior to ﬁnishing the work, and yet still retains its signiﬁcance as a breathtaking realization – The public is blind to injustices that black people endure as an everyday part of their lives.

Throughout the whole of Black Men in Public Space, Staples generates an intriguing atmosphere that is not captivating in the sense that it incorporates copious amounts of such unnecessary things as action, but is enticing due to its informality and serenity even whilst discussing sensitive issues.

The writing is engulfed in a casual atmosphere, which is ironic when considering the tone is directly juxtaposed with information considering racial segregation. This method can be identiﬁed as black humor. It is not the common tone that is expected especially when the author himself is the protagonist in a story concerning frequent life-threatening experiences, thus subverting thereader’s expectations.

An example of this critical contrast between a serious issue and the casual tone applied by the author is the tone by which Brent Staples recalls past, personal experiences with racism. He ﬁrst lays out a laundry list of disturbing events that occurred throughout his life, then he describes these events as trivial due to their frequent occurrences, and leaves it at that. By using black humor, Staples is able to maintain this atmosphere of serenity and simultaneously present shocking evidence of racial segregation.

Supplementing the casual, yet personal atmosphere established by the author’s careful use of diction and language, Staples uses pathos, ethos, and logos. Through the use of ethos, Staples establishes the credibility of his writing as that of an intelligible, graduate student of the University of Chicago. Thus, Staples solidiﬁes his ideas that are presented as legitimate concerns, and not the words of an uneducated black man who banters on about the unfairness of racism.

He backs up his claim with sufﬁcient evidence by utilizing logos towards the end of the story when he announces his variation of the cowbell that hikers wear in bear country, which in this case would translate the cowbell to Vivaldi’s “Four Seasons” and the bears to racially discriminant white people of society. He wraps all of this in a controlled manner, a use of pathos, which (he explains) originates from his numerous encounters with such prejudiced events over the past few years, thereby creating an eruption of empathy from the reader, and thus a better development of the ideas present in the writing.

Underlying all of the previously mentioned strategies of writing that Staples incorporates to best develop his ideas in his writing, is the most signiﬁcant portion of the writing – the main idea. Staples implies throughout his whole writing an exempliﬁcation of syllogism. 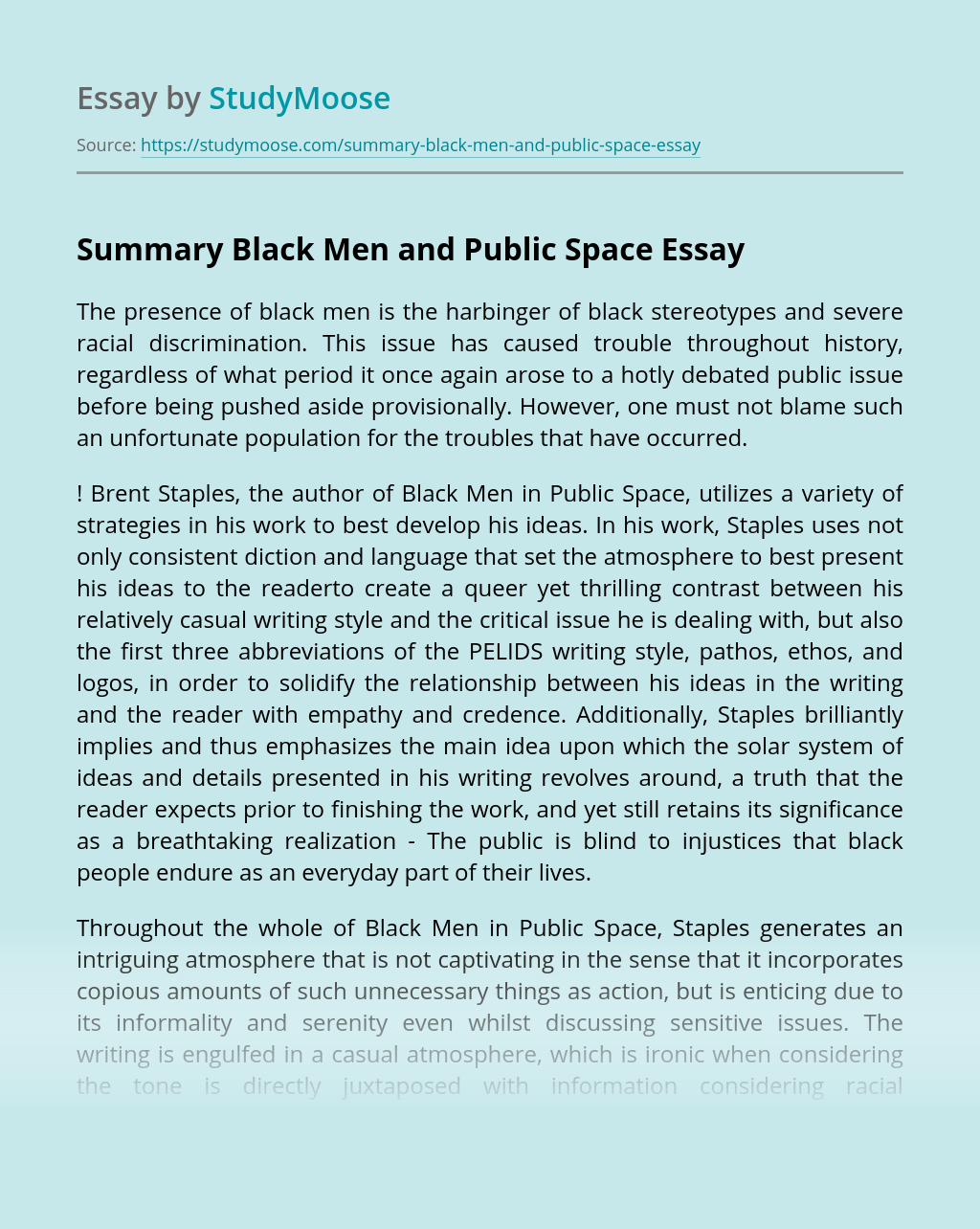