Global Warming is the rise in the average temperature of Earth’s atmosphere and oceans since the late 19th century and its projected continuation. Many people do not see this as a problem. However, it is currently a huge issue that is often talked about among scientists and many other people. Global Warming is caused by many different things. Greenhouse gases, deforestation, and solar activity are three different proven facts that cause global warming. Global warming is not something that is going to disappear; it is only going to get worse if people do not start doing something about it.

Don't use plagiarized sources. Get your custom essay on
“ Global Warming: Causes, Effects, and Solutions ”
Get custom paper
NEW! smart matching with writer

There is a significant amount of negative effects for the environment and for human life due to global warming. Global warming affects each and every one of us. We should all be concerned with what is happening to our planet.

The main cause of global warming is the burning of greenhouse gases. Some of the main gases are: carbon dioxide, methane, nitrous oxide, and the loss of forests.

Most of the harmful gasses are emitted by humans through the combustion of fossil fuels in cars, factories, and electricity production. But why and how do these specific gases cause global warming, it is because all of these gases have very different heat-trapping abilities. A molecule of methane produces more than 20 times the warming of a molecule of CO2. Nitrous oxide is 300 times more powerful than CO2.

Other gases, such as chlorofluorocarbons (which have been banned in much of the world because they also degrade the ozone layer), have heat-trapping potential thousands of times greater than CO2.

But because their concentrations are much lower than CO2, none of these gases adds as much warmth to the atmosphere as CO2 does. Trees provide an important ecosystem function by storing carbon, a cause of climate change, in their biomass. Currently the world’s forests store 283 billion tons of carbon in their biomass. Half the world’s tropical forests have been cleared or degraded.

Every hour, at least 4,500 acres of forest fall to chain saws, machetes, flames, or bulldozers. In 2012 three million hectares of mature forests were cut down. This is a causing effect to global warming and continues to rise every year. Something called solar activity is also reasoning behind global warming. Solar activity is simply the amount of heat that comes off of the sun. Scientists can tell that solar activity contributes to global warming because there have been recent changes in temperatures at different levels in the Earth’s atmosphere.

There are models showing how the greenhouse effect is warming the lower part of the atmosphere (known as the troposphere) but cooling the upper atmosphere (known as the stratosphere). However, if the sun was responsible for the observed warming, warming of both the troposphere and stratosphere would be expected. Global warming also has countless numbers of effects in the environment. It has been proven that the increase in Earth’s average temperatures have already been causing tons of ice to melt worldwide, also causing sea levels to increase over time. It is also causing precipitation to increase worldwide on average.

Global warming is an extremely severe problem facing the world today. Its effects and causes have been on the rise and people need to do something about it before the problem gets any worse. There are several ways to reduce the effects of global warming. The first way is you can choose vegetarian meals. Choosing vegetarian foods can be drastically reduces agricultural water consumption and land use, and favorably impacts biodiversity. Vegetarian diets also have been shown to promote good health and in most developed countries, eliminating meat from one’s diet is as easy as making responsible choices at stores and restaurants.

If one eats meat it should always be from a local source. It is better, if you eat what you have planted. You can lessen your negative global warming impacts by eating food that is grown in your area, instead of choosing foods that have been shipped halfway around the world. It is because, food transportation is a major cause of air pollution and greenhouse gas emissions. So, using foods which require less transportation helps the environment and at the same time reduce global warming problem.

So, the choosing to make the decision to reduce the global warming effects is in your hand. Last but not least, you can also use public transportation. Taking the bus, the train, the subway or other forms of public transportation lessens the load on the roads and reduces one’s individual greenhouse gas emissions by an average of 1600 pounds per year. Taking public transport also removes the stress of long road commutes and gives you a great opportunity to read, think, and relax.

You also save on parking money and time wasted looking for parking spaces you can also have car-pooling with your officemates or neighbours. If you can’t live without a car, then use it in a way that minimizes global impact. You can also make a good choice by buying a hybrid car. ‘ The average driver could save 16,000 lbs. of carbon dioxide and a lot total of money by driving a hybrid. Moreover, plug-in hybrids can save even more and one day may be able to give cash back. You can also pretend to buy a fuel efficient car.

I think, all people in the world can take these simple ways in their daily lives. Although it is very difficult to reverse once the process is started, global warming has to be stopped if we want to live like we are now. If it is not controlled, problems such as the drastic rise of sea levels, increasing of temperature rapidly, melting of glacier and along with others, will definitely disrupt our living patterns. So, let us not put our finger to others, but we must start from ourselves and take the ways to reduce the effects of global warming. 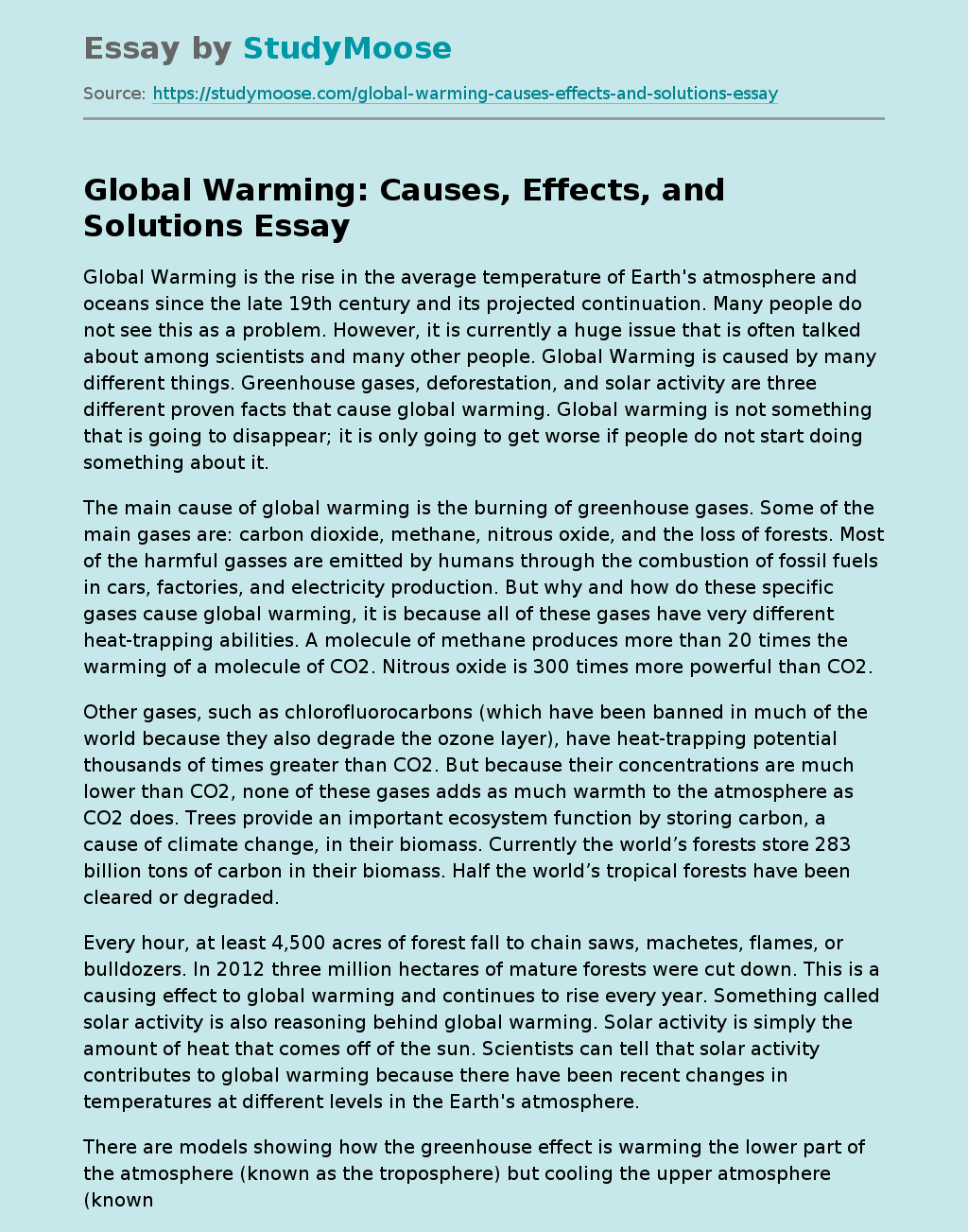