The Effects of Amnesia

Amnesia is defined as the full or partial loss of memory that may be temporary or permanent, causing a significant inability to remember important information to such a degree that it has moderate to severe effects on person’s life (Logsdon). The effects of amnesia are related to the type of amnesia patient is suffering. The most common effect is the inability to recall information stored in the long-term memory. There are some cases that patient is able to recall past memories, but he is unable to create new memories, or even, unable to do both recall past memories and create new ones (Nordqvist, 2009).

Don't use plagiarized sources. Get your custom essay on
“ The Effects of Amnesia ”
Get custom paper
NEW! smart matching with writer

There are many factors that origin amnesia, which are classified in organic and functional. The organic factors are related to injuries in the brain, and loss of brain cells in the frontal, parietal, and temporal lobes. A cause of brain injury is when it is occurred in car accidents. The degree of memory loss usually is proportional to the severity of damage in the brain.

In most cases, amnesia is not severe and the recovery is short-lasting (Nordqvist, 2009). An organic factor of brain injuries is the brain has suffered a virus infection such as encephalitis (inflammation), which the brain tissue is affected by a mistaken attack of the immune system, or an insufficient supply of oxygen to the brain due to a heart attack, respiratory distress, or carbon monoxide poisoning (Nordqvist, 2009). Another factor of brain injury is the abuse of alcohol and drugs, such as sleeping and depressive pills, by a prolonged time, causing memory loss (Crystal, 2010).

The functional factors are related to emotional shocks caused by being the victim of a violent crime, child or sexual abuse, or being involved in a combat, natural disaster, or a terrorist attack (Nordqvist, 2009).

Amnesia is presented in many types depending on the outcomes occurred to the affected person, or any traumatic event he or she is affected. The following three types of amnesia are related to the effects in the person’s memory and the capability to recall information.

Retrograde amnesia is the most common type presented in hospitals, television shows, and movies. This is caused by damage in the temporal lobes and especially the hippocampus (Ellis-Christensen, 2010). Patients with retrograde amnesia are unable to recall memories from the past occurred before it is presented, but the ability to form new memories and recall after the start of amnesia is not affected (Wall, 2006).

Anterograde amnesia is the reverse-side of retrograde amnesia. This is caused by the damage to the hippocampus or surrounding cortices, disabling memory formation, and often it is permanent if the brain is damaged (Liden, 2010). Patients with anterograde amnesia are unable to form new memories from the point when it is presented and to recall memories recently formed because information is not moved to the long-term memory. However, patients may be able to learn new skills without being taught again because the declarative memory is impaired while the procedural memory continues to function (Liden, 2010). Although anterograde amnesia is permanent when brain damage is presented, scientists actually are studying ways to apply neural plasticity, the capability of nerves to form new ways to recover lost functionality, to perform treatments for this and other diseases caused by brain injury (Liden, 2010).

Transient global amnesia is a temporary total loss of memory and the patient affected is unable to recall any information restored in memory. The causes of this disease are uncertain, but some hypotheses establish it could be caused by a reduced blood flow, a traumatic event, stress, or an atypical type of migraine. This disease tends to reverse itself over time, but the temporary blackout can last for 24 hours or more (Wall, 2006).

The following types of amnesia are related to disturbing events, or abuse of alcohol and drugs. Traumatic amnesia is caused by a hard blow to the head as a result of a car accident. The person affected may experience a brief loss of consciousness, or even go into a coma. The majority of cases are temporary and it lasts depending of the severity of the injury. Childhood, or infantile, amnesia occurs when the person is unable to recall events from early childhood. The causes could be that this may be associated with language developments, or the possibilities of some areas of the brain were not fully mature during childhood. Wernike-Korsakoff’s amnesia is caused by excessive abuse of alcohol, or by malnutrition linked to thiamin deficiency. Patients with this disease have poor coordination and loss of feeling in the fingers and toes (Nordqvist, 2009).

To diagnose amnesia in a patient, a doctor will do an evaluation to discard other possible causes of memory loss, such as dementia, depression, a brain tumor, or Alzheimer’s disease. First, the doctor starts the evaluation with a detailed medical history, including the type of memory loss, when the problems started and how they progressed, factors that started amnesia, such as a head injury or a traumatic event, family history especially of neurological disease, use of medication or alcohol and drugs, history of seizures, headaches, depression or cancer, and other symptoms (language problems, personality changes, or impaired abilities) (“Test and diagnosis,” 2009). Next, doctor will do a physical examination, including a neurological exam to check reflexes, sensory function, balance, or the physiological aspects of the brain and the nervous system (“Test and diagnosis,” 2009). Then, doctor will do a cognitive exam, testing patient’s thinking, judgment, short- and long-term memory. Finally, doctor will verify any internal damage of the brain through MRI, CT scans, and electroencephalogram (Nordqvist, 2009).

So far, there is not any medication or drug for the restoration of memory for patients with amnesia. Fortunately in the majority of cases, amnesia is resolved itself without any treatment. However, if an essential physical or mental disorder is present, a treatment must be developed. Occupational therapist may help patients to learn new information to replace what was lost, or using the existing memories to create new ones (“Treatments and drugs,” 2009). Reality orientation aids may help patients to remember if he is surrounded with familiar objects, photographs, smells, and music. If patients are suffering the Wernike-Korsakoff’s amnesia, an adequate nutrition can help. Whole grain cereals, legumes, nuts, lean pork, and yeast are rich sources of thiamin (Nordqvist, 2009).

Amnesia is a disease that commonly means partial or total memory loss and/or the ability to store new memories. Sources of amnesia can be organic, such as brain injury caused by an accident, infection to brain cells, oxygen deprivation, or abuse of alcohol and drugs; and functional, such as traumatic events or effects of stress. Amnesia can be classified depending on the factors how this is presented, such as Wernike-Korsakoff’s, traumatic, or infantile amnesia; and on the effects in the functionality of the brain, such as retrograde, anterograde, or transient global amnesia.

The diagnosis of amnesia in a patient depends on a detailed medical history in order to discard other types of disease, physical and cognitive exams, and a verification of the brain if an injury is present. Amnesia is reversible by itself, but if physical or mental damage is presented, treatments like replacement of memories, reality orientation aids, or a healthy nutrition for Wernike-Korsakoff disease can be helpful solution to resolve amnesia in patients.

The Effects of Amnesia. (2019, Aug 19). Retrieved from http://studymoose.com/the-effects-of-amnesia-essay 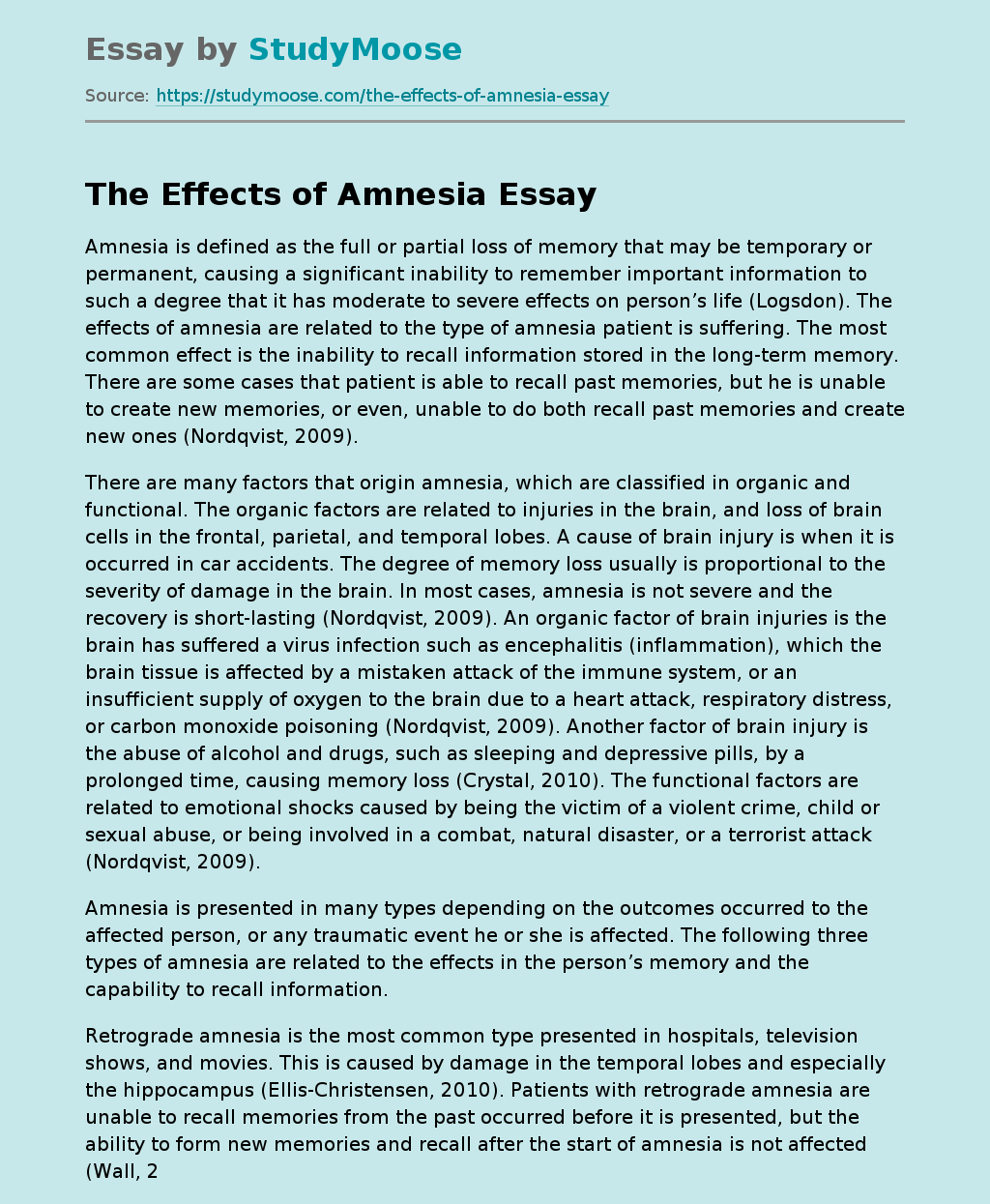