Final Diagnosis, as it might seem, is a novel which is a medical thriller. But it is not completely medical or so to say a novel filled with Operation Rooms, Emergency Rooms or tense doctors. Rather Arthur chooses to talk about Pathologists. Pathologists are the doctors that do all the behind the screen work. They are the ones who do the lab tests, biopsies and autopsies and they are the one who detect the cause of the diseases. Arthur Hailey says that Pathologists are often the people who give the final diagnosis and he is correct.

Don't use plagiarized sources. Get your custom essay on
“ The Final Diagnosis Book Review ”
Get custom paper
NEW! smart matching with writer

Let’s see what the story is all about.

When I started reading the novel there was a comment on the back cover by some newspaper, that The Final Diagnosis is a novel which is the story of a young pathologist who tries to change the standards of a hospital where everything is old and outdated. But when I was through I found out completely false.

I was never able to find out the young pathologist struggling for changes and sure I was frustrated, not at Hailey but at the person who wrote such absurd comment. The Final Diagnosis is a fine novel which is centered on an old hospital named Three Counties. The hospital is an old one, there is lack of funds and staunch need of them also. Money is tight and hospital is not very renowned so there is a trouble in finding able doctors for the hospital but this is some thing that management of hospital has done fine.

The Pathology department of the hospital is in desperate need of money because all the facilities in the department are outdated and old. Even the lab procedures are old and need overhauling. The department head is Dr. Joe Pearson who is a person with 35 years of experience. But he is disapproving of any changes in the department. He says he believes in the old and tested ways and that there are too many changes going these days that if you keep changing every time when will you work!! Now the story tells about the hospital politics and goes in the past of certain other important characters of the hospital. Story also goes in the lives of nurses and interns and residents at the hospital. Story goes deep into lives of some interns and nurses and talks about the romance of a resident and a nurse and finally how unfortunate the nurse had been to have a cancer in the knee at the age of 19 only and have her leg removed by amputation. Now story comes back to the Pathology department and the importance of pathology in the diagnosis and treatment of patients.

I want to say again I am very impressed by the choice of Arthur Hailey, he chose Pathology which is not a much knows field, normal patients seldom know how important pathology is. He could have chosen neurology or cardiology or any thing but he chose pathology. Good. Now there comes a new character in the story John Alexander. He is a lab assistant and his wife is pregnant and being observer by Three Counties hospital. He goes to the hospital obstetrician. He suggests a test because mother is Rh positive in blood group and father is Rh negative. Rh grouping is a part of blood testing other than blood groups. It is about characteristics of blood  as explained in the novel. However, the standard procedure of this test requires three stages. Two of them are done in Three Counties but the third one which happens to be the most important of pregnant ladies is absent. When John asks Dr. Pearson he is not happy and refuses to grant money to purchase rabbit serum to do the necessary test.

Now comes a new character and the young pathologist I was waiting for ? Dr. Coleman. He is a young and brilliant pathologist who is just 31 years of age and has a record that can make any one envy. Coleman is a person who is intellectually superior than most of his colleagues. It just happens that John is from the same town as Dr. Coleman. Now Dr. Coleman is assistant head of Pathology department or assistant of Dr. Pearson. But Joe is a man who not likes assistants working under him because he doesn?t wants to decentralize his authority. Dr. Coleman orders the much required rabbit serum for the tests and Pearson is not very happy about it. He cancels the order. Now starts the tug of war between young and enthusiastic Coleman and old and experienced Pearson. But in the mean time the tests about that Rh thing are done and without rabbit serum. Now the Mrs. John Alexander gives birth to a child that is 8 week premature.

I was horrified even to read that because my cousin sister gave birth to a child 4 weeks premature. The baby was so small. What would have been look of a child 2 months premature!! Good God!! The child eventually dies and it is so discovered that if that rabbit serum or as the medical term was  the cocoon serum test would have been done the child could have been saved by blood transfusion at the time of birth. Now it was impossible. There comes up another problem in the mean time. The catering department of the hospital says that there are problems in dish washer of the café. Then some one tells that there are typhoid cases in the hospital. Management is horrified at the idea of having an epidemic in the hospital. They order stool culture tests of all the employees of the hospital.

The tests would have been done by pathology department long ago but they never did the routine checkup for six months and now there is a danger of epidemic. Dr. Pearson agrees for the tests of all 95 employees. They find the typhoid carrier who is taken into observation quickly. Finally Dr. Pearson gives is resignation and Dr. Coleman becomes the in charge of the Pathology department. The dialogue between young Coleman and old and experienced Pearson in the end when Dr. Pearson is clearing the desk is simply great. You can simply envision the dialogue.

The kind of things that Dr. Pearson says to Dr. Coleman as advice from an experienced retiring colleague are just great. It tells us that how much is the importance of experience but with experience you start to grow old. Any person who starts as young and supporter of change eventually grows into a person who is cold and disapproving of change. Dr. Pearson then talks about the reasons why such things happen and advices Dr. Coleman to avoid such things. That is the essence of the story. Change in a place where there are reluctant people who don’t want the change even when it is extremely necessary and for the benefit of the sick and the weak. 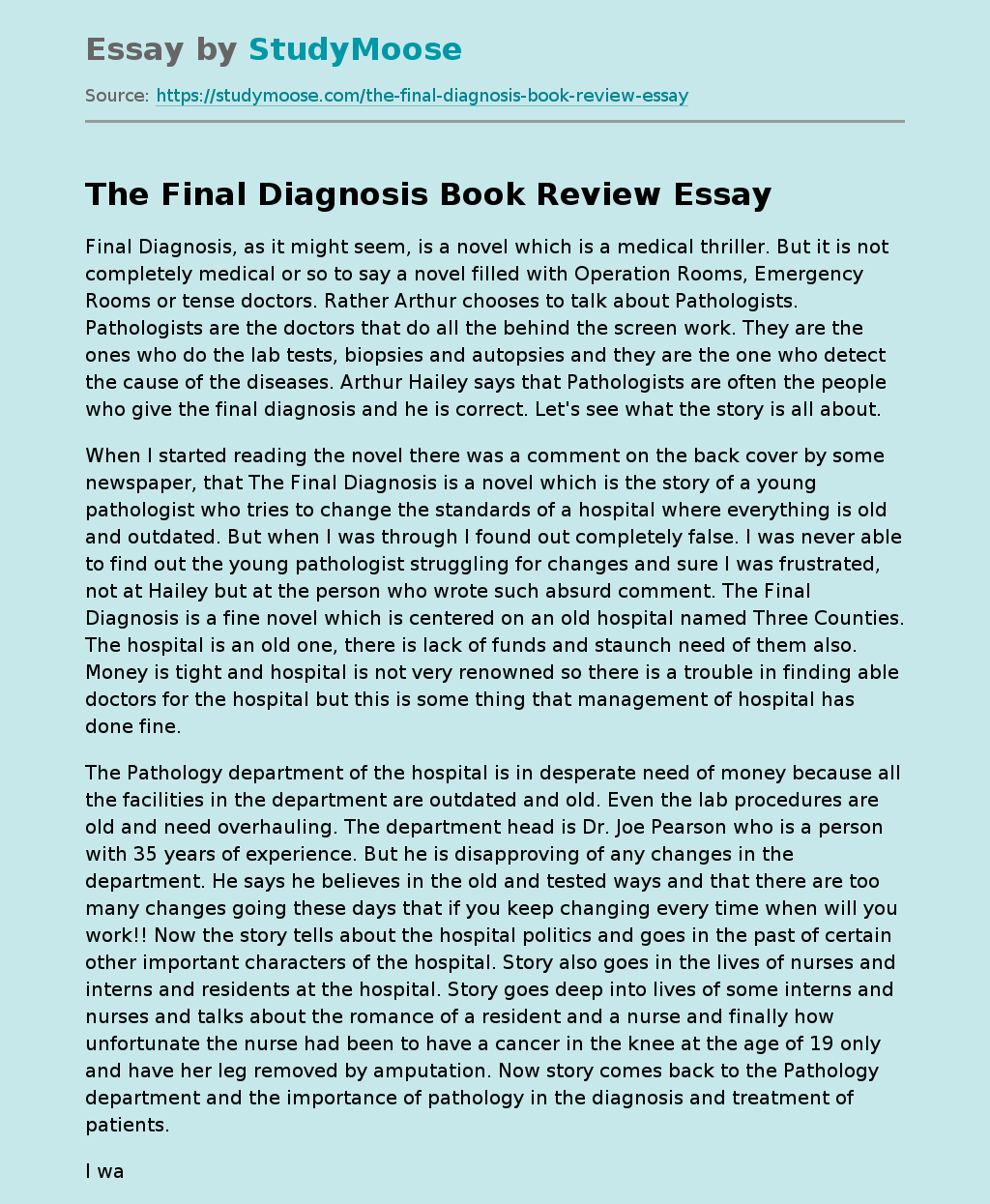