William Wilberforce’s greatest and most important political achievement was his long but successful fight to end Britain’s involvement in the slave trade. He used his position as a spokesperson for the abolition movement and was the first member or parliament to raise the issue in the House of Commons. His abolition bill was finally passed by parliament in 1807, but his battle to change the law was not an easy one. Wilberforce tried and failed several times before the bill was finally passed.

Don't use plagiarized sources. Get your custom essay on
“ Achievements of William Wilberforce ”
Get custom paper
NEW! smart matching with writer

William achieved the abolishment of the slave trade, with the passing of the bill, in 1807. He remained concerned about the many people still held in slavery and carried on his campaign until the bill outlawing slavery in Britain and all its colonies was passed in 1833 – just days before he died.

Wilberforce also devoted himself to other causes and campaigns such as the limiting of the hours children should work. Like Elizabeth Fry, he also fought for improvements in England’s prisons.

He appealed for amendments to the poor law (to improve the conditions for the poor) and in 1796 became a founding member of the ‘society for the bettering condition and increasing comforts of the poor’. This organisation worked to reform parish relief and workhouses for the poor and improves their general living conditionsIn October 1784, Wilberforce went on a tour of Europe which changed his life and his future career.

He travelled with his mother and sister in the company of Isaac Milner. They visited the French Riviera and enjoyed the usual pastimes of dinners, cards, and gambling.

In February 1785, Wilberforce returned to England temporarily, to support William Pitt’s proposals for parliamentary reforms. He rejoined the party in Genoa, Italy, from where they continued their tour to Switzerland. Milner accompanied Wilberforce to England, and on the journey they read The Rise and Progress of Religion in the Soul by Philip Doddridge.

The abolitionist Thomas Clarkson had an enormous influence on Wilberforce. He and others were campaigning for an end to the trade in which British ships were carrying black slaves from Africa, in terrible conditions, to the West Indies as goods to be bought and sold. Wilberforce was persuaded to lobby for the abolition of the slave trade and for 18 years he regularly introduced anti-slavery motions in parliament. The campaign was supported by many members of the Clapham Sect and other abolitionists who raised public awareness of their cause with pamphlets, books, rallies and petitions. 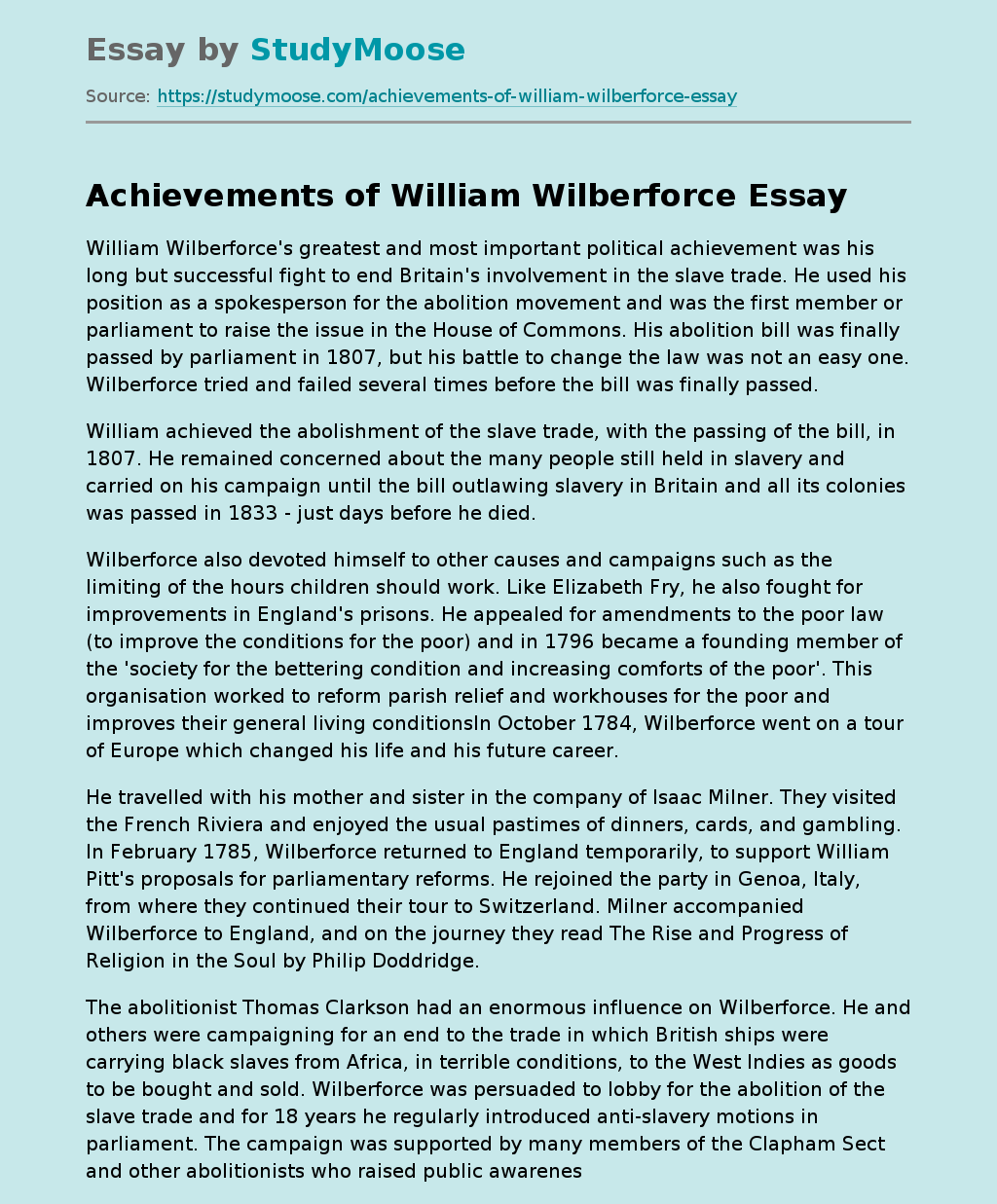