Account for the spread of Islam from its beginning to 660AD

A great journey of Islam spread from its origin to 660AD, it improved throughout the course of history to become one of a major religion with the fastest-growing population. Prophet Muhammad and the caliphs were a major factor contributed to the spread of Islam. During the recent years, it became the second largest religion in the world with the amount of 1.8 billion which is 24.1 percent of Muslims in 2015 according to a new Pew Research Center demographic analysis. (Lipka, 2017) Islam is a religion pioneered by a man called Muhammad.

Don't use plagiarized sources. Get your custom essay on
“ Account for the spread of Islam from its beginning to 660AD ”
Get custom paper
NEW! smart matching with writer

Mecca was a city in Saudi Arabia where the birth of Muhammad and the beginning of Islam occur. (Rieber, n.d.) In the year of 610 CE, the account of the Qur’an shows that while Muhammad was meditating in a cave of a mountain at Mecca named Hira, an angel called Gabriel appeared out of nowhere visited him. (Page, n.d.) The angel brought the revelation of god to Muhammad that were messages from the god of Islam, Allah.

(Rieber, n.d.) In Mecca, Prophet Muhammad privately disclosed his new revelations to his family and close friends only because if it spread wildly among the multitudes, he can be killed by the soldiers of Mecca with an illegal blasphemous practice. But as time gradually increased, the followers of Muhammad rapidly grew into an influential group of people called Muslims. (Rieber, n.d.) At first, Muhammad’s message had been spread throughout Mecca because of the opposition from the Meccans and it posed a threat to the highest authority who was the ruler of Mecca.

Even though Muhammad and his followers were banished from Mecca, they still chose to move to Medina for a continuation spreading the revelations of god worldwide; Islam based communities were developed in order to support lots of new believers in Medina. Eventually, Muhammad came back with a massive army of Muslim soldiers having more than enough strength to be able to occupy Mecca and the plan of Islam of infiltration succeeded. (BBC, 2011)Islam was mostly spread through by various of military conquest, trade, pilgrimage, and missionaries. Military conquest had played a major role by using force of arms to conquer Saudi Arabia; therefore, it was also used in conquering Egypt, Persia, Syria and more. (Rieber, n.d.) During 624 CE, Prophet Muhammad led an army of Muslim soldiers to war at Badr and it was the first war they won called The Battle of Badr. This victory was a very big milestone in the establishment of Islam; they are able to advance in achieving their missions in spreading Islam to more places. (Bunting, n.d.) Continued in 628 CE, the conquest of Mecca happened. It was a bloodless battle because Prophet Muhammad declared no harm to the army of Meccans and this victory greatly built the confidence as well as the reputation of Islam. (KHAN, 2017)Another factor was through intermarriage. It is an oath swear by the couples when a Muslim man marries a non-Muslim woman, so the woman must be converted into a Muslim in order to marry him. she must obey the Sharia Law by being a Muslim therefore it was crucial that Islam can be spread through having marriages with many different ethnic groups like the Chinese, English, Spanish and more. (BILLIONBIBLES, n.d.) (Munir, 2018) (Marriage, Family, and the Faith: Women’s Conversion to Islam, 1996) For migration, it has played an important role since the 15th century in the spread of Islam. An increased of the Muslim population started in North America and Europe, it was effective because they were already embodied knowledge of Islam and sharing it to non-Muslims wherever they went. There were Muslim women around the world including the ones who migrated have high fertility rates, estimating that each woman has an average of 2.9 children around the world according to Pew Research Center. All these factors were aiding the population growth of Islam around the world. (Munir, 2018) (Lipka, 2017)Muhammad’s death may be the most influential occasion to the development of Islam because he is the pioneer to the religion of Islam and a great religious leader. Being a such an important person to all the Muslims, Muhammad only lived for sixty-three years and he was buried in a city called Medina in Saudi Arabia on June 8, 632 CE. (Haq, n.d.) Muhammad led troops to conquer Mecca and Medina when he was alive, eventually Medina became the most important religious centres of Islam and Islamic traditions even spread to the North, west and east of the Arabian Peninsula. (An Introduction to Islam 2nd edition, 2003) Actions and words of Muhammad were so important that all of them are remembered and recorded in order to form the Hadith. Muhammad is a perfect example to all the Muslims because his experiences were the longest in the religion of Islam (Haq, n.d.) After the death of Prophet Muhammad in CE 632, Abu Bakr, Muhammad’s father in law was the first caliph or successor of Islam. The whole Arabian Peninsula was solidified under the influence of Islam because of Abu Bakr. (Rieber, n.d.) Abu Bakr was a prominent scholar and a believer who preached to others and successfully convert many important people into Muslims that had benefited Islam like Uthman, Zubair and more. (An Introduction to Islam 2nd edition, 2003) Umar was the name of the second caliph. He was a strong and great leader in the religion of Islam because he was the pioneer in planning the most effective plan to spread Islam to some of the large continents like Europe, Africa, and Asia. This plan was a highlight in pushing Islamic movement to make Islam a world’s dominant religion in the world now. (Rieber, n.d.) In this century, Islam has become a successful religion capable to influence people all around the globe. The unity of Muslims in their beliefs of their religion are the most important to their success till today, therefore all Muslims are under many same pressurised circumstances like customs, strict rules and so on. In the end, weapons that contributed in the spread of Islam to conquer, convert and spread; It is mostly the power and the authority that sustained Islam for approximately 1400 years till this day.

Account for the spread of Islam from its beginning to 660AD. (2019, Aug 20). Retrieved from https://studymoose.com/account-for-the-spread-of-islam-from-its-beginning-to-660ad-essay 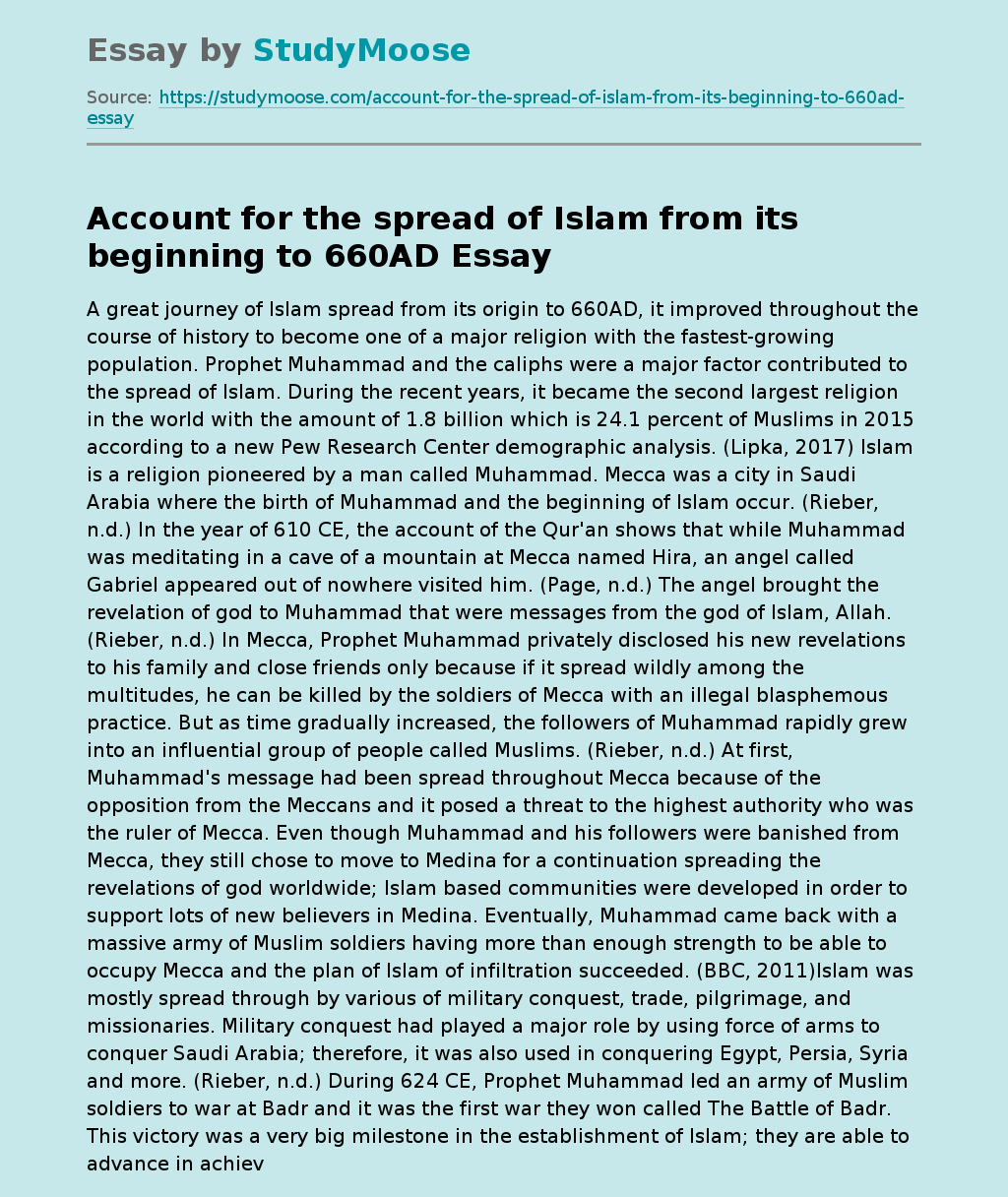