Don't use plagiarized sources.
Get Your Custom Essay on Acceptance Is Freedom Just from $13,9/Page

Through various situations within the short story, Flack shows how the Duvitch family, a new immigrant family who move to the town, have limits on their freedom because they are not accepted by their new community.

When you are not accepted, life can be pretty miserable. You are feeling lonely, judged, and slightly offended, wondering what you did wrong. In the Strangers That Came to Town, this is the case of Mr. Duvitch. Mr. Duvitch is revealed to be a kind, humble, and generous man, but the town does not accept him for a variety of reasons. Syringa Street, the area in which the story is set, is described as a prosperous town, where most hold good jobs. However, in order to make money for his family, Mr. Duvitch works a less than desirable job, and is looked down upon by his peers for his occupation. He is “classified as an untouchable” (Flack) socially, because he is viewed as lesser and not worthy of the town’s attentions. This isolates him from the town.

Additionally, he faces ridicule on the way to work, as “the Syringa Street young, meeting him on the street, sometimes stopped their noses as they passed him by” (Flack). In all these instances, Mr. Duvitch is deprived of acceptance, and because he is not accepted, he is not free. He cannot be free to have social interactions because he is socially untouchable, and he is not free to live without judgement. The effect of acceptance and freedom can be shown again in this passage of the story: “Overjoyed to have neighbors in his house, he was so full of himself that I was conscious of an invisible stature in him which made him seem quite as tall as Father.” Because Mr. Duvitch felt accepted in that situation, he was free to be himself and live without judgement. His real personality shines through, and he is truly free in the moment. Mr. Duvitch is impacted strongly by acceptance and freedom throughout Flack’s short story, and his children and wife are impacted by this theme as well.

Within The Strangers That Came to Town, the remainder of the Duvitch family experience situations in which they are not accepted or free. Because Mrs. Duvitch rarely leaves the house, the other women of the neighbourhood immediately judge her, going as far to start rumours that she has a skin disease. Mrs. Duvitch is judged before anyone has so much as said a word to her, and is not accepted. She is impacted by this lack of acceptance because she is not free to feel comfortable living in her town without people spreading false rumours about her personal life. Her children are also judged by other children in school, making them feel unaccepted and isolated. The story says that “some of their classmates scoffed at the leaf, lard and black bread sandwiches they ate for lunch, huddled in one corner of the recreation room, dressed in their boiled-out ragpickers’ clothes.

After school they headed straight for home, never lingering on the playground” (Flack). It is important for children to be able to socialize and express themselves, and the Duvitch children are not free to do so without being ridiculed by the very same children who ridicule their father. They do not feel comfortable enough to play with the others, as any other child is free to feel. Because they are not accepted, they are not free to be themselves and make friends with other children, as other youth do. However, when the Duvitch children are accepted by Tom and Andy’s family, they express themselves openly. They feel free to showcase their talents, which are received greatly by their new guests. When they are accepted, they are free, and thanks to Andy’s father, the whole town now embraces this theme of acceptance and freedom.

Andy’s father is a vital character to the theme of acceptance and freedom, because his character is instrumental to all the turning points in the freedom of the Duvitches. In the beginning of the story, he and his family are cordial with the Duvitches, but they do not greet the family or seek their company. At this point in the story, the Duvitches are being judged and ridiculed, and while Andy’s father does not participate in the offending activities, he does not help the Duvitches through this time, leaving them unaccepted. At the pond, he greets Mr. Duvitch, who is happy to just be acknowledged.

In conclusion, the theme of freedom and acceptance is shown through the characters of Mr. Duvitch, Mrs. Duvitch and the children and Andy’s father. They demonstrate that true freedom is about being accepted, through the scenarios that Ambrose Flack has written for them to endure. In The Strangers That Came to Town, the Duvitches become truly free at the finale of the story. In our own lives, we must ask: what can we do to help others become truly free?

SOURCES: Flack, Ambrose. The Strangers That Came to Town. Web. 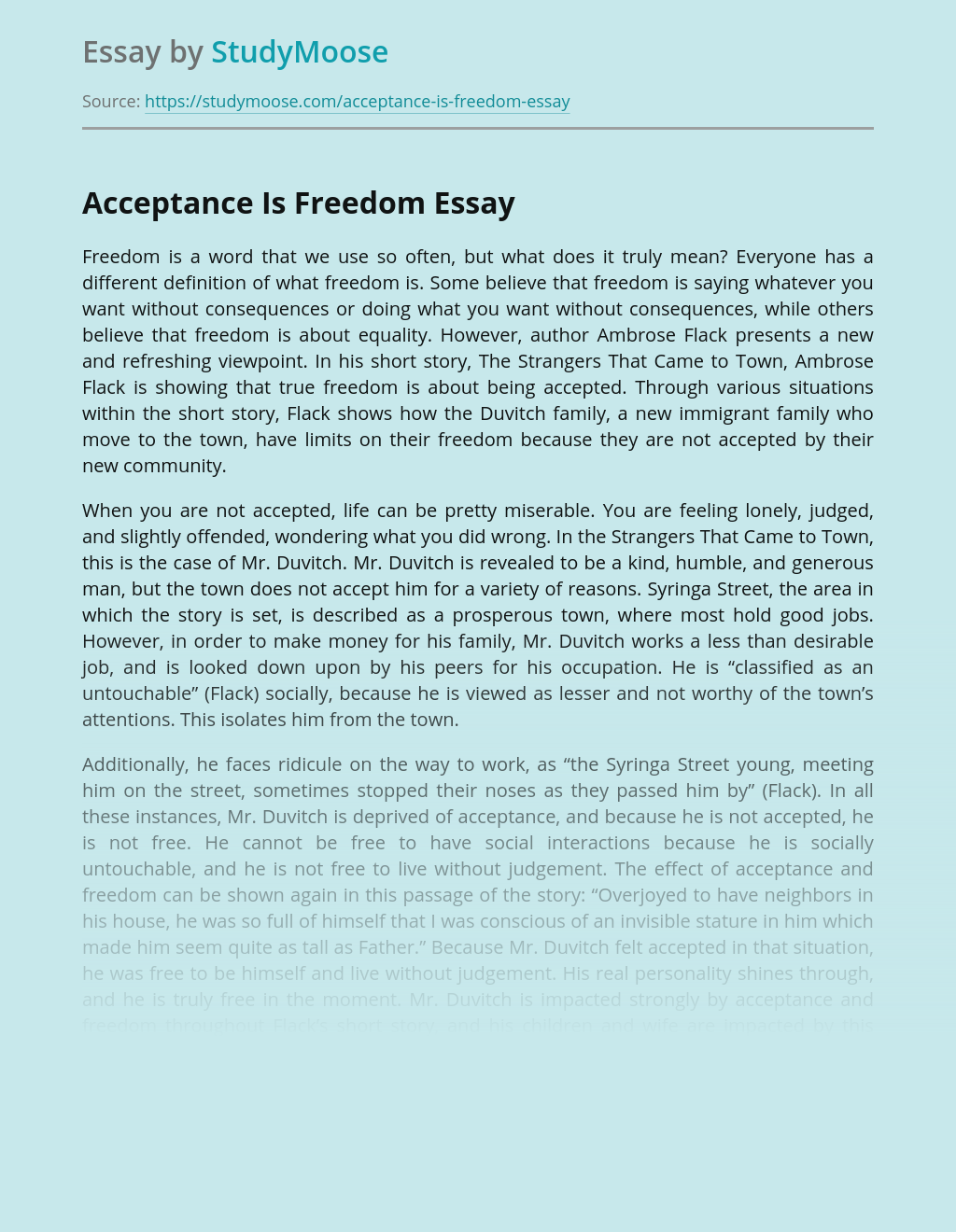 Rate this post Amitav Ghosh (born July 11, 1956), is a Bengali Indian author best known for his work in English fiction Life : Amitav Ghosh was born in Calcutta on July 11, 1956 in a Bengali Hindu family, to Lieutenant Colonel Shailendra Chandra Ghosh, a retired officer of the pre-independence Indian Army, and was...

Rate this post A group of eight Japanese gentlemen: Most of them wore glasses and most of the time they were smiling. They talked in a not very understandable language. A beautiful young lady: Blonde hair and pretty girl. She had thin features and a gorgeous face. She looked very sophisticated. And her fiancé: He...

Rate this post A Wife is a story written by Manuel Arguilla about a man who comes home to his province to introduce his wife from the city to his family. This short story won first prize in the Commonwealth Literary Contest in 1940. Baldo – younger brother of Leon, fetched Leon and Maria from the road to Nagrebcan...

"And of Clay We Are Created"

Rate this post “..The weeping of orphans and wails of the injured filled the air, the little girl obstinately clinging to life became the symbol of the tragedy.” In the short story, “And of Clay Are We Created” Isabel Allende creates a story about a young girl who is trapped beneath gravel and mud. The...