Marjane Satrapi‘s graphic novel Persepolis is an autobiography that depicts her childhood up to her early adult years in Iran during and after the Islamic revolution. Throughout the novel Satrapi incorporates character development, religion, and the conflict of freedom vs. confinement in order to develop a greater appreciation between two opposing eastern and western cultures. When analyzing the current relationship between eastern and western cultures, it seems as if tensions and conflict arise from a complex and layered set of problems.

Don't use plagiarized sources. Get your custom essay on
“ Cultural Acceptance in Marjane Satrapi’s Persepolis ”
Get custom paper
NEW! smart matching with writer

These issues range from political, economic and military stances to opposing cultural beliefs. The genesis of these issues arises in a lack of empathy for the people in each nation. Satrapi uses character development to form a persona surrounding her childhood that makes the reader understand the human aspect of someone they would otherwise not relate to. The focus on her childhood establishes innocence.

This innocence is what initially gives the reader the ability to view a different prospective with an open mindset.

Satrapi also builds on this innocence with events in her childhood that can be appreciated by both eastern and western cultures. When she interacts with her friends they talk about romance and the opposite sex, dreaming of their price coming to save them. This is not something that is exclusive to young Iranian girls, but to all young girls. This similarity pulls the reader’s attention away from the fact that Marjane Satrapi is Iranian and builds a focus simply on that fact that she is a person with the same emotions and feelings as the reader.

Satrapi also establishes the persona of her childhood through her personal morals.

Throughout Persepolis Satrapi is vehemently concerned with social injustice, and is seen as a very empathetic child. She gets mad at the suffering of those who are in a lower social class because she sees how tormented they are. In chapter 3 of the novel Marjane takes a bath for hours in an attempt to understand how her grandfather felt in a water-filled torture cell. The reader incorporates the beliefs, morals, desires, fears, and overall likeness that Satrapi conveys in her novel and gains a greater understanding of relationship all people possess through human nature.

Although humanity shares a similarity in their greater design, there are still strong ideals that have existed since the foundation of civilized society. History has shown that the ideals formed through religion have become the most confrontational between differing cultures; however, Satrapi chooses the general aspects of faith and devotion and uses them as a connection between eastern and western religion. The more obvious physical differences between religions that Satrapi presents are pointed out in Joseph Darda’s article when he says “In this set of panels1, Satrapi introduces the reader to a familiar image, an Iranian woman in traditional hijab. Satrapi describes how most women hated the outfit because of the heat and awkward fit, but also appreciated the sense of security it gave them.” The hijab is something that the western audience cannot fully understand, however it is another example of how Satrapi is leading the readers to understanding Arabic culture.

What stands out as the strongest tie between the east and west is the theme of freedom and confinement that both cultures value and desire. When comparing the Iranian revolution and the American Revolution the desire for freedom is a shared stake the two nations fought to obtain. The American colonies sought freedom from the British Empire and the corruption that was oppressing them. The Islamic Republic sought the same freedom from the oppression and corruption established in the Pahlavi dynasty, under Mohammad Reza Shah Pahlavi. Even though the two ideals grew into conflicting ideals the reader is able to appreciate a universal right of freedom. By connecting the desired independence sought by both revolutions, the reader sees the seemingly opposed political powers were founded by the same ideal. Satrapi’s parents’ desire for her education is what initially keeps the family from leaving. The reason then becomes the militant control of the city and the constant fighting that prevents them. Eventually Satrapi’s parents see how dangerous it is and send her away, yet they make the choice to stay. It seems odd that her parents wouldn’t leave with her.

When analyzing the statistical data presented in the “Middle East Research Information Project,” the casualties witnessed by Marjane and her family, “rose near eight thousand just in their hometown” (MERIP, 3). The death of Iranian citizens was not only brought by the fighting of the Mujahedeen rebel army, but anyone that was seen as a threat to their new ideals. Executions were common and always practiced in public according to Keith Jones’s article, “Tragedy of the Iranian Revolution.” In the face of this present danger it is hard for the reader to comprehend the logic in wanting to stay amongst the violence. What Satrapi presents as reasoning to the reader is the fact that her parents have always lived in Iran. They don’t know anything else. To evacuate raises a lot more internal conflicts for her parents than it would for their daughter who has not had time to settle in one area. Ultimately the decision not to leave goes beyond cultural ties, educational reasoning, or even being forced to stay. There is a natural tendency for man to become complacent and turn a blind eye to the evadable. Its human condition. People do not wish to think about the possibility of their entire lives being changed for better or worse. Even though this aspect of conflict is not shared by all of her readers, Satrapi’s descriptions instill sympathy and draw on the readers’ pathos in order to connect their emotions.

Since the genesis of mankind, people have identified and sought their own uniqueness. Personal characteristics that define what they are viewed as. Man’s uniqueness does not have to be a source of conflict, but rather something to be appreciated. This is the moral that Satrapi is conveying by connecting eastern and western regions. Satrapi use of character development, religion, and values of freedom as a common ground for an understanding to be built between these two cultures. Ultimately Satrapi wishes for the reader to use her story as a way to not only appreciate personal uniqueness, but appreciate the uniqueness of others as well. As a civilization moving towards this concept of acceptance, a new ability to maintain peace and harmony will be nurtured. It seems ironic that an author such as Marjane Satrapi would be so bold in her value of mutual respect given all of the violence and persecution she endured throughout her early life; however, it is those negative experiences that give her the desire to live in dedication towards equality.

Darda, Joseph. “Graphic Ethics.” Theorizing the Face in Marjane Satrapi’s “Persepolis” 40.2 (2013): 31-51. Web. 1 Apr. 2014.
Journalist Joseph Darda discusses the implications of the Iranian revolution. In this article there is a focus on the political as well as social aspects that this conflict induced. This article was chosen because of its moderate stance on the Iranian revolution. Both sides of the conflict were presented.

Jones, Keith. “World Socialist Web Site.” Tragedy of the Iranian Revolution. WSWS.org, 11 Feb. 2009. Web. 01 Apr. 2014.
Keith Jones focuses on class conflict and the consequences that the Iranian revolution has on the caste system in Iran during the late twentieth century. This article was chosen because of the cultural conflict Mr. Jones
presents, and how it relates to similar conflicts in Persepolis

Satrapi, Marjane. Persepolis. New York, NY: Pantheon, 2003. Print.
Marjane Satrapi’s graphic novel Persepolis tells the story of her childhood and the trials she faced with her family during the Iranian Revolution. This work was chosen because of its focus on the implications and consequences of cross cultural conflict Outline

I Introduction
a Background Information
Thesis: Throughout the novel Satrapi incorporates character development, religion, and
the conflict of freedom vs. confinement in order to develop a greater appreciation between two opposing eastern and western cultures.
b Transition

IV Freedom & Confinement
a Main Point: The desire to overcome oppression and obtain freedom is a foundation of both cultures. Marjane and family’s lack of freedom inspires emotion from the reader.
b Relation to novel
c Explanation
d Text Support: Statistics from MERIP
Quote from Keith Jones Article
e Tie into thesis & transition to next topic> 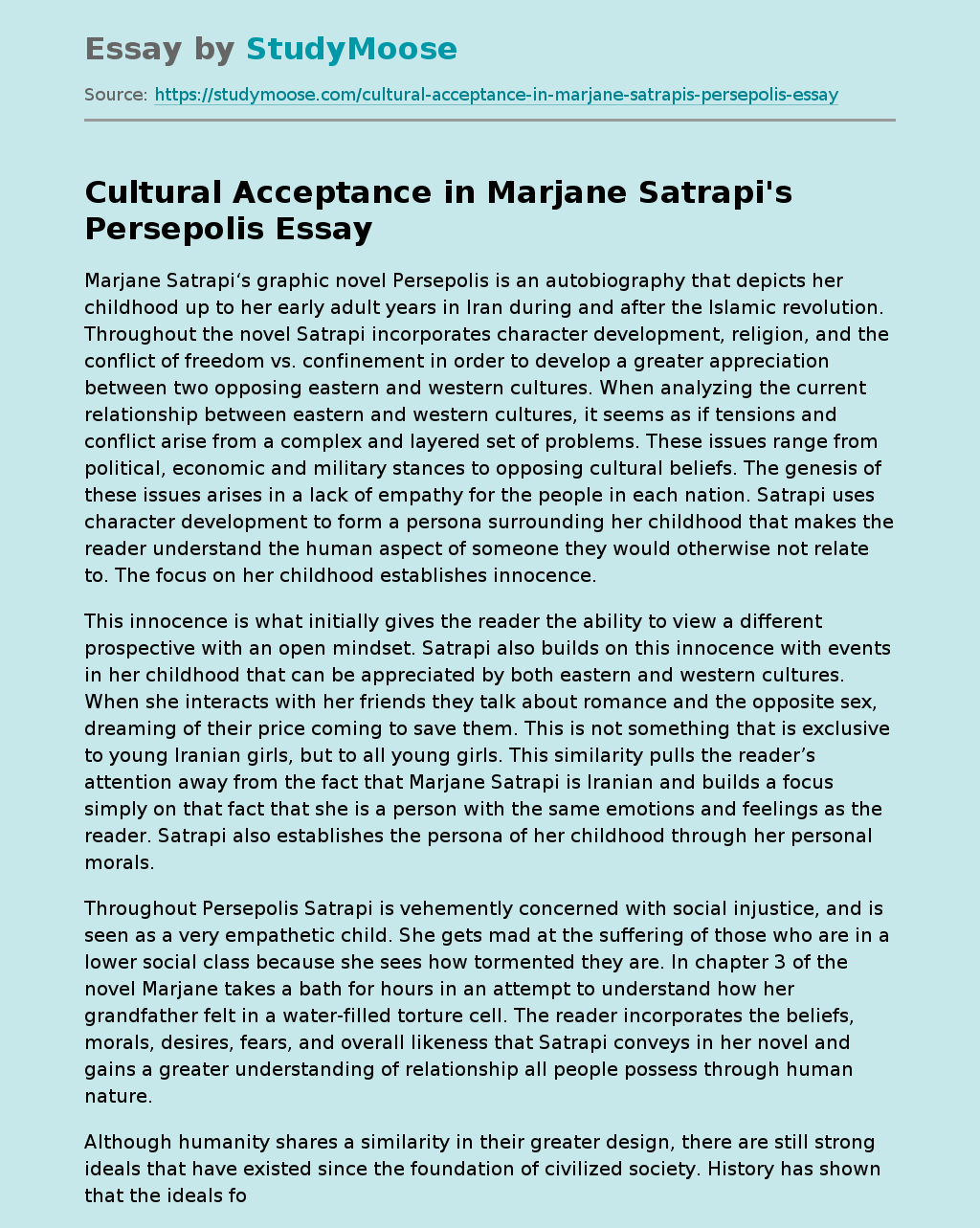