An Analysis of Satrapi’s Persepolis

Persepolis presents the Islamic Revolution in Iran through the point of view of a child who questions the most fundamental practices and assumptions of Islam. Growing in a household that frowns upon the dictates of Islamic fundamentalism at a time when there is a growing presence of Islamic fundamentalists, the point of view in the graphic book offers a different look into the local Islamic movement in Iran. Through that perspective, my understanding is that the movement placed the people within the limits of a religious fence that does not give room for questions.

Don't use plagiarized sources. Get your custom essay on
“ An Analysis of Satrapi’s Persepolis ”
Get custom paper
NEW! smart matching with writer

At least in terms of forming a household behavior deviating from the principles put forward by the movement, the child is able to question her surroundings and find the answers to satisfy her desire to be fully aware of what is happening around her. In general, I see the Islamic Revolution as a double-edged sword—while it rebuilds and strengthens the piety of the Muslims to their religion and its edicts, it also threatens to lose the devotion of those who are against some of the principles advocated by the movement.

Unfortunately, the movement creates a wide gap between those who are for the movement and those who are against it, dividing the believers into two extreme opposites which defeat the essence of religion. Some of the cultural and political issues raised by Satrapi’s narrative include the negative response of Islam towards the Western societies, the conflict between fundamentalism and the changing trends in the modern world, and the issue of sacrificing or repressing individual liberty in exchange for following stringent religious doctrines.

In the narrative, the parents of the child try to expose their child to the Western culture right in the midst of the conflict in Iran. They gave her posters of Iron Maiden and Kim Wilde and they drink wine in their home despite the fact that their religion forbids them to do so. Her parents are Marxists and they try to teach her about the glaring evils of the Iranian regime. These things indicate that Iran at that time was a country where there is no stability in terms of politics and culture.

The fact that the Islamic fundamentalists at that time tried to repress those who were against their principles suggests the apparent conflict that creates the impression of turmoil. There was a struggle and it was one that was far from being over. The conflict between fundamentalism and the Western world present in Iran is best seen in terms of the attempt of the Islamic fundamentalists to do the opposite of what most democratic Western societies practice.

Satrapi’s graphic novel comments on those issues by presenting the conflicts in Iran from the life of a little girl who, despite being a child, sees her Iranian society as a crumbling society, whose principles do not promote the interests of the people but rather promote the interests of the religion. The strip also injects a bit of humor on the issue, using language that invokes comedy along with the horror of some of the images in the strips.

The use of humor indicates that the weight of the issues involved in the Islamic Revolution is so heavy that it leaves no space for the lighter side of life. Instead, the movement rejects all assumptions of gaiety in religion and culture simply because it sees those two things as entirely serious matters that require even the most harassing and physically daunting sanctions to those who stand against its way.

Islamic fundamentalists are portrayed in the strip as extremely violent individuals who are more than willing to inflict harm to their fellow Muslims if only to further the goals of the movement. They are portrayed in a negative light precisely because they are seen as agents of conservative religious principles that fail to recognize the worth of individuals. They oppose those who oppose them up to the point of assaulting them if only to silence their opposition or to put an end to those who confront the movement with questions and arguments.

Violence in protests against the religion arises because of the intolerance of the fundamentalists towards those who oppose them. I understand that, perhaps, the graphic descriptions of the fundamentalists in the strips were only part of the observations of Satrapi in her life. However, I do think that there is a deep reason as to why these fundamentalists act the way they do. I believe that their violent actions are results of their deep ties with their religion and these strong ties cannot be opposed or deposed by those who think otherwise.

To a certain degree, the antagonists in Moore’s article and in Satrapi’s novel share the similar characters of intolerance and conservative attitude. They do not subscribe to the idea of changing the status quo or of allowing others to deviate from the convention because they do not find it suitable to what they are espousing.

An Analysis of Satrapi’s Persepolis. (2016, Dec 02). Retrieved from https://studymoose.com/an-analysis-of-satrapis-persepolis-essay 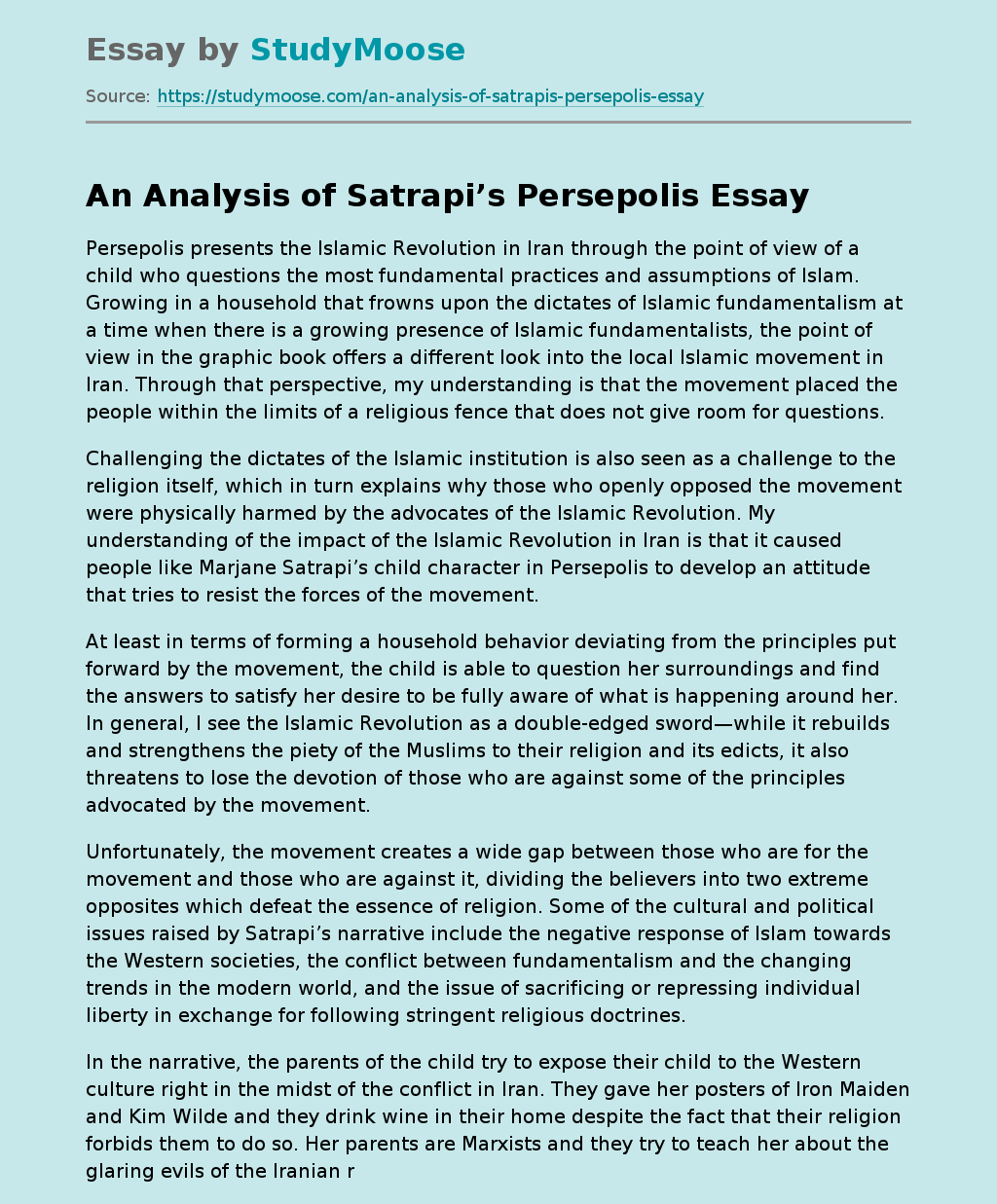