In Marjane Satrapi’s graphic novel, The Complete Persepolis, Satrapi provides a general structure of how the impact of culture over her childhood and growing up were affected by the complications and differences of The East compared to The West. Persepolis is a Bildungsroman, a novel written about the main characters psychological developments of life and their moral education. This novel is based on the author’s personal life. Persepolis is about Marjane’s struggle growing up through the Iranian Revolution.

The impact of The West influencing The East impacted Marjane’s childhood by adjusting her views on Political, Social Class, and Religious theories.

The large impact the West made on the East created a certain spark in how the politics of the time was impacting how Satrapi matured. Politics in this book were completely explained through personal experience and learning as she goes. At the early beginning of the book, Marji states, “To enlighten me they bought me books.”(Satrapi, 12) She then began listing off the things she learned about when her parents enlightened her with the books.

She learned everything from Fidel Castro to the young Vietnamese being killed by the Americans. Marjane has introduced the topic on the revolution and she then began reading about Marx and other thinkers. This gives an effect that she was completely lost on what happening in the real world. As seen farther back into the book, the page says “I put up posters in my room”(Satrapi, 131). That may not seem like a lot but there’s an indefinite meaning behind what she said.

Marji shows rebellion in politics by wearing Western clothing, listening to their music, and hanging up the posters. Marji’s return did make her change her idea on politics by showing rebellion to her country.

The Iranian society in the time when Marjane was living there, shows that cultural beliefs became corrupt by the government powers that influence the bad decision making for the country of Iran. This created lots of danger to the country itself and its people. At the beginning of the veil, she narrates “We didn’t really like to wear the veil, especially since we didn’t understand why we had to.” (Satrapi, 1) This quotation proves that, at a young age for her, Marjane rebelled not only as an adult to the world but also as a child. How does this differ to being an adult and rebellion compared to being a child and rebelling? Additionally, in the text, it states “I could be your mother, how old are you? sixteen? My daughter is twelve, forgive him.” (Satrapi, 109) The government is so corrupt in their country they made a sixteen-year-old a police officer. The authorities begin to talk bad on the West and call Marji’s father out or it.

For religious theories, Marji has always considered herself to be super religious. She has a plan into her future that related to religion. God was a big part of Marjane’s life and always was before. Marji starts off very young wanting to dedicate herself to God and become a prophet. “At the age 6, I was already sure I was the last prophet.” (Satrapi, 6) With that, Marji wanted to be known as someone that high in power and strength. In the panel, there are white beams rising out of her face. In the book, Satrapi symbolizes religion as bright and white to create a good reflection on it. A big impact in her life was also her uncle Anoosh. Marji screams to God “ Shut up you! Get out of my life!!! I never want to see you again!”(Satrapi, 70) Marji is completely lost in life at this point. She claims to not believe in God for Anoosh’s death. She tells God to go away and get out of her life. The panels become dark at this point, because of Marji’s beliefs of God fading. She’s floating in blackness, questioning herself and her beliefs. 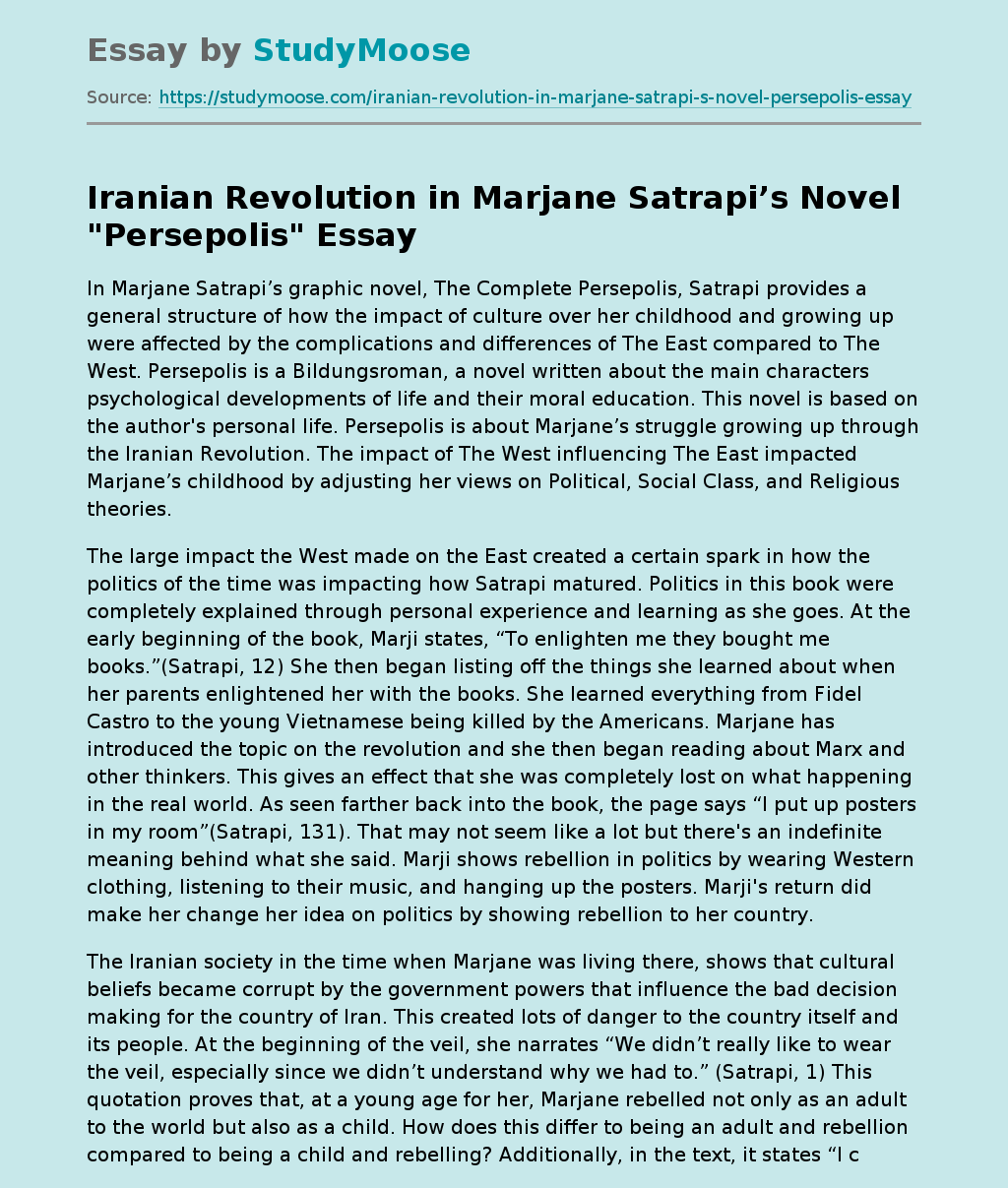