Absolutism in the 17th century

Don't use plagiarized sources. Get your custom essay on
“ Absolutism in the 17th century ”
Get custom paper
NEW! smart matching with writer

The conditions and forces that made absolutism a desirable form of government were the necessity of centralized control, the political instability of the time, and the rise of single sovereignty over a country.

Before one goes into what causes states to adopt absolutism, one must understand it. Absolutism is defined as a form of government where “sovereignty is embodied in the person of the ruler.

” The Monarch felt that he had a Divine Right, that is he was responsible to only God, and though he may respect the natural law of where he governed, generally the Monarch attempted to place his realm under absolute control. Measures included elimination of certain freedoms, centralization of power, and the creation of a bureaucracy loyal to the Monarch to help oversee the country. Through these measures, the Monarch was able to control the nobility that always threatened. The Monarch became more and more powerful as he or she began to assert power and institute absolutism.

The first reason why absolutism seemed to be a desirable government form was the necessity of centralized power. War was a constant threat to a nation and it’s people. In a country divided into kingdoms and realms ruled by individual nobles and dukes, mobilization for war was a difficult and lengthy task. To better prepare a state for war a country needed a single ruler with the absolute power. Another cause was the need for efficiently raising revenue. A monarch needed absolute control to effectively raise revenue for the cost of maintaining the state. The nation-state became more and more expensive to run during this time due to the increasing frequency of wars, the costs of trade and exploration, and to support the burgeoning bureaucracy.

A country divided and ruled by many different people would be unable to raise sufficient revenue. On the other hand, a country ruled a by a single strong ruler could more easily control and manage finances. In addition, because of the nature of the time, warfare and politics became very personal. Monarchs considered countries an extension of themselves, as exemplified by Louis XIV’s supposed remark “I am the state!” To achieve this, Monarchs effectively eliminated all competition to their power, that is the nobles and the church. In the era of the Post-Reformation, it was all too easy for Monarchs to seize power from church and nobility, and this further contributed to their power.

Another force at play that made absolutism seem desirable was the political instability of the time, both internal and external. France is a paragon example for this. There were many peasant revolts between 1624 and 1648, and “Nobles and Parlements took advantage of peasant revolts and the Regency to protest their loss of ancient privileges and levels of taxation. Barricades set up in Paris and the mob burst into the King’s bedroom.” King Louis XIII was powerless to stop these insurrections against his rule. Louis XIV soon came to power, and began to assert his royal authority. He put down these peasant revolts, reorganized government, and placed himself at its head. Loyal advisors were installed, and a deal with nobility which surrendered their authority in relation to the Crown in return for authority over their lands.

In addition, the size of the military increased, and France began to engage in wars to help solve domestic problems. These wars were generally successful and contributed to an even higher growth in Royal authority. The successes of Louis XIV encouraged other European Monarchs to follow his example. The problems of instability seemed to be only able to fixed with a steady, but iron fist. Absolutism seemed to offer this, as the king would have authority to maintain control without interference from a constitution or a law making body. Finally, the political instability forced Monarchs to take measures that otherwise they would not wanted to take, i.e. levying heavy taxes. When the benefits of these measures came in, Monarchs often looked beyond their ideals to permanently install absolutism. To sum up, the basic political instability of the 17th Century, i.e. wars, peasant revolts, etc. paved the way for Monarchs seizing absolute control to stabilize their nations.

The final cause for absolutism was the rise of single sovereignty over a country. In the times of feudalism, more than one person could have sovereignty over an area of a country. Dukes, Counts, and others may claim title to a land in addition to the Monarch’s. However the decline of feudalism brought an end to this. Kings began to assert that there could be only one sovereign to a land, and that was the King. Many new political and legal theories supported the Monarch’s absolute control over land. Jacques-Benigne Bossuet (1627-1704) adapted the medieval concept of kingship in his theory of the Divine Right of Kings, which argued that the king ruled absolutely by will of God, and that to oppose the king in effect constituted rebellion against God.

Although people should be excluded from power, God’s purpose in instituting absolute monarchy was to protect and guide society.” Coming from a moral approach, Thomas Hobbes argued that a strong ruler could best control and protect a society. Further justifying absolutism, Monarchs pointed out that it seemed to end Europe’s religious wars and had brought social and political peace. King Louis XIV believed that such absolute rule over a people was the duty of a Monarch, and anything else was failing the people. Essentially, Monarchs based their absolute sovereignty on moral and political justifications.

In conclusion, the conditions of the 17th Century made Absolutism seem to be a desirable choice for government, and rightly so. Following the example of France, many countries tried to centralize power. Yet, not all were to be as successful as France. For example, Oliver Cromwell instituted a dictatorship with many absolutist qualities, but this failed as soon as he died. But it is difficult to deny that absolutism was a powerful force in the 17th Century. Absolutism may seem harsh to people of the 21st Century, but for the many of those who experienced it, it was at least beneficial. The political instability of the time, the need to centralize, and the increasing sovereignty of Monarchs all were driving forces in making Absolutism popular and helpful. Despite its problems, absolutism eventually led Europe down the right path.

Absolutism in the 17th century. (2016, Jun 19). Retrieved from https://studymoose.com/absolutism-in-the-17th-century-essay 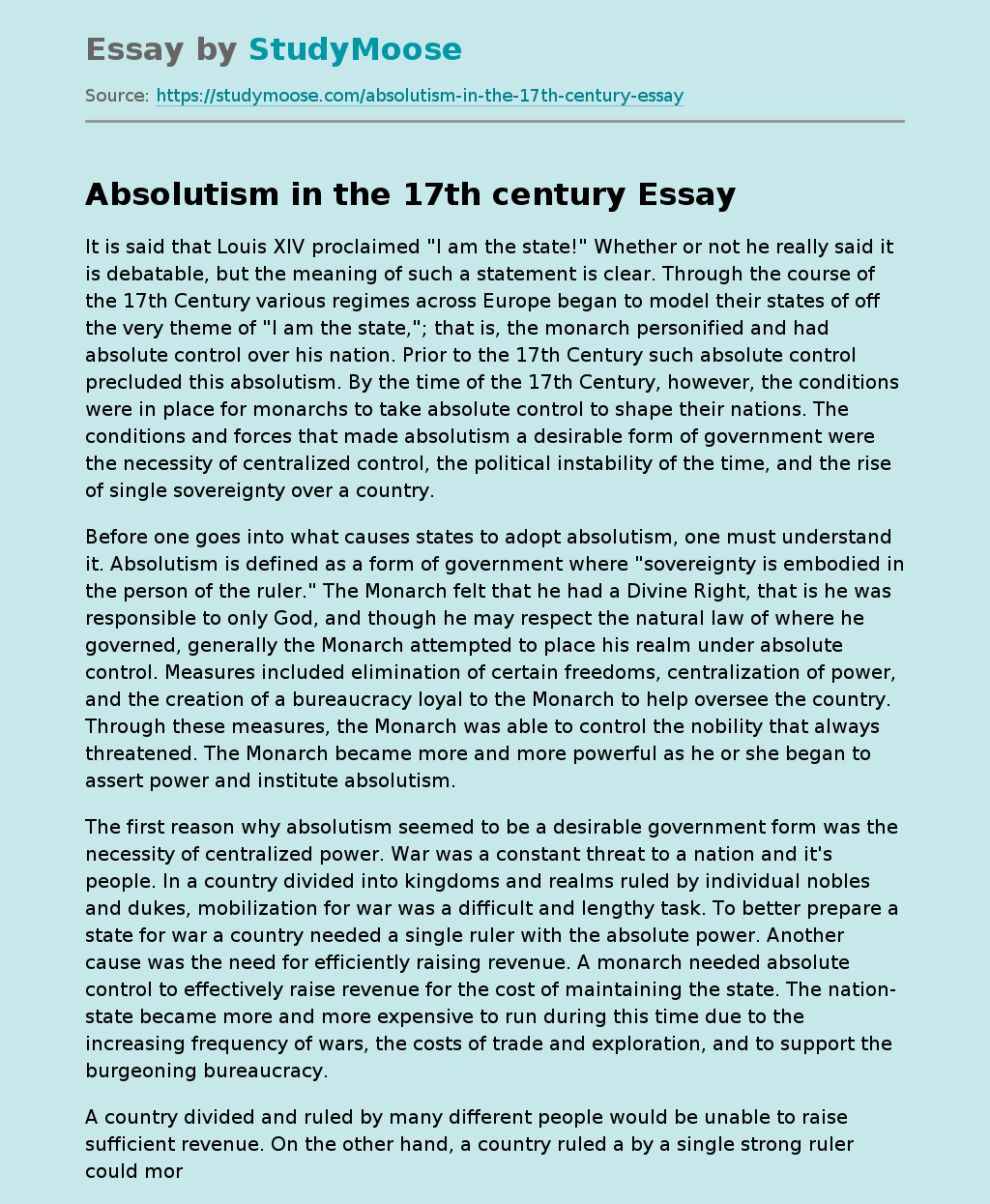