A more personal essay about betrayal

Over the past few years, I have gained much knowledge about betrayal. I have come to believe that it is close to the worst thing that people can do to each other (besides murder), and it’s something that happens more and more as one grows older.

By definition, betrayal can mean to be unfaithful, to deliver something to an enemy by treachery, or to desert a person in the time of need. Obviously, this can tell a person a couple of things.

Don't use plagiarized sources. Get your custom essay on
“ A more personal essay about betrayal ”
Get custom paper
NEW! smart matching with writer

First of all, betrayal is a broad “subject,” and secondly, it is downright malicious.

The first example of betrayal that I have given is to be unfaithful. In my eyes, this is probably the worst form of betrayal. I think this because I have been cheated on and I know that the feeling one gets when he or she finds out about the affair is absolutely heart wrenching. At first, I went to pieces when I found out, but then I got over it and I forgave my boyfriend (at that time).

Big mistake. He never stopped lying to me, and to this day he still does, even though we aren’t together anymore. I guess I should have thought twice and listened to the popular saying “Once a cheater, always a cheater.”

The next example that I choose to represent betrayal was to deliver something to an enemy by treachery. Many people have experienced this, but the largest upset was most likely when the Japanese bombed Pearl Harbor.

The Japanese government was trying to side with the Germans during World War II. The Japanese told the United States that they would not do anything, but then they bombed us, leaving our country open for anything that could come our way from the Germans. I think that is betrayal because the Japanese lied to our country. Although, I guess things turned out for the better in the end; our economy went up slightly and the Japanese were avenged…twice.

My last example of betrayal is to desert a person in the time of need. I believe that this instance is best depicted in “Hamlet,” a play by William Shakespeare. Prince Hamlet’s mother, uncle, and friends all desert him in his time of need, which was after his father’s death. This may sound quite confusing, but Claudius (Hamlet’s uncle) killed Hamlet’s father. Not even a month after the father’s death, Claudius and Queen Gertrude (Hamlet’s mother) are joined in wedlock. Nobody thought that Hamlet was sane because of everything that had happened to him. His friend’s weren’t very true to him and his mother wouldn’t believe that Claudius killed his father. For those reasons, I feel that everyone betrayed Hamlet in the sense that they deserted him in his special time of need.

As one can see, betrayal is a harshly wounding action. It can leave an imprint on a person’s heart for many years and it can also make them lose trust in loved ones. To be betrayed is to be completely deceived, and that is a hard thing to endure. I say this because I know it. It has happened to me and I will never forget it, but I have definitely overcome the pain.

A more personal essay about betrayal. (2016, Jun 20). Retrieved from https://studymoose.com/a-more-personal-essay-about-betrayal-essay 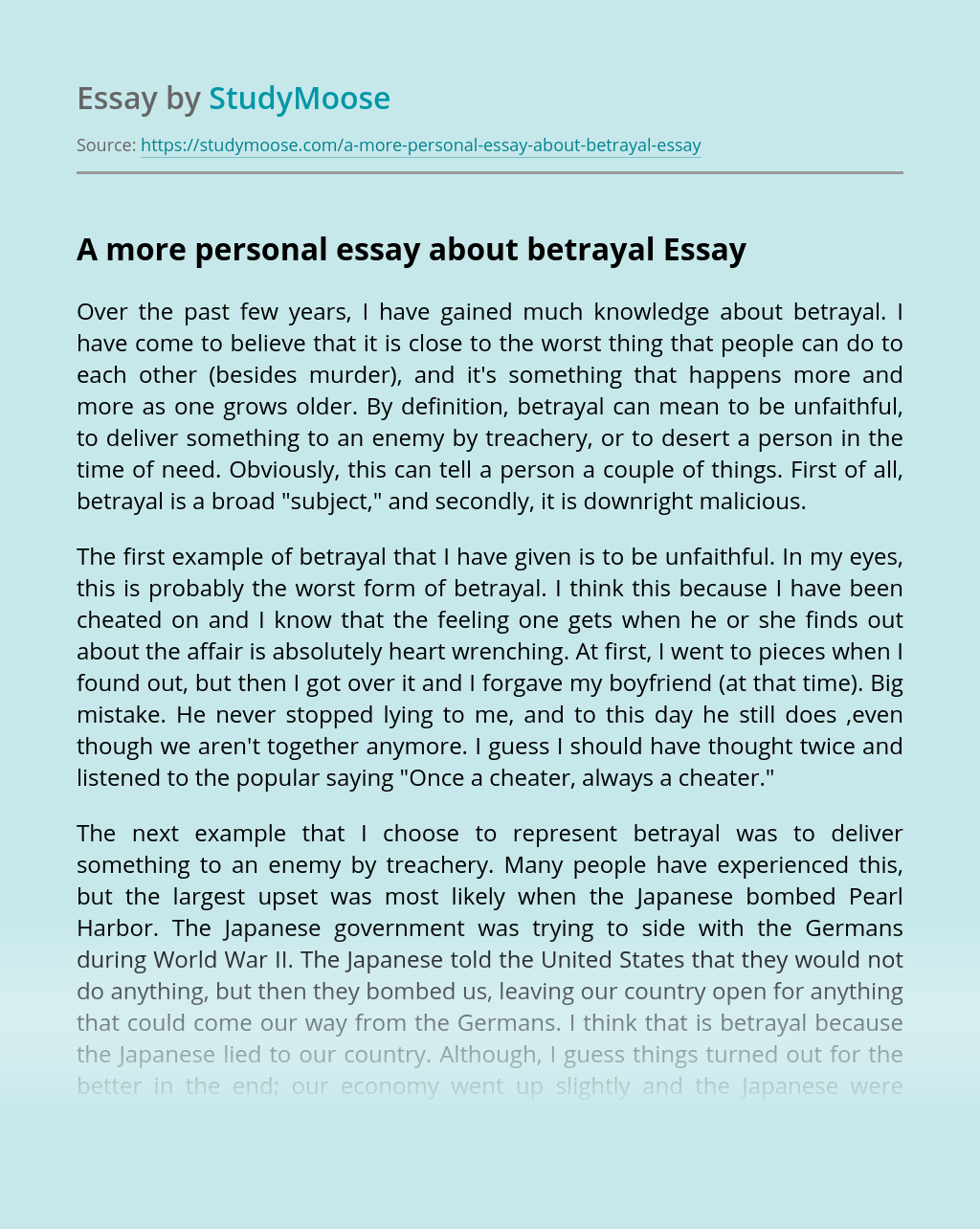