In the book Drown by Junot Diaz has expressed a persons experience and environment impacts them in a negative ways. Even the ones that help eachother throughout the way could also affect one in a negative way. It will make one do things one might not want to do and doesnt notice because their in a type of mood. They don’t realize what their decisions are taking them the right path taking challenges and overcoming them or go the wrong path to life trying to make things easy for you which means doing things that are wrong.

. In the beginning of my reading Yunior and Papi relationship wasn’t so close. Papi and Yunior were in the car together and Yunior was feeling car sick. In chapter “Fiesta” on page 29 it stated “when we were alone he treated me much better,like maybe I was his son or something”. This is saying since their father and son relationship was not close they didn’t have father and son love.

Meaning Papi doesn’t give Yunior “heat”(father love). Unlike Mami she would say “que dios te bendiga” in chapter “FIesta on on page 35 which means god will be there protecting you at all times. One night Mami and Papi were at a party dancing acting as if their teens again having no responsibilities. Yunior would be like the security guard making sure nobody trashes the party. Mami and Papi are two different people. Papi would cheat and Yunior would find out at the parties.

Papi was too strict because he would tell Yunior and his brother in chapter “Fiesta,1980” on page 37 said “ If you eat anything I’m going to beat you ¿Entiendes? I nodded And if your brother gives you any food, Ill beat him too right in front of everybody. ¿Entiendes?” This means that the father didn’t have any respect towards his son or the people at the party. The father doesn’t care what happens to his son he wants to be the boss.

This affects Yunior in a negative way because Yunior would be scared of his own father and wouldn’t have the love of his father. Yunior would like to eat the food that they have at the party but his father said no! A real father wouldn’t do that to his own children. If Papi was a real father he would treat his children in a nice way as a real caring father. This overall affects him when he continues to grow up when Yunior has his own children. He would treat them with more love because he didn’t get love from his own dad. Yunior would probably doesn’t want his children to grow up like that but better. Time has passed by and Yunior has lived without his father for nine years of his life. This could affect him because so many things could have been happening in his life and Papi was never there for him.

This affects him because they don’t have a close relationship. Mami took care of them for a long time and was always with them because she would work for 12 hours. Mami has worked at a bar but the neighborhood they live in isn’t safe. So men walk her home. Yunior could also be affected by Mami because while Papi wasn’t in their lives Mami had to do everything possible so Yunior and his brother would have everything needed for example food,clothes and water etc. Which means when Mami works shes away from her children. In this case Junot Diaz fails to prove the purpose that the people that help you throughout the way in life could affect one in a negative way. In chapter “Aguantando” on page 75 Yunior says “I never wanted to be away from the family,Intuitively distances could harden and become permanent”. This is saying since his father was away for many years and he doesn’t want to have distance between family because soon they’ll become strangers.

This connects to the authors purpose that a persons experience and environment impacts them in negative ways. There will be changes in life, they might be positive or negative.This proves how Yunior felt about his family being separated not being a normal happy family. He expresses his sensitive side that family is supposed to be close and never should distance be a problem. In chapter “Aguantando” on page 83 it states “Rafa was right.It wasent the first time in two yeras after left. Papi wrote saying he was coming for us and like an innocent, mami believed anything. she prepared a party even lined up to have a goat there for slaughtering. she bought me and Rafe new clothes and when he didn’t show she sent everybody home.” This says that Papi wrote a letter to them saying he would go get them but he lied. Mami tried her best to have a welcome party when papi arrived. This also proves that Papi affected the whole family. But the father doesn’t seem to care at all. When Yunior grows up he will probably try to be a better father to his children than his own children. Without his father it also affects him to what kind of friends he has. Because he doesn’t have a father advice.

Yunior shoplifts and sells drugs. His mother probably didn’t notice because she was busy with work and and payed more attention to her childrens needs like having food,shelter and good to go to school. But not emotionally on how Yunior felt about Papi not there with him and Mami working all the time for them.. Yunior could have a empty space in his heart because his family isnt complete. Ramon De Las Casas (father) left Santo Domingo before his fourth birthday. “Papi had been planning to leave for months,hustling and borrowing from his friends or from anyone” on page 163. This is saying thats his father left him at a very young age. Yunior will live without fathers love. His father wanted to leave and probably didn’t think about it carefully he just wanted to leave right away. “After a fork pierced him in the cheek, Papi decided to move ,just until things cooled down. He took a small bag of clothes and broke out early in the morning” on page 163 from “Negocios”.

Mami and Papi had a argument and and Papi just decided to leave and not communicate with each other. This would affect Yunior because at this time he was little and probably wouldn’t understand things. Maybe he thought his father just didn’t want to be with his family and doesnt love them. Subsequently a person could be affected by their environment and experience “ He was twenty four. He didn’t dream about his familia and wouldn’t for many years. He dreamed instead of gold coins,like the ones that had been salvaged from the many wrecks about our island,stacked high as sugar cane” in chapter “Negocios” on page 169. this is expressing that Ramon didn’t care about his family and the love they have for him. He just wants to be rich and leave. This would affect Ramon and Yunior because Ramon won’t have nobody to be with and Yunior would be affected by not having his father with him in his childhood.

He would probably ask himself ”why did he leave us? why doesn’t he love us?” Overall one is affected by the environment and experience they go through. It is always important to value things in life even if their little. Big or little things affects one in a positive or negative way. Junot Diaz’s proves that a person’s environment and experience affects them in a positive or negative way. But overall one must not let negative things that happen in life to a serious impact on one because it brings us down emotionally and mentally. One must always be grateful to what they have not everyone has the same things as one does! 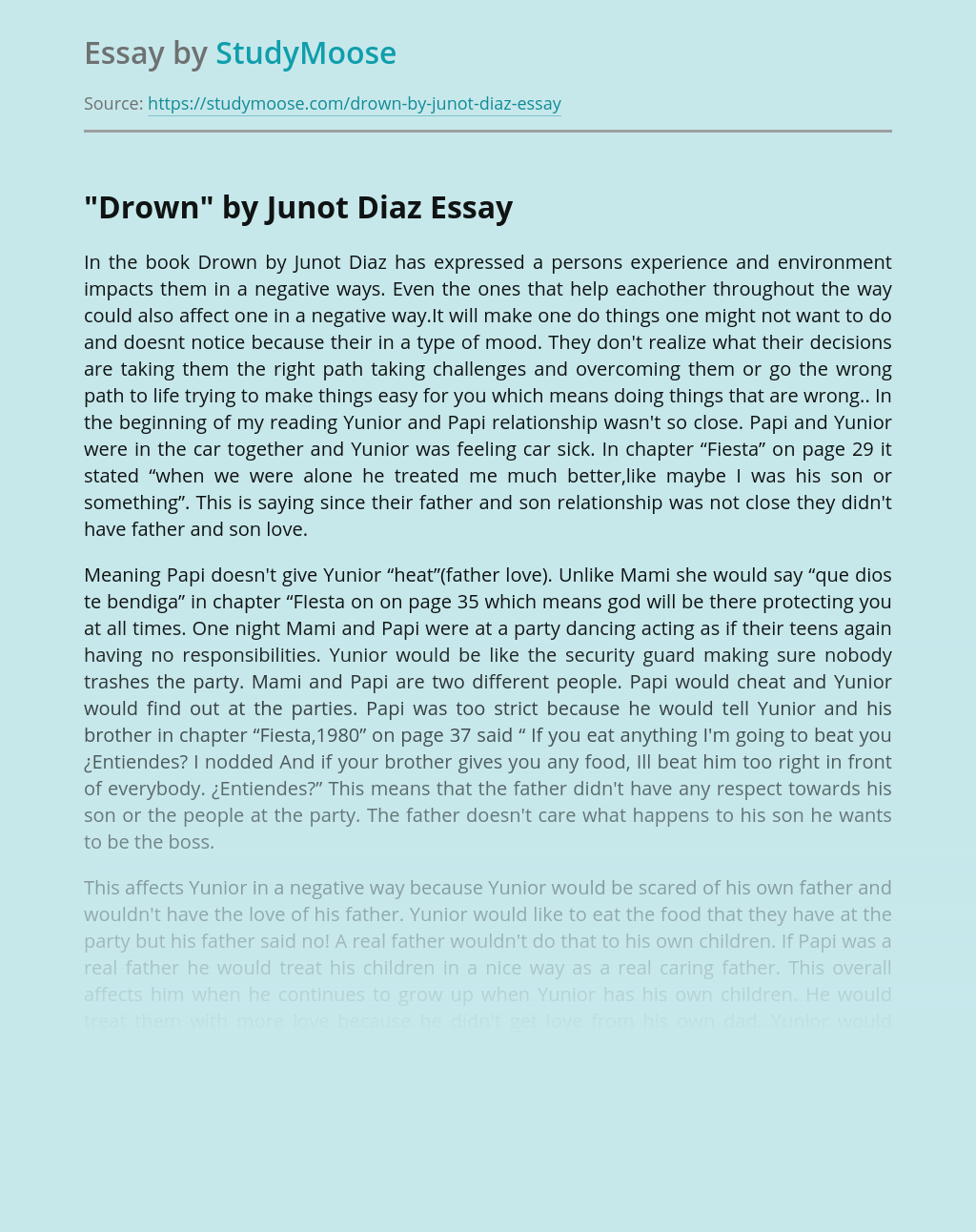 A group of eight Japanese gentlemen: Most of them wore glasses and most of the time they were smiling. They talked in a not very understandable language. A beautiful young lady: Blonde hair and pretty girl. She had thin features and a gorgeous face. She looked very sophisticated. And her fiancé: He looked very handsome...

The Blue Jar contains a variety of important elements in terms of prose fiction. With a unique plot structure, manner of symbolism, theme, and depiction of characters, Dinesen develops an interesting work of fiction that seeks to instill certain ideals in the reader. The point of view is that of an omniscient narrator. The Blue...

Get Essay
Point of View in Toni Cade Bambara's "The Lesson"

Point of view is an essential element to a reader’s comprehension of a story. The point of view shows how the narrator thinks, speaks, and feels about any particular situation. In Toni Cade Bambara’s “The Lesson,” the events are told through the eyes of a young uptown girl named Sylvia. The reader gets a limited...

Review of "Peer-E-Kamil" by Umera Ahmed

Pir-e-Kamil (SAW) meaning The Perfect Mentor, is one of the fiction novel written by well known and famous Pakistani writer Umera Ahmed. The book was firstly published in 2005 in Urdu language and later on in 2011 the book was published in English language too. I have decided to write review on this book because...

"The Flowers" and "Shaving"

In “The Flowers” and “Shaving” both authors at the beginning of both stories use symbols about joy and happiness, these symbols change during the stories. It’s like a parabola beginning with joy, it gets to a maximum point that’s the climax and then it declines to sadness, help and mercy. Symbols in the story are...

The poem “Rising Five” by Norman Nicholson is a story-like, free verse poem, written in first person narrative and describing the cycle of life. There is no visible rhyme scheme, it has no pattern and the stanzas are mostly very short, emphasising the short life that we live. Also, “Rising Five” is a juxtaposition of...