Genre is a term that is used to classify or describe a type or form of literature. While this sounds like a simple concept, it in actuality is a very complicated classing system. The reason for the complication is that literature does not always follow the typical characteristics set up by that type of genre. For example, one of the characteristics in the genre of tragedy is that there is a tragic hero, who is in a position of power. In the classical tragedy this is true, as can be seen in Sophocles’ Oedipus Rex because the tragic hero is Oedipus, who is the king of Thebes.

Don't use plagiarized sources. Get your custom essay on
“ A Midsummer Night’s Dream ”
Get custom paper
NEW! smart matching with writer

In the Renaissance tragedy this is not always the case such as in Shakespeare’s Hamlet, the tragic hero is only a prince. Where this characteristic is completely abandoned is in the modern tragedy by Eugene O’Neill, Desire Under the Elms, where the character playing the tragic hero is a farmer and it is difficult to determine which character is the true tragic hero.

Yet all these plays are tragedies, despite their variations . Another aspect of genre that makes the concept difficult to define is that there are parts of plays that fall into other genres.

An example of this is seen in parts of Desire Under the Elms, such as the party scene at the Cabot home. Although this play is a tragedy, in this scene there is comedy occurring in the witty remarks from the partiers and in the silly jig Ephraim dances.

Another type of representative genre is Dialogue, which consist of more than one character speaking with each other. In this form, the audience acts as a third party and only gets to overhear and not have someone speak to them directly. An example of this is in Desire Under the Elms because the characters just converse with each other. The final type is Narrator plus Dialogue and this is a combination of the first two. The characters speak to each other but there is one character who acts a narrator and tells the audience what is going on. This is exemplified in a new sitcom called Titus.

In this sitcom the characters talk to each other, but the main character Titus has side conversations with the audience where he reflects on the events. The other category of genre is the narrative genre in which the type of plot is described. These can be combined as is shown in my earlier example of comedy showing up in tragedy or a romantic comedy. The categories of the narrative genre are tragedy, comedy, romance, and satire. The first category tragedy starts with a problem that the tragic hero must solve, be it revenge taken or the truth discovered, and ends with the resolution to the problem where the tragic hero is banished or killed.

The purest example of a tragedy is Oedipus Rex because there is a problem that the hero must solve and he is banished in order to solve the problem. Another type is the comedy in which there is a less significant problem that the characters try to solve and the story ends happily with the characters uniting in a marriage or party. A Midsummer Night’s Dream exemplifies this because there is a plague due to the fighting of Titania and Oberon and there are young lovers trying to overcome the attempt at separating each other. The characters try to solve these problems and at the end there is a marriage and a party.

Romance is another form of narrative genre in which the all begins well the characters are separated but the solution is they reunite and live happily ever after. This can be seen in the young lovers mentioned in A Midsummer Night’s Dream. Finally, Satire is a category in which an existing story is spoofed. An example of this is the movie Naked Gun which satirizes the old cop movies. In comparison to other types of literature courses, the study of genre has advantages in that it helps to classify literature in ways that make it easy to see the typical characteristics.

This can aid in comparing different works of literature and provide a starting point in analyzing literature. The problem with studying genre is that because it is so vague and that the works do not purely follow the guidelines in the genres it is difficult to define genre. Also, it is difficult to define the works using genre because there are so many different types of genre that different parts of the works can fall into. Teahers Note: You’re welcome to your opinion, but this part would certainly be stronger with an upswing at the end, maybe reviewing some of the insights gained by what you’ve written here. 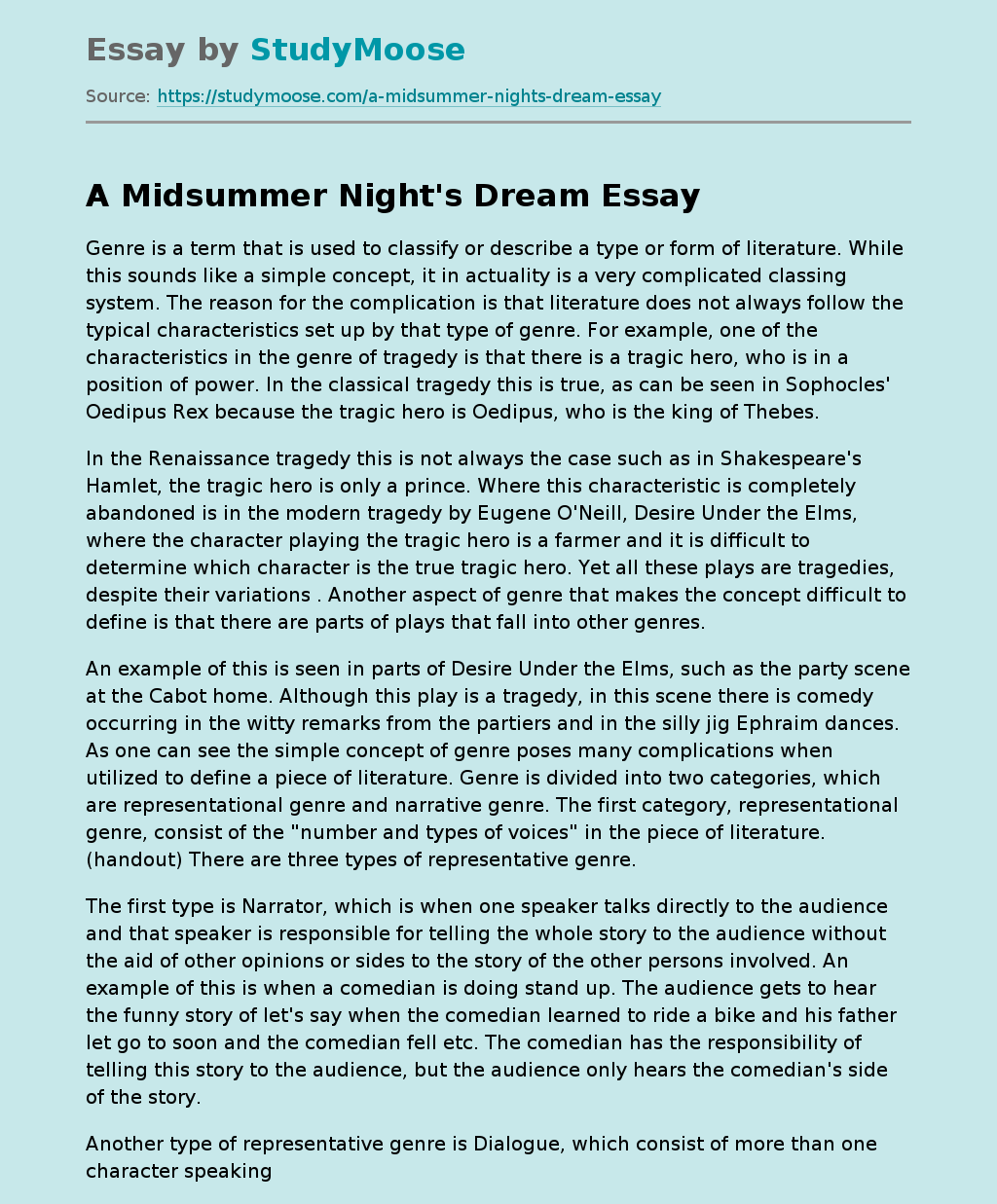