A History of Journalism in the Philippines

Revolution, the press, which plays a potent role in the promotion of truth, justice, and democracy, and of peace, progress, and prosperity, was liberated from dictatorship. During this period, crony newspapers were closed and the National Press Club and the Philippine Press Institute were revived to professionalize mass media in the country. During this period, significant changes, advances, and developments have taken place in Philippine journalism. Newspapers and periodicals have expanded in pages, sections, coverages, and circulations.

They have become venues of sensitive issues like death penalty, charter change, juetengate scandal, and visiting forces agreement, and of diverse issues about the civil society, land reform, human rights, genders issues, and other areas that before the 1986 EDSA Revolution were previously ignored or minimally covered.

Don't use plagiarized sources.
Get Your Custom Essay on A History of Journalism in the Philippines Just from $13,9/Page

Some investigative reports have led to further investigations, have enhanced transparency, and have reduced corruption in the judiciary, executive, and legislative branches of the government.

These developments are attributed to the continuing efforts of the newspaper and the periodical industry and their research and academic organizations: the Philippine Center for Investigative Journalism, which conducts rigorous research in the affairs of the state; the Center for Media Freedom and Responsibility, which upgrades professionalism and responsibility of media practitioners through seminars, workshops, and publications; the Philippine Press Institute, which conducts trainings and sponsors the Annual Community Press Awards that recognizes excellence among provincial newspapers and periodicals; and the Asian Institute of Journalism and Communication, which offers graduate studies in journalism and in communication management and conducts media research, interim training, and policy advocacy.

Among the Sunday supplements of daily newspapers, Panorama of the Manila
Bulletin has the highest number of circulation, 300 000, followed by the Sunday Inquirer Magazine of the Philippine daily Inquirer, 268 575, and the Starweek Magazine of the Philippine Star, 268 000. Among the entertainment magazines, Glitter has the highest number of circulation with 300 000, followed by the Pilipino Reporter News Magazine, 188 192, and the Woman Today, 184 900.

Though the Philippine Collegian retains the singular distinction of being the most illustrious campus paper in the country, there is no single Collegian. A rummage through the archives, through pages crumbling with age, reveals an impermanence of its character.

There are indeed as many versions of the Collegian as there are batches of writers and students, and passing crises peculiar to different times. Each generation names its own foes.

The process of writing, subversive as it is, fords the inter-generational divide. Such exercise puts one upon inquiry, the starting point of advocacy. When one writes, one requires breathing space: the right to dissect any topic under the sun and in the domain of heaven, and the right not to be interfered with in so doing. The practice of interrogating accepted modes of thinking and overturning paradigms breeds criticism of the powers that be.

In the Collegian’s storied past, this criticism, coming at times when to be informed was an offense, was not always welcome. There were issues which came out with white spaces where editorials should have been. Homobono Adaza, then editor in chief (EIC), was removed from office for writing an editorial against the UP Administration. During the Martial Law years, staffers were threatened that they would not graduate if they persisted in attacking the government. The bright lives of some of its editors: Abraham Sarmiento Jr., Antonio Tagamolila, and Enrique Voltaire Garcia III, among a host of others, were snuffed out.

The history of the Collegian is likewise replete with struggles against those who desired to shackle the freedom of writers: the fight against vague provisions on the selection of judges for the editorial exam; the battle to abolish the position of a faculty adviser who had to sign every page proof of the paper; and the endeavor to take care of its own coffers without the Administration holding its finances hostage.

Since the birth of Collegian in 1922, generations of writers have dipped their pens into the inkwell of society racked with vicissitudes. The Collegian was a party in their efforts to resolve the varied inequities of the times with articles that seared, and commentaries that burned. It is imperative that we turn the page to remind us of the efforts of those who came before us.

Perfection lies not behind us, but ahead of us. It is not a forsaken paradise, but a territory we must one day conquer, a city we must one day build. Nevertheless, it is not a mortal sin to occasionally contemplate the cornerstones that have been placed by those before us to show us what is possible.

A History of Journalism in the Philippines. (2016, Jun 08). Retrieved from https://studymoose.com/a-history-of-journalism-in-the-philippines-essay 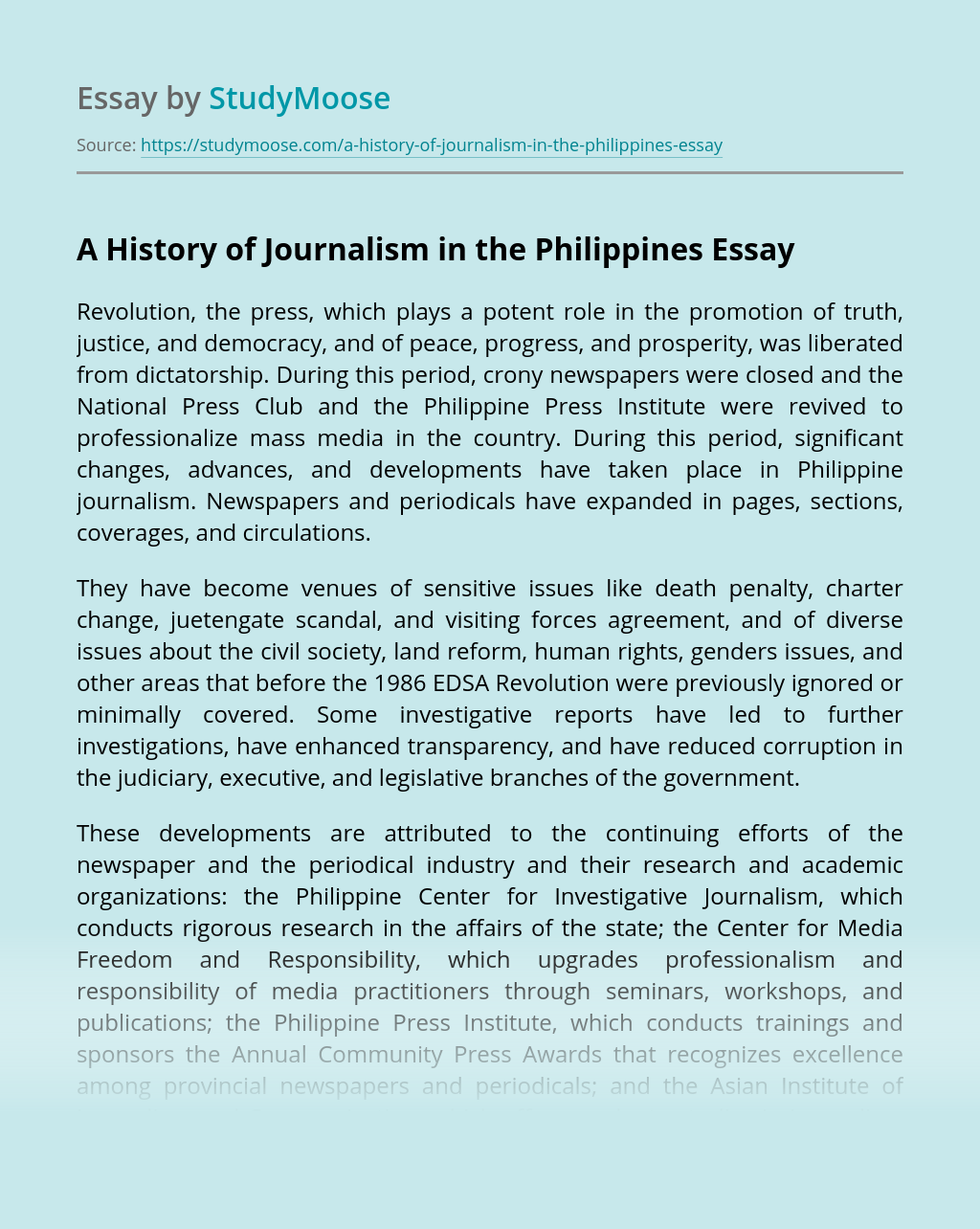 Mass media play a very important role in our everyday life. They serve to inform people of different events that take place or may happen. Also they entertain people or even help to make their life better. But the most important thing that newspapers, radio or TV bring to people is information. The process of...

The Reliability of Newspapers

Introduction Communication refers to the exchange of ideas or information between two or more people. Information composes of voice (e.g. telephone, handy talky etc), data (short message services/SMS, facsimile etc), and video (video streaming, video conference etc). Although the types of information are still the same, their importance always gets stronger eventually. Information is the...

Newspapers and Books Are Outdated

As we move into the twenty- first century an increasing number of people are relying on new forms of technology. A possible consequence of this is that traditional media such as books and newspapers are not just less popular but are considered by some to be outdated. Personally, I disagree with this point of view....