Around fifty years ago, African-American’s sought out for full legal equality, which meant protesting against racial segregation and discrimination. This mass protest movement is known as the Civil Rights Movement. In recent years, there has been protesting, originating in the African-American community, which campaigns against violence and racism towards black people. What originally started out as a hashtag on social media in 2013, #blacklivesmatter quickly stemmed into an internationally known activist movement known as the Black Lives Matter Movement.

Don't use plagiarized sources. Get your custom essay on
“ A comparison of the similarities and differences between the black lives matter movement and the civil rights movement ”
Get custom paper
NEW! smart matching with writer

The tactics used during the Civil Rights Movement differ greatly from the ones used in the Black Lives Matter Movement. The people of the CRM followed the principle of using nonviolence to stop racial discrimination and segregation.

They believed that passive resistance, such as sit-ins and protests, was more powerful than any weapon. Although the BLM is trying to follow the philosophy of non-violent direct action, their protests often are redundant and often result in relatively more violence. The Civil Rights Movement also didn’t have the media in the way that BLM has today. The people of the CRM often had to hope and pray for television and newspaper reporters to publish stories on the events that took place in order to spread the word.

However, the BLM has the ability to use technology in order to reach hundreds of thousands of people through the media. Social media has the ability to reach individuals across the world in milliseconds, which significantly reduces the time it would take to organize a protest.  One of the reasons The Civil Rights Movement and the Black Lives Matter movement vary because of their technological and tactical differences.

Another difference between the two movements includes the different leadership roles. The Civil Rights movement had profound leaders known as civil rights activists, such as Dr. Martin Luther King Jr., Rosa Parks, and Malcolm X. These individuals fought against social injustice and made a lasting impression. These lasting impressions affected an entire country, including international places such as India whose leader was Mahatma Gandhi. Now, in the present day, the leadership roles vary and are often not easily identified. The leaders of the BLM are mainly the mothers and fathers of the fallen men and women who’ve lost their lives to racial injustice. Angels now lead the rebellion to racial freedom, by letting their stories be examples or testimonials of the civil neglect that people of color experience. Ones like Trayvon Martin, Michael Brown, Philando Castile, and many others hold arms in Heaven trying peacefully break down the barriers in which cost them their lives.

Considering The Civil Rights Movement and The Black Lives Matter Movement, the question is often asked what is the overall effectiveness? The Civil Rights Movement’s effectiveness is the reason why children in the present generation may have never experienced racial injustice. The works of Angela Davis, Huey Newton, Medgar Evers, and many more will never go in vain. Their works and compassion for a world of souls transformed a country who was responsible for the depreciation of people of color, into a world of possibility and gave freedom a new definition. Freedom was translated into being a mental state, and not just a physical state. Kids around the world could eat with those of different ethnicity than them. The hard-working mother of 4 children, whose father worked at a mill day in and day out, can now send her children to a school that welcomes her children, giving them the wings that education can give them to fly, and reach heights that the once sharecropper or enslaved man and woman could not have. The freedom to walk on the same street and to sit at the front of public transportation are allowed to these activists. They are our forefathers, along with Harriet Tubman, Fredrick Douglass, and Hannah More who worked to end slavery built a platform from the dust of their hands and made an empire that would house freedom, equality, and justice for all.

The overall effectiveness of the Black Lives Matter Movement is still a work in progress. With the many killings of African American’s in the past 3 years, it feels as if the fight that one’s thought was once over are now opening up the graves, and digging out the old souls of the unredeemed. As the people of the present day generation move with this particular movement, the feeling of confliction settles within the movement as well, by the increase in violence by the same race that is asking for justice. As one can reflect on The Civil Rights Movement, the tactics were organized, and peaceful. Today’s tactics like a protest and marches start off peaceful but result in bloodbaths. For example, the protest in Dallas resulted in police officers killed by a single African American man who believed he had, had enough of the constant mistreatment of his people of color. Dr. Martin Luther King Jr. asked his followers to not fight with their hands, but with their words. Heart and mind was the epitome of his teachings, something that seems to be lost in the current movement of today’s society. The organization of the present makes it hard for the opposite races to understand the position in which African American’s hold. When violence erupts and the initial reason was for it to be stopped, it takes the intelligence out of the equation and replaces ignorance. In my opinion, this movement is needed but can be thought out and planned just like our forefathers did. The Black Panther Party were not just people who terrorized others and their own communities. They had educational programs for the youth, meals for the unfortunate; they understood the concept of working for something to not only help themselves but the ones that they could not see as well. The Black Lives Matter Movement’s overall effectiveness is one that is not fully cohesive but is to not be counted out. They will rise and cause awareness, because “If you’ve never been down, how you ever gonna get back up?” James Brown.

The Civil Rights Movement and The Black Lives Matter Movement are different in many ways. Maybe it’s because of the time period or maybe because the different tactics used and leadership. These may all be factors of why these two differ greatly, but one thing that does not differ is their purpose. The purpose of these movements is to bring forth racial equality, and racial freedom to all no matter what their ethnicity. Equality is something that has been fought for, for over 50 years, and will not die until the world is a happy melting pot filled with different colors who come together voluntarily to help each other and to be one.

A comparison of the similarities and differences between the black lives matter movement and the civil rights movement. (2018, Apr 13). Retrieved from https://studymoose.com/a-comparison-of-the-similarities-and-differences-between-the-black-lives-matter-movement-and-the-civil-rights-movement-essay 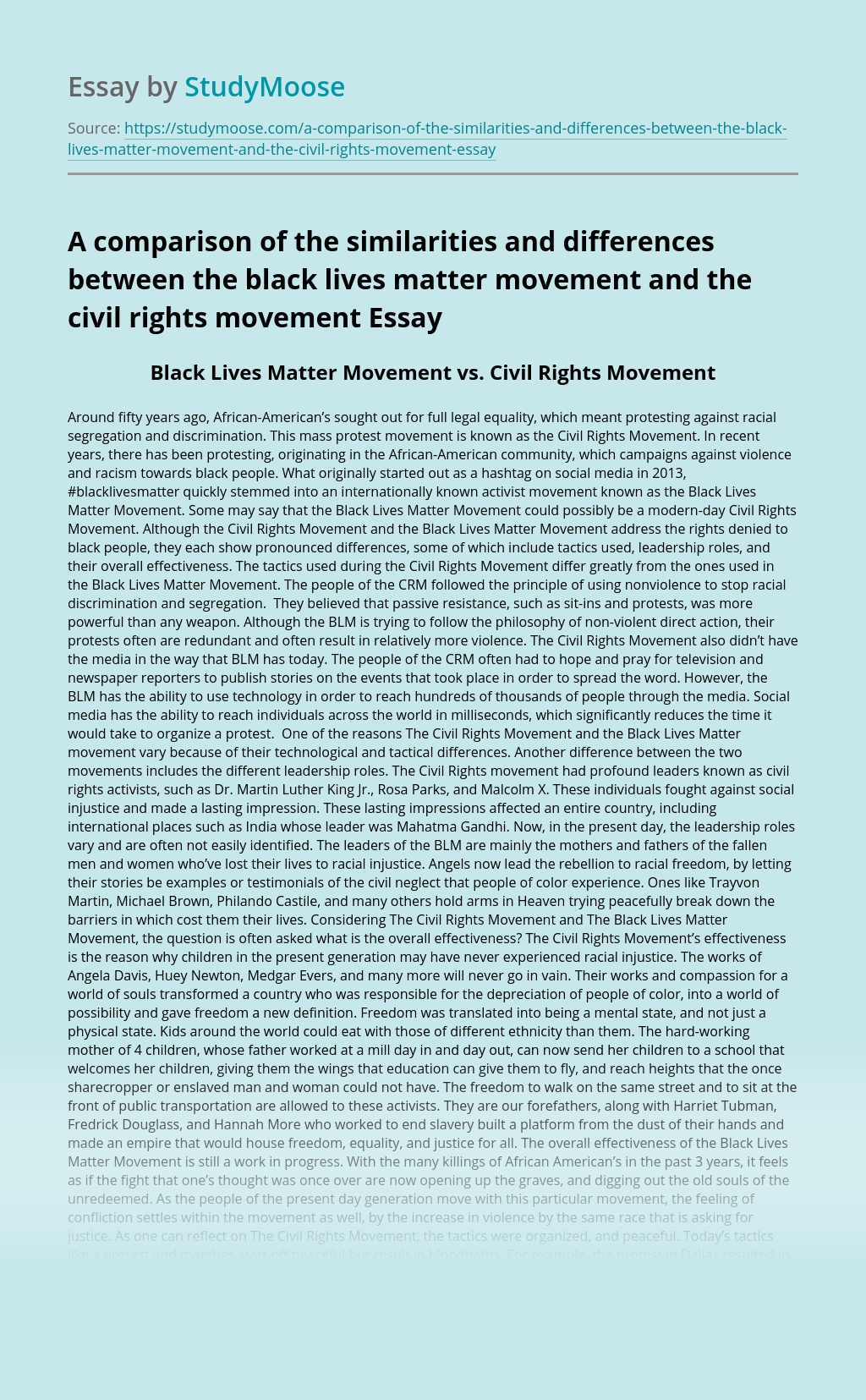