A Clean And Healthy Environment

A clean and healthy environment is part and parcel of the wealth and quality of life that we desire for ourselves now and for our children in the future. People demand that the air they breathe, the water they drink, and the food they eat is free of pollution and contaminants; they want to live undisturbed by noise, and they want to enjoy the beauty of the countryside, unspoiled coastlines and mountain areas. They also want a world that is not threatened by climate change.

Don't use plagiarized sources. Get your custom essay on
“ A Clean And Healthy Environment ”
Get custom paper
NEW! smart matching with writer

Healthy and balanced natural systems are essential for supporting life on this planet. Society relies on nature to provide us with the resources for our survival: air, water, food, fibers, medicines, and building materials. Children need to grow up aware of the nature around them. As human beings we have a responsibility to preserve the actual value of nature both for ourselves and for future generations.

The Impact of Pollution on Quality of Life

This ranges from increased allergies, respiratory disease, and cancers to the disorder of the body’s hormone and fertility systems, and premature death. The causes of our various environment-health problems are numerous and include pollution from transport, agricultural activities, industrial processes, domestic waste matter and waste management. The scientific researches, conducted over centuries, show that the pollution of the atmosphere reached its top.

The contaminants in the air have a negative impact on the health of children, as well as adults. Our respiratory organs, our vision, and our hearing are damaged because of the high amounts of contaminants in the air, water, and soil. A substantial number of people have conditions such as asthma, other respiratory problems or difficulties with additional organs of the body.

Global warming is the increase of Earth’s average surface temperature due to effect of greenhouse gases, such as carbon dioxide emissions from burning fossil fuels or from deforestation, which trap heat that would otherwise escape from Earth. This is a type of greenhouse effect.

Climate change is a significant and lasting change in the statistical distribution of weather patterns over periods ranging from decades to millions of years. Global climate change will affect people and the environment in many ways. Some of these impacts, like stronger hurricanes and severe heat waves, could be life threatening. Others, like spreading weeds, will be less serious. And some effects, like longer growing seasons for crops, might even be good! However, as the Earth keeps getting warmer, the negative effects are expected to outweigh the positive ones.

Nowadays, increasing a number of people concern about environment protection. However, whether the responsibility of protecting our environment is supposed to be taken by governments has become a controversial issue. I am going to discuss this topic and present my viewpoint.

First of all, governments should educate resident’s awareness of the environmental pollution issues and make every effort to keep our city clean and safe. For example, people should sort rubbish for recycling daily and when they go shopping use green bags instead of plastic bags because this will reduce plastic waste and protect our land and trees. Also, government should encourage people reducing their dependence on private cars and using public transports and riding bicycles more often. By doing so, this will not only decrease the emission of carbon dioxide from cars and will but also reduce traffic jams and accidents on the road and decrease air pollution.

Each and everyone of us should be aware of what is happening in our environment. We could reach out to people who don’t care about our surroundings and we could change their negative attitudes to positive ones in creating a better place for us to live in. I guess, by becoming more environmentally aware we can minimize the detrimental effect we have on our world by keeping ourselves fully informed about the bad effects of these environmental issues such as- ozone depletion, greenhouse effect, global warming, and climate change.

To sum up, creating a clean and ideal earth should depend on us making effort on it. The responsibility of environmental protect should be shared between individual and governments. We cannot put all responsibility for protecting the environment on to governments. If everyone can change their habits, the day when people live in a both materially and ecologically balanced environment is not far.

A Clean And Healthy Environment. (2016, Jun 03). Retrieved from http://studymoose.com/a-clean-and-healthy-environment-essay 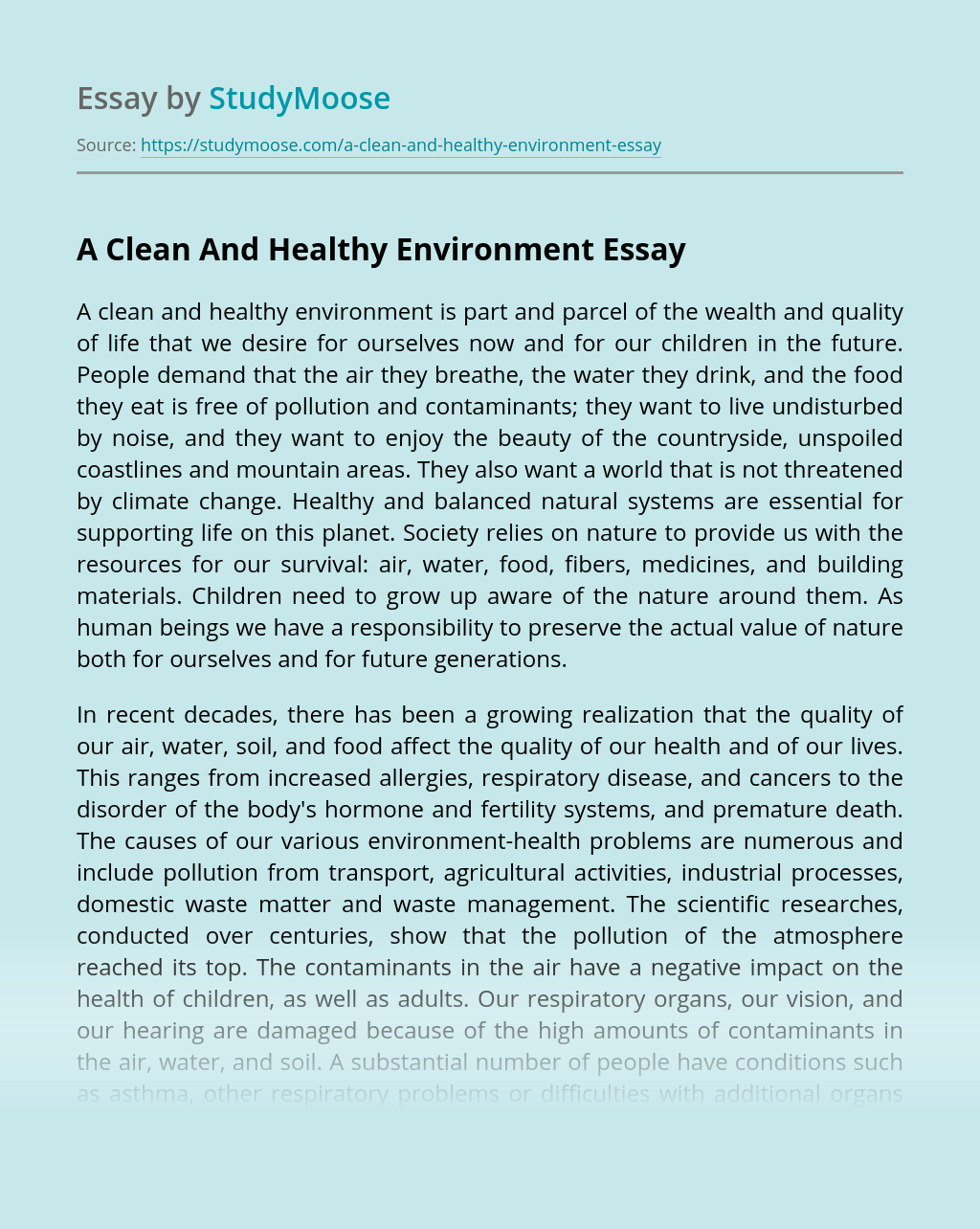