A Child Marriage: Cause and Effect

Don't use plagiarized sources. Get your custom essay on
“ A Child Marriage: Cause and Effect ”
Get custom paper
NEW! smart matching with writer

Marriage before the age of 18 years has a big problem and a big challenge especially for the young girl because they can’t complete the education, they get hurt during pregnancy, and when they get birth even might cause them to die. Child marriages are common in many cultures, and child marriage can be arranged by parents, and that marriage can be arranged at any age.

The emotional and social effects of early marriage are varied, but one of the most common outcomes is the withdrawal of girls from formal education. When a girl reaches the age around ten, her parents have already arranged a wedding for her and have taken her out of school to prepare the girl to be wed and to have children. At the age of ten a girl is not fully matured, nor is she well educated. Education is one of the largest losses to a girl if she is married young.

Not having a full education like other children brings many hardships to the girl.

In child marriage, the girl is getting a problem through the early age marriage which affects the girl’s education. Early age marriage makes completing education almost impossible for girls. The relationship between child marriage and educational attainment for girls is also strong. In most developing countries, it is extremely difficult for girls to remain in school once they get married. To marry early is likely to be determined by the girl’s education potential. For example, Girls with lower education potential may be weaker academically expected fewer earnings in the future and thereby have lower incentives to continue to study as compared to girls who are academically stronger. These girls may be more willing to marry early, or their parents may be more inclined to have them marry early. Similarly, independently of their academic abilities, girls less interested in pursuing their education may also marry earlier and might have dropped out of school even in the absence of marriage.

In child marriage, not only does a girl lose her education but she also experiences an emotional adversity health problem during early age Pregnancy. Pregnancy is one of the early marriage problems in my country. To be a mother is a big responsibility that a mother should give priority for her child, but how can the young woman manage this big responsibility as she is too young to be a mother, so to take care of a child it needs a lot of patient and sacrifices. The risk of pregnancy among young women becomes higher. Some young women who get pregnant early may experience stress and worry much about the pregnancy that happened for her and also face depression. Some of the causes of early pregnancy among young age are lack of education especially sexual education, Lack of education among young age should be given priority. In my opinion, sexual education should be learned in school because most of the time the husbands are often considerably older and have more sexual experience so that education can be one of the most powerful tools to enable girls to avoid child marriage and fulfill their potential. The longer a girl stays in school, the less likely she is to be married before the age of 18 and have children during her teenage years.

Child marriage has another effect that can cause a lot of endless problems in the life of the child, especially for young girls. In a child marriage, they are more likely to experience frequent and early pregnancies which may cause a range of health complications and, in some cases, after health problems they face higher risks of death in childbirth as well as for the newborn children.

In the child marriage, one of the effect in most marriages is it doesn’t always last, they do end in divorce. Some of the most leading causes in divorce are lack of foundation and lack of communication. Why would you want to get married to someone that you have nothing in common with but in this case most of the early age marriages are that arranging by the family that’s why most of them they don’t know each other so that they can’t share information they don’t have enough communication and may the girl doesn’t have life experience, or beliefs. When they enter into marriage, can’t sharing some of the same interest and passions can be important. If it is a marriage expected last if the couple doesn’t know each other and share any experience, beliefs, passions, values, or expectations so that cause they will separate. Just what would the foundation of their marital relationship? Another common cause of divorce is lack of communication. Lots of couples lack communication when it comes to making decisions. When couples are able to talk, they are most likely to solve their problems. Disagreements due to lack of communication can often lead to arguments. Not being able to communicate can also cause financial problems and finally divorce.

At an early age, marriage has a problem after getting a divorce. Communication is very important when there are children involved. Failure to communicate can lead to behavioral problems in children. At times like these children like to manipulate their parents. Communication is the key to any relationship, not just in martial. Make sure to avoid having a marriage end in divorce. Be sure the relationship is being built on a solid foundation. There’s no need to rush into a marriage, make sure you both are ready. Talk about any and all problems you might be having, always keep the line of communication open. Finally, early marriage ruins a young girl’s life in particular and her kids’ future and the community in general.

A Child Marriage: Cause and Effect. (2020, Sep 09). Retrieved from https://studymoose.com/a-child-marriage-cause-and-effect-essay 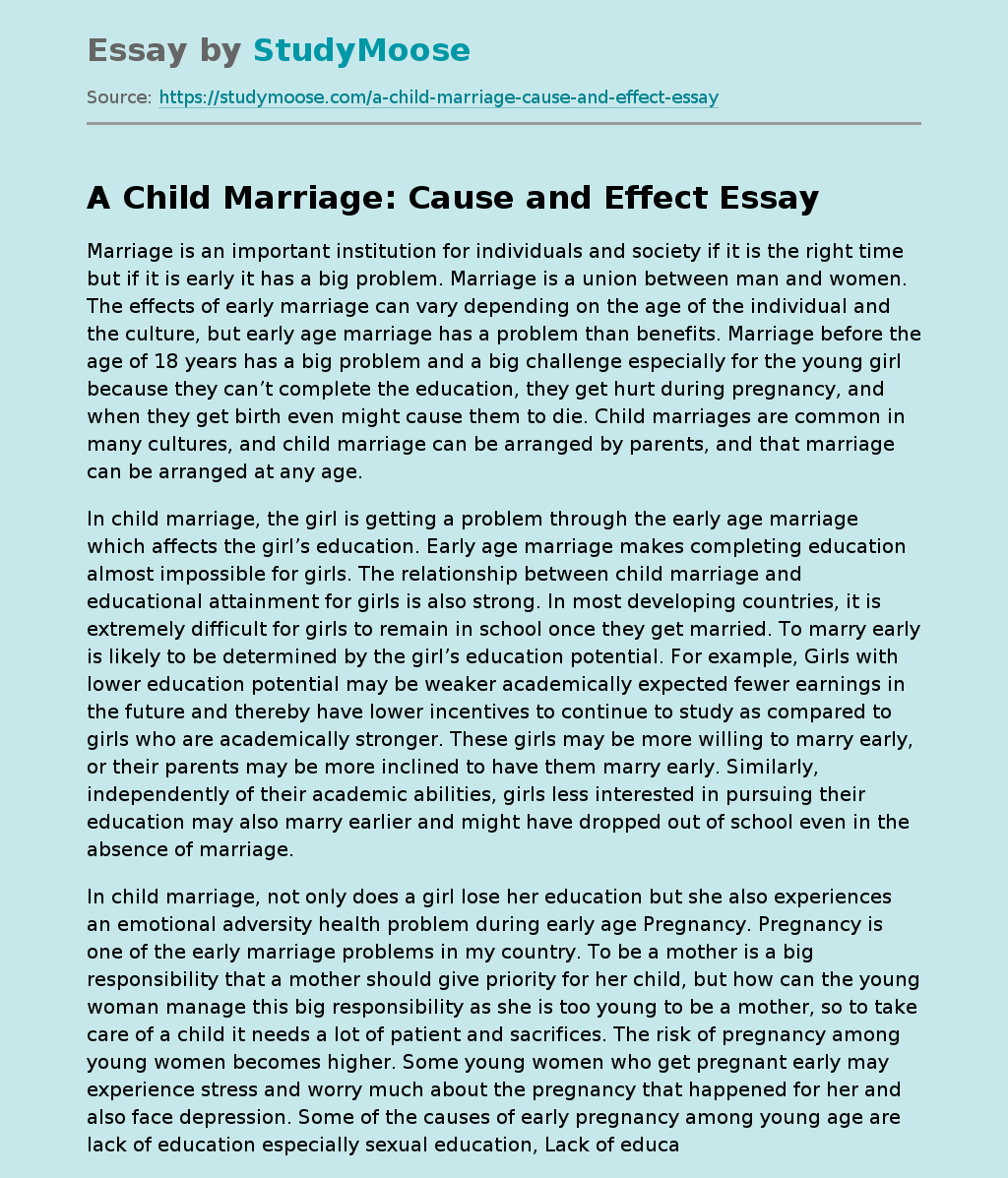