Virtual reality has promise for nearly every industry ranging from architecture and design to movies and entertainment, but the real industry to gain from this technology is science in general. The money that can be saved examining the probability of experiments in an artificial world before they are actually carried out could be great, and the money saved on energy could be even greater. Virtual reality is something that personally excites me because uses and benefits of it are never ending.

Don't use plagiarized sources. Get your custom essay on
“ 3D, Virtual Reality and Entertainment Industry ”
Get custom paper
NEW! smart matching with writer

The best example of how virtual reality can help science is that of the ‘molecular docking’ experiments being done in Chapel Hill, North Carolina. Scientists at the University of North Carolina have developed a system that simulated the bonding of molecules. However, instead of using complicated formulas to determine bonding energy or stick drawings, the chemist can use a high-tech head-mounted display. With this they attach their bodies to an artificial arm from the ceiling. This system is so easy to operate that children could learn to form bonds using a trial and error method.

In another field, architectural designers have also found that virtual reality can be useful in visualizing what their buildings will look like when they are put together. Often, using a 2D diagram to represent a 3D home is confusing, and the people that fund large projects would like to be able to see what they are paying for before it is constructed. An example, which is fascinating, would be that of designing an elementary school.

Designers could walk in the school from a child’s perspective to gain insight on how high a water fountain is, or how narrow the halls are.

Product designers could also use virtual reality in similar ways to test their products. NASA and other aerospace facilities are concentrating research on such things as human factors engineering, virtual prototyping of buildings and military devices, aerodynamic analysis, flight simulation, 3D data visualization, satellite position fixing, and planetary exploration simulations. Such things as virtual wind tunnels have been in development for a couple years and could save money and energy for aerospace companies.

However, in the medical field researchers have been using virtual reality techniques to synthesize diagnostic images of a patient’s body to do ‘predictive’ modeling of radiation treatment using images created by ultrasound, magnetic resonance imaging, and X- ray. A radiation therapist in a virtual world could view and expose a tumor at any angle and then model specific doses and configurations of radiation beams to aim at the tumor more effectively. Since radiation destroys human tissue easily, there is no allowance for error. Also, doctors could use ‘virtual cadavers’ to practice rare operations which are tough to perform. This is an excellent use because one could perform the operation over and over without the worry of hurting people. However, this sort of practice may have its limitations because of the fact that it is only a virtual world. In addition, the computer user interfaces are not well enough developed and it is estimated that it will take five to ten years to develop this technology.

Nonetheless, a company in Japan called Matsushita Electric World LTD is using virtual reality to sell their products. They employ a virtual reality research head-mounted display linked to a high-powered computer to help prospective customers design their own kitchens. Being able to see what your kitchen will look like before you actually refurnish could help you save from costly mistakes in the future.

My uncle, Jan Holliday, has a virtual reality company data library . At his electronic design company, the company stores all of its data in 3D, virtual reality form on a computer. This makes the data more easily accessible by the employees of the company and they can find data in a library type setting by using virtual reality. It also makes the company information more organized and puts it in one designated area instead of spread throughout a library.

The entertainment industry also stands to gain a lot from virtual reality as well. Universal Studios, among others, is developing a virtual reality amusement park which will incorporate virtual reality games and other new technology. Another virtual theme park, Atlantis Cyberspace, is opening soon. It will incorporate entertainment with education. The virtual theme park will also use state of the art virtual reality. The park will have two player games in which players challenge each other. It will also let customers swim like dolphins, and let buyers play with virtual waterbeds and hydraulic units. As it stands, almost every industry has something to gain from virtual reality and in the years to come, it appears that the possibilities are endless. Virtual reality is both easy and fun to use, and it’s something that almost anybody at any age can operate. 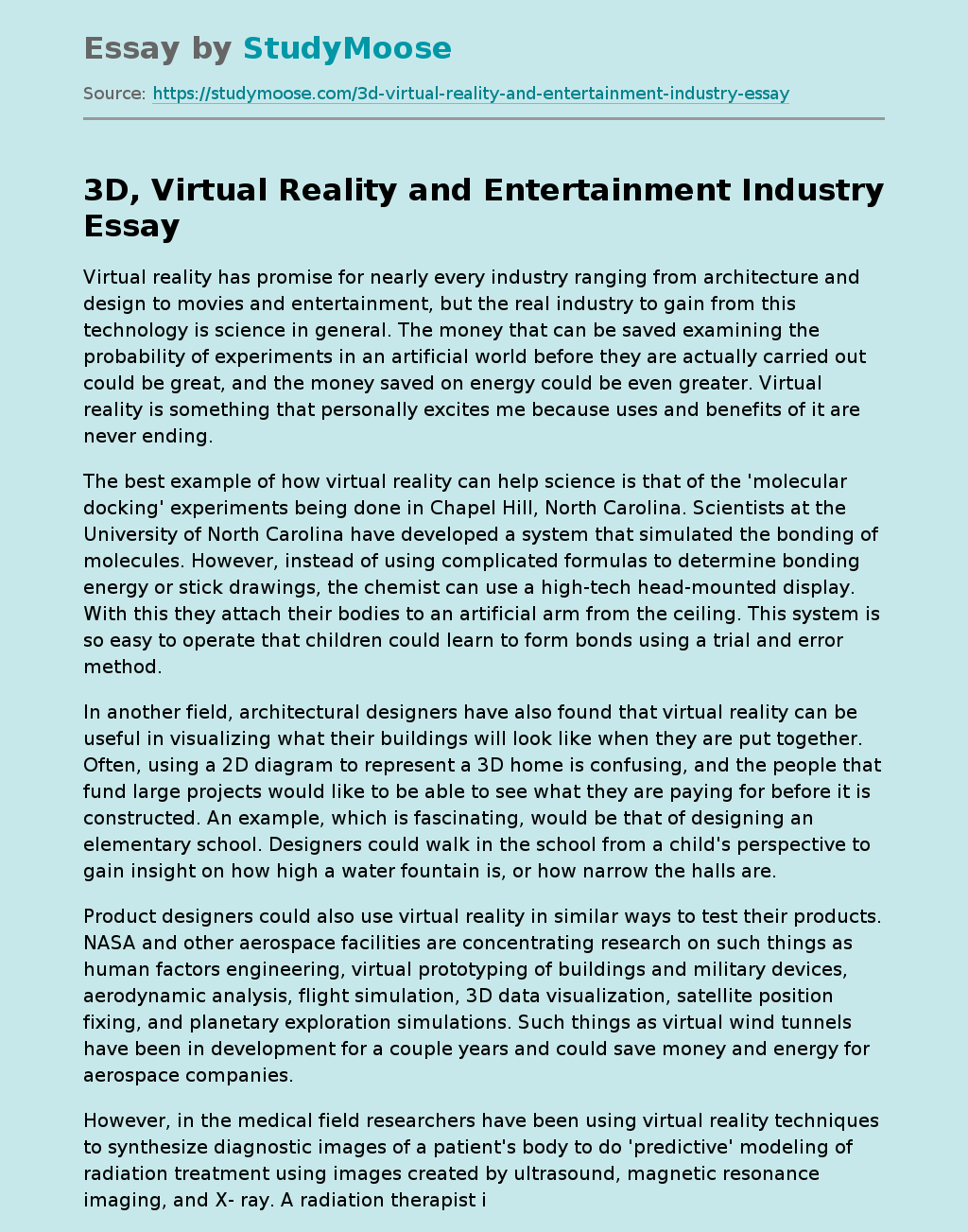