In this essay, I am going to compare and contrast three significant events in the film of 300. First, I will discuss the events leading up to the historical battle at Thermopylae. Then, I will compare the movie version battles at Thermopylae with historical accounts. Finally, I will contrast events after Thermopylae between the movie and actual history.

As I recall, when I saw the movie several months ago (it’s not available for reviewing again from Blockbuster until July 31, 2007), the most significant event before the great battle was the visit of the Persian diplomats to King Leonidas offering him and his family great wealth and position with no one getting killed in a needless war, if he would only submit to Xerxes as ruler of a new Persian-Grecian Empire.

Don't use plagiarized sources. Get your custom essay on
“ “300” Compare/Contrast Essay ”
Get custom paper
NEW! smart matching with writer

When Leonidas and his outspoken wife asked them about the preservation of the Greek way of life, that is, freedom and democracy, the offer quickly turned into a threat, the threat of total destruction for Greek culture and a life of slavery for any Greek survivors.

When the diplomats scolded the wife of Leonidas for interrupting their “man-to-man” talk with her criticisms, Leonidas became so furious that these strangers came into a king’s home, insulted his queen, that he threw them down to their death in a large, very, very deep well.

There is no historical account that this is the way it really happened. But I think is was probably a good guess by Hollywood how negotiations may have gone except for the killings.

I believe that was Hollywood overkill. It is historical fact that the Spartan woman was the most highly respected, independent woman in all the Greek city-states, but diplomats do not usually get murdered over verbal disagreements. After all, they only carry the message. They do not make policy. If these messengers don’t come back alive, they won’t be sent. They were a very important means of communication between armies in those days. In most cases, just the presence of the Persian million-man army scared the invaded city or country into surrendering or face certain defeat from so many soldiers.

The basic movie is about two opposing armies, the Persians against the Greeks (led by 300 Spartans), meeting at the pass at Thermopylae to determine whether Greece would survive as the only democracy on earth or be conquered by the great Persian Empire expanding into Europe. On the Persian side, their army had hundreds of thousands of soldiers ready to fight. On the Greek side, they only had approximately 1500 to defend the pass but, only when Leonidas knew for sure that he would be surrounded and that defeat was likely, he sent them all back to safety except for himself and 300 of his best Spartan warriors to defend the pass and slow down the Persian invasion while other Greek armies were being organized. I believe that this movie is quite accurate according to the historical events that took place during the time of 480 B.C. However, I think some events in the movie are not accurate such as all of those mystical-looking creatures that supposedly existed back then and used in times of war.

This was bordering more on fantasy to make the movie more appealing to a younger audience instead of just those who follow history. The part of the movie which I think is accurate is Sparta’s army being very strong and disciplined. The Spartans had a good strong leader in Leonidas, constant combat training since they were children, and had superior weapons that were a part of them. The Persians, on the other hand, had many soldiers but there weapons and lack of armor were lighter because of the long distances the Persians had to travel to get to Greece.

The movie showed the Spartans to have superior weaponry such as longer spears to resist charges, shorter swords for quick strokes during close-in combat to cut through Persian wicker-type shields, larger metal shields to deflect sword and arrow attacks. This is very accurate, historically. The movie also showed the Spartans to be very muscular and in top physical shape. Again, this is true because the Spartan child (if he was not abandoned in the hillside for being physically defective at birth) would be taken from his home at the age of seven to lead a very hard, military lifestyle until he was tweny-one years old, at which time he would go into the army as a fully trained soldier ready to do battle for the glory of Sparta.

I think the movie was pretty much basically over after the battle of Thermopylae was done but, historically, this battle, even though it was a loss, was only the beginning of the Greek victory over Persia. Once word got back to other Greek city-states, it so inspired them to unite as one Greek nation to defend their freedom and culture as the Spartans had defended it, to the death. The Athenian navy finished off the Persian navy at the  of Salamis and destroyed the only way the Persians could have supplied their army if Persia was to hold conquered territory. 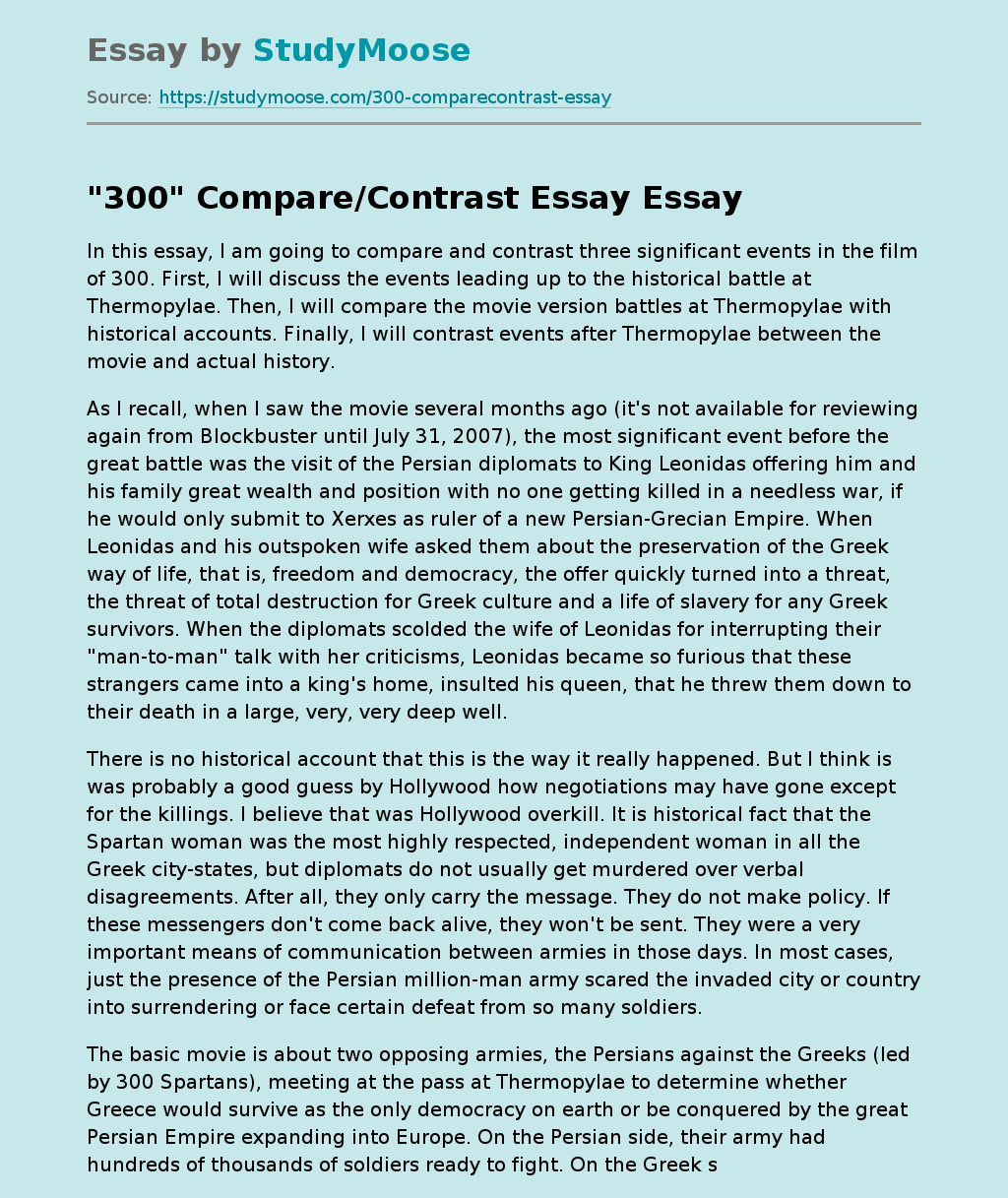