3 Idiots is a bollywood film that released worldwide on 25th December 2009. It was produced by Vidhu Vinod Chopra and directed by Rajkumar Hirani. The film has three actors playing the lead roles, hence the film is named 3 Idiots. The three lead actors are: Aamir Khan, Sharman Joshi and R Madhavan. These three are the brilliant students of their respective high schools. While Boman Irani portrays the role of the college director of the college which these three students join after graduating from their high schools.

Don't use plagiarized sources.
Get Your Custom Essay on 3 Idiots Just from $13,9/Page

Also, there is a small role played by Kareena Kapoor. She is the leading lady of the film and plays the role of the director’s daughter.

The film displays the importance of learning and education in our lives. The film deals with the education system in India and how the students are unable to cope up to the pressure because of the excessive amounts of exams and assignments. 3 Idiots is a story of three bright students who have acquired a GPA of 10.

00 (on a scale of 10.00) in their high schools. They enter the most prestigious college for engineering in India: The Imperial College of Engineering. Rancho is a character played by Aamir Khan. He loves machines and that is the reason he wants to pursue mechanical engineering. Raju, the character played by Sharman Joshi doesn’t live life to the fullest. He is scared of the assignments and exams. He wants to work very hard and get a good job as he comes from a poor family and he is the only one to support his family. Farhan is the name of the character played by R Madhavan. Farhan wants to be a wildlife photographer but he joins the college of engineering because his father wants him to be a mechanical engineering as he has very good grades in his school. While Viru Sahastrabuddhe is the director of the college which is played by Boman Irani. Viru is a very strict professor and maintains his pressure upon his students. There is an incident in the film which shows that a student commits suicide because he doesn’t provide sufficient time to him for completing the project.

The students are unable to take such pressure and they believe that it’s time for them to end their life. This is a true situation and such pressure exists in most of the colleges in India. Rancho loves engineering so he doesn’t have problems with the exams and assignments. While Raju and Farhan are unable to get good grades as they feel the pressure of the education system. Rancho asks Farhan to change his field of study from engineering to wildlife photography as Farhan always wanted to become a wildlife photographer. He advises Raju to put away his fear and it would help him to succeed in his exams. In the third year of engineering recruiters hire students. Viru says that Raju and Farhan would only be able to get the jobs only when they pass with good grades in the final exam. To purposely fail them he sets the paper himself, increasing the difficulty level. Viru’s daughter Pia comes to know about this, so she informs Rancho. Rancho tries to steal the paper and is caught by the director.

He decided to rusticate all the three for their act. Pia informs his father about the real reason that took her brother’s life. Viru thought that his son had died in a car accident but later he comes to know that he committed suicide as he didn’t want to pursue engineering. He was forced by his father to become an engineer while he wanted to study literature. This is the reason why he committed suicide. Knowing this truth he decides not to rusticate the three students. This film is based on a novel by Chetan Bhagat titled Five Point Someone- What Not To Do At IIT. Bhagat’s novel also involves the same three lead characters but with different names. The title of the novel “Five Point Someone” is based on the five point scale which is used to calculate the GPA at the Indian Institute of Technology. Chetan Bhagat is being regarded as the ‘biggest selling English author in India’s history’ (Chandrakar). Chetan Bhagat feels very proud that his book and his message have received a wider audience because of the film. People nowadays are less likely to read a book. So, the message of the author is spread throughout the world where the film would be released. Chetan Bhagat is a prominent Indian writer who has written several other bestselling novels such as 2 States, One Night at a Call Center and 3 Mistakes of My Life.

All of these are being made into different movies. The film 3 Idiots finely portrays the education system of India by showing exactly what happens with the students of a particular engineering college. Students have to cope up with high amounts of pressure to pass the exams. Committing suicide is not a solution to the problem, but fighting against the system to improve it can solve the problem to a certain extent. This film shows that Rancho argues with the director to make him understand that the way of teaching is incorrect and he blames the system for this. During an academic year students have several exams to take which involves vast syllabuses and also projects need to be completed within a short span of time. The film also motivates people to study what they like and not what their parents would ask them to. The director of the film makes an effort to display the critical condition of the education system of India in the form of a brilliant movie which is entertaining and also sends an important message out to the viewers. 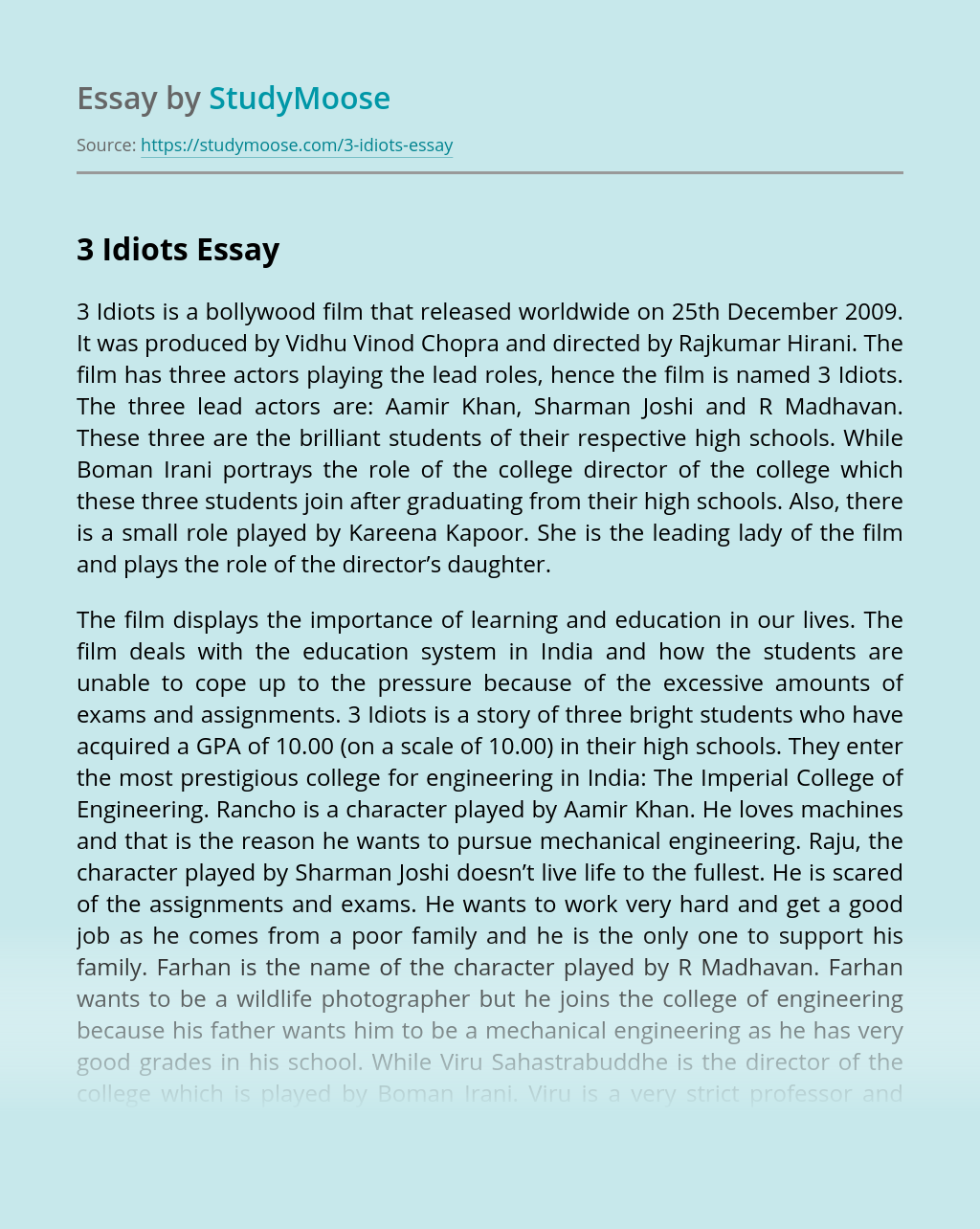 Hostel life is not without its disadvantages. The rich students get sufficient money from their parents and therefore spend lavishly. The poor boarders also urge their parents to increase their monthly allowance and spend their hard earned money on luxuries. The company of the rich also makes them pick up their bad habits. They start...

The Day My Life Changed Forever

I believe it is a severe tragedy that children’s pastimes have changed drastically today from what they were years ago: from riding bikes, playing house, and having imaginary friends to texting, playing video games, and listening to mp3 players. When I was young, children learned to use imagination, self-entertain, and willingly respect their elders. I...

Get Essay
Childcare working in partnerships

My advertisement for the Chanel fragrance from the Chance series called Eau Tendre uses a naked woman with pink flowers wrapped around her body, a huge pink bottle. The ad says, “IT’S YOUR CHANCE. EMBRACE IT. ” to persuade women to buy this product because it will make you feel confident and comfortable. The ad...

Race and Ethnicity in Noel and Blauner Hypothesis

Disucussion on the Noel and Blauner Hypotheses When two distinct groups first come into contact with each other, the conditions of that meeting can determine the fate and mold the relations of the two groups for generations. This is called the “Contact Situation.” Donald Noel and Robert Blauner have analyzed this initial contact and developed...