Your name, where you grew up, your hair, your skin color, these are all things that we had no control over and no say in whatsoever, so why do these things hold such power in how people are viewed? All of these things I previously listed come into play when people are looking to hire employees but more times than not these uncontrollable little factors can be the reason you don’t get the job. The sad truth is that it’s mostly colored folks who are looked over for things as simplistic as an afro or dreads being viewed as unprofessional.

Don't use plagiarized sources. Get your custom essay on
“ Your name where you grew up your hair your skin color these ”
Get custom paper
NEW! smart matching with writer

On the other hand, there are things like affirmative action guaranteeing colored people a working place but more times than not it’s not an equal place. In this essay, we will further investigate how this racism that people thought to of left along with the ’60s is still thriving hidden in society today specifically the aspect of employment.

All of the resumes were alike in skill set and should have provided equal results for the people without a criminal record however, this was not the case; 34% of the white people without a record were called back and 17% of the white people with a record were called back but the shocking part of this study was that only 14% of the back people without a record where called back Price (2003). ” Some people might object that because this study was done in just one city it cannot represent the nation as a whole, there is no reason to believe, however, that employers in Milwaukee are more likely to discriminate than employers in the rest of the country” Price (2003). Now does it make sense to you that a person with a criminal record had a better chance of getting a job than a colored person without one?

Workplace discrimination is not limited to the basic black and white when I use the term colored I’m writing on behalf of all of the colored people who are discriminated against because of the fact that they are colored. As Hernandez (2010) mentions in her article Employment Discrimination In The Ethnically Diverse Workplace In Latin America, the Caribbean and the United States, lighter skin and European features can increase one’s chances for socioeconomic advancement, while darker skin and African American or indigenous features may limit opportunities for social mobility. That right there is an example of still existing racism in today’s employment by focusing on feature instead of the employees work ethic and skill set not only are you contributing to racism you are possibly losing an incredible employee. Another powerful point stated by Hernandez (2010) is ” Workplace diversity has been viewed as a something of a safe harbor from charges of discrimination. Now diversity alone cannot and will not end racism but what it will do is provide colored folks who have been unfairly passed for a job support their families.

In the article Modern-Day racism in the workplace: Symbolic diversity or real change? By Ashly Williams, an example of workplace discrimination in the coca-cola industry is brought up and investigated. Williams (2015) stated that “A number of accusations pertaining to a discriminatory work environment were made against the company including inequities in promotional advancement, punitive and retaliatory actions against minorities, and disproportionate dispersion of overtime hours”. The shocking part is that the racial slurs and discrimination they were facing was going unnoticed and even unpunished. In a recent study, it was found that over a two week time period 78% of the Asian participants experienced a microaggression which is commonplace verbal or behavioral indignities, whether intentional or unintentional, which communicates hostile, derogatory, or negative racial slights and insults. More times than not people don’t even realize that they’re being racist due to how normalized these hidden or discrete acts of racism became in today’s society. Microaggressions are often experienced in the workplace and are sometimes referred to as “old fashioned racism” some examples of microaggressions are saying things like “where are you really from”, “What are you”, “you’re pretty for a black girl” and there are many more. Another form of a microaggression is a microinsult which a more upfront verbal and nonverbal communication that often deals with people who lack sympathy and jump to conclusions when seeing and or dealing with situations that minorities are dealing with or in. A very good example of a microinsult presented by Hernandez (2010)was “For example, when an African American employee is promoted within an organization, other employees often believe that the promotion was based upon Affirmative Action rather than intelligence or competency. Employees that then approach the newly promoted individual and question how the job was acquisitioned would be insulting the minority colleague by implying that the promotion was due to something other than intelligence or competency”. This is a great example to refer to because in this we are exposed to 1) how racism can be a problem in employee to employee situations and 2) how there is a common view that affirmative action is a reason for promotions and being hired or even successful. I’d like to broaden my previous statement on affirmative action by adding that this view directly connects to a racist stereotype that minorities, mainly African Americans are not qualified, smart, educated, or equipt enough to do and be hired for the same kind of work that is being done by whites.

In conclusion, I would like to briefly restate my research on racism in the workplace today. Many groups not only African Americans are faced with racism that can be tiring on the body and soul. Very many African Americans are looked over for jobs simply because of their skin, even when their competitor has a criminal record. It is not only bosses but also other employees contributing to the racism and boss who are tasked with creating a safe work environment but overlook the clear racism and mistreatment. Also, microaggressions, microinsults and stereotyping are contributing tons to this racism in the workplace. So as I close my essay I would like to ask your hair, your skin, your religion, your hometown, even your name, should they dictate whether you are educated enough for a job? Should they give people a reason to overlook you just for these simple uncontrollable aspects of yourself? Should they hold the immense power that they do in today’s employment system? The answer to all of these should be no but sadly this is what is happening with minorities.

Your name where you grew up your hair your skin color these. (2019, Nov 29). Retrieved from https://studymoose.com/your-name-where-you-grew-up-your-hair-your-skin-color-these-example-essay 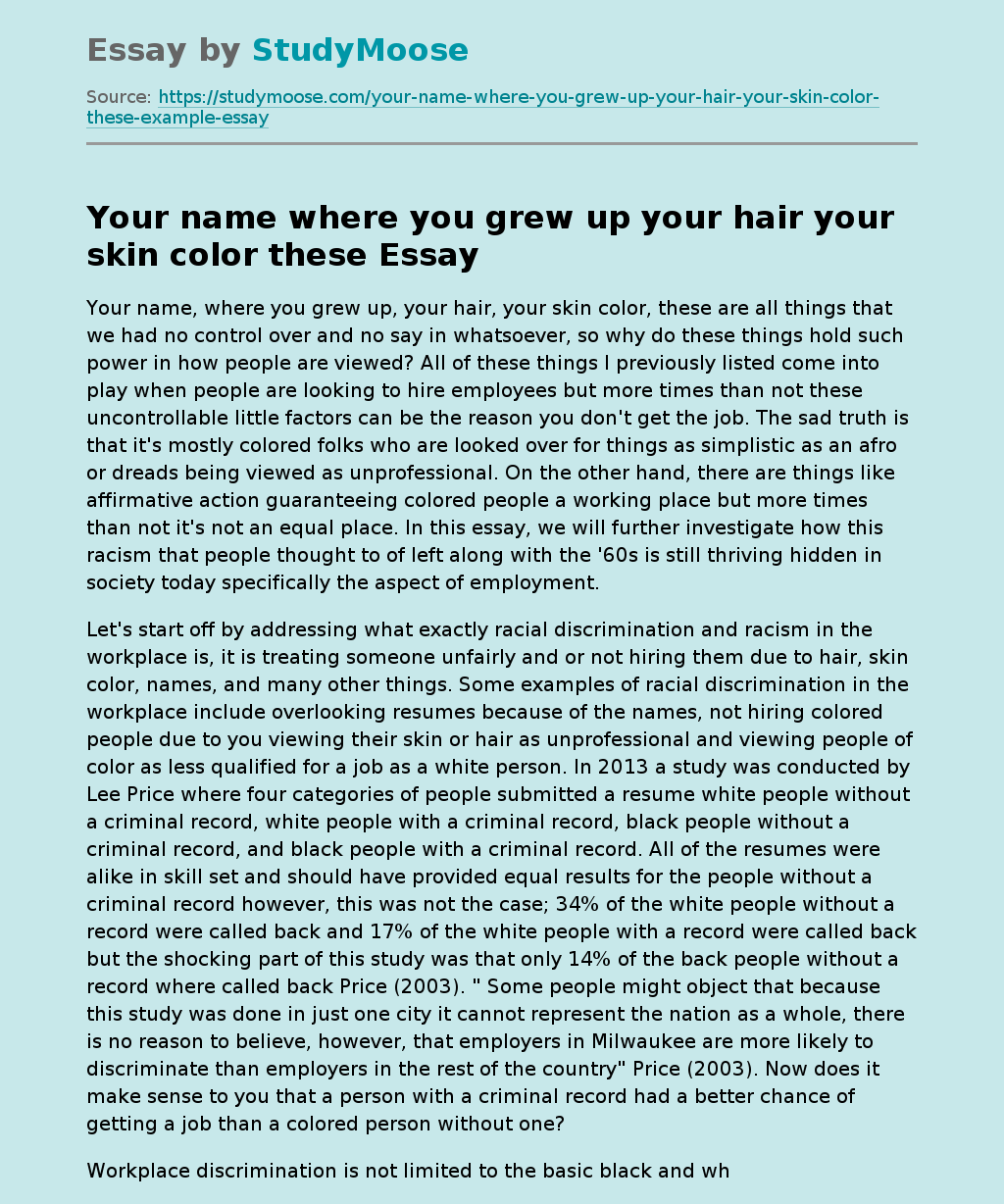