In the late 1980s, WVI reacted to this pressure from the field in 2 ways. Initially, WVI altered the configuration of its governance structure. Council membership was broadened to include all World Vision partner countries, consisting of developing nations. Likewise, WVI started to base eligibility for worldwide board membership on a representative system of five classifications of member nations. (Karen, 1999).

As a non-for-profit company, WVI has its specific objective and creed, which are supported by Christianity worths.

This makes it really different from enterprises on operations and management. However, as a big company operated in various countries all over the world, what WVI is doing share lots of similarities with the regular companies in the competitive environment. Concerns on management, human resources and financing will likewise have determinate influence on the short-term and long-term success of WVI. After studied WVI’s history of development, I learnt that establishing an efficient organizational structure is substantial to WVI to broaden the profession and develop brand.

After the impressive results came out due to the series of structure reform, WVI felt it was time to launch the AIDS initiative, which is under the strong appeal for helping children eliminating AIDS and HIV in Africa and other areas. The problems for establishing the AIDS initiative are tremendous.

It would be impossible and even ruin the WVI to launch the initiative without the strong background support from WVI. Therefore, it is really necessary to have brief study on WVI’s organizational structure evolution that contains strategic actions to make the organization more and more efficient. Centralization At the beginning, in order to provide coordinated management of global field operations funded by the core support office, WVI’s council created a central international office. This kind of management mode resulted in the separation of its ”marketing ” and ”production ”functions, cultures dissimilated among groups.

The worst influence from the centralization is the frustration of national offices about having no control over many basic operations. What’s more, region offices did not recognize the fact of doing well at fund-rising and children sponsorship. In another word, the core competitive advantage was ignored. Decentralization After the frustration released by regional offices, the problem was diagnosed as unrealistic initial expectation, lack of local management and technical expertise and a top-down planning and control system. Later on solution came out as a new way of Area

Development Program (ADP), this soon became the dominant means of program delivery. Federal model the organization was reexamined on values, mission, and structure that were all to be open to challenge and change. After a new mission was set, the creation of Covenant of Partnership was defined. This means the partnership became the main form when making decisions, agreements, value and commitments sharing will replace the old ways of legal contracts and central controlling. WVI built up its formal organizational architecture, which is a federal model. Recognizing that that simple decentralization would mean losing economies of scale, the partnership made the goal of the new structure to try to make all partners as self-sufficient as possible but to maintain a strong core of common language, systems, and operations.

The evolution of the structure shows that neither centralization nor decentralization would be proper for WVI. The balance of autonomy and center leading can only be realized by federalism. The establishment of new organizational architecture soon helped the number of sponsored children from 70,000 to one million.

WV-U.S. is the largest financial contributor to the partnership. However, WV-U.S. used to falter in operations and losing opportunities. The manager realized that they had to take action to solve the problems in its management: costly appeals and inefficient operations. A series of actions were taken following two key strategies: increasing revenue and lowering overhead ratios. The managers started from reorganizing the office by cutting off the extra staff and promoting innovators. New integrated product and channel marketing team was used to replace the traditional marketing department. The new team focused on key drivers of marketing effectiveness:

Another strategy the team follows is being research-driven in defining what appeals donors. By doing so, WV-U.S. successfully increased the fund-rising growth while kept the marketing budget unchanged, meanwhile, all the focuses on donors turned out to be effective since the donor satisfaction increased remarkably. It is obvious from the reform of WV-U.S. that marketing is also an essential part for non-for-profit organizations to thrive. Because of the driven factors for non-for-profit organizations are not profit gaining, the spending and returns got unclear easily. The output and measures are usually ambiguous to describe.

Partnership is another strategy for WV-U.S. to keep up with. This is also a  fundamental principle of building up the new structure of WVI. In the corporate world, the more revenue usually represents the bigger authority and higher voice. However, even though WV-U.S. contributes to 50% of overall revenue and strong financial influence, it only holds 12 of the formal political control. Federal model makes the whole WVI organization a family that all parallel departments have equal right of speak. Only in this way, can unbalanced development or some potential immoral issue be avoided.

The primary goal of the Hope Initiative is to reduce the global impact of HIV/AIDS through the enhancement and expansion of World Vision programs and collaborations focused on HIV/AIDS Prevention, Care and Advocacy.

When it begins, AIDS Hope Initiative encountered challenges and resistance. As described by Casey, “…to implement an unprecedented worldwide program effort on perhaps the most controversial issue imaginable that would require new levels of coordination that we had never preciously achieved”. The resistances are mainly from the Donors and the Field. The WV-U.S. marketing people were very skeptical about launching the Hope Initiative because the sharp drop of the number of donors would hurt the well-built brand image of WVI. The resistances for the field concerned practically about the skills WVI had already mastered on the sector such as water, education, and economic development but no expertise on AIDS. Under the enormous pressure AIDS Hope Initiative was founded with a matrix laying out goals, beneficiaries, values and key design principles.

As a huge international organization, strategies corresponding with its core value and mission show decisive influence in its operations. Even though the environment is of WVI is different from the competitive business market, the rationale of coordinating people and laying out proper structure is basically the same. STAB principles talks about using strategies getting prevailed in business market, some of them are also applicable on non-for-profit organization like WVI.

For WVI and the Hope Initiative, the whole group of donors helping vulnerable children in third world can be viewed as its market. It is really difficult to recruit and cultivate stable donors. It has a direct effect on whether or not the organization can keep sustainable. That’s why WVI would pay extreme high attention on maintaining a long-term donors group.

WVI forms as a federal structure, which has multi segments on management. Performance of each segment and cooperating among segments need a powerful  leadership in order to fulfill the ultimate goals. Especially in the turbulent time, for  instance, when the Hope Initiative was just launched, Casey and his team encountered huge pressure from different sides. Under this circumstance, the leadership ability and faith of managers determined the future of the new project.

As a Christian based organization, WVI is totally working for glorifying God and it  utilizes its passion to show stewardship. As illustrated in the book marketplace  Christianity, WVI shows three characteristics of life skill development, leadership  development and management skill development. Especially, WVI’s statement of core value shows its Christianity features clearly: We are Christian, we are committed to the poor, we value people, we are stewards, we are partners and we are responsive. Unquestionable, WVI is focused on serving others, improving others life and devoting on cultivating a long-term environment for humanitarian.

According to the SWOT analysis, the weakness and threats shows the current  and future problems the Hope Initiative need to identified and overcome. Getting involved in helping AIDS people is not as easy as helping normal poor people. More and more advocacy is needed to eliminate the social prejudice in order to get the project through.

Also, it is important to coordinate management inside the organization to get  cohesive power. Keep being strategic on establishing the effective structure is vital to maintain the project. As Hope initiative is the pioneer to get into affairs of rising money for HIV groups, lacking of experience is inevitable. However, focusing more on cooperating with HIV R&D organizations will help to improve the ability of preventing AIDS prevalence and caring affected children.

Significantly, marketing should always be valued to ensure operating smoothly and effectively. The revitalizing tactics enacted in WV-U.S. proved effective on improve the management. Similarly, the successes for WVI’s marketing can be referentially meaningful for AIDS Hope Initiative. World Vision International has established the HIV/AIDS Hope Initiative where their main focus is on prevention, care and advocacy. As the organization moves to carry out the stated mission, issues affecting location, government, and education may arise. Maintaining a mission focused on Christian principles while serving venerable children affected by AIDS the organization will be faced with issues requiring effective decision-making.

Building a relief effort in a diverse country poses concerns about the host government to potential political tensions over resources or laws against such aid. Having a comprehensive understanding of the host government and regional rule of law is critical as the organization continues to conduct operations overseas. World Vision International incorporated such expertise throughout its organizational structure.

The organization has partnerships with four regional vice presidents within the areas of who have extensive knowledge of the programs and populations they represent. Having a comprehensive knowledge of the area in which the organization serves enables the partnerships to focus its efforts. Determining the locations World Vision International is going to target, the organization carefully examines and analysis the laws of the country in which they are servicing. Effective nonprofits comply with the laws and respect the political landscape to avoid being ousted by the host country. 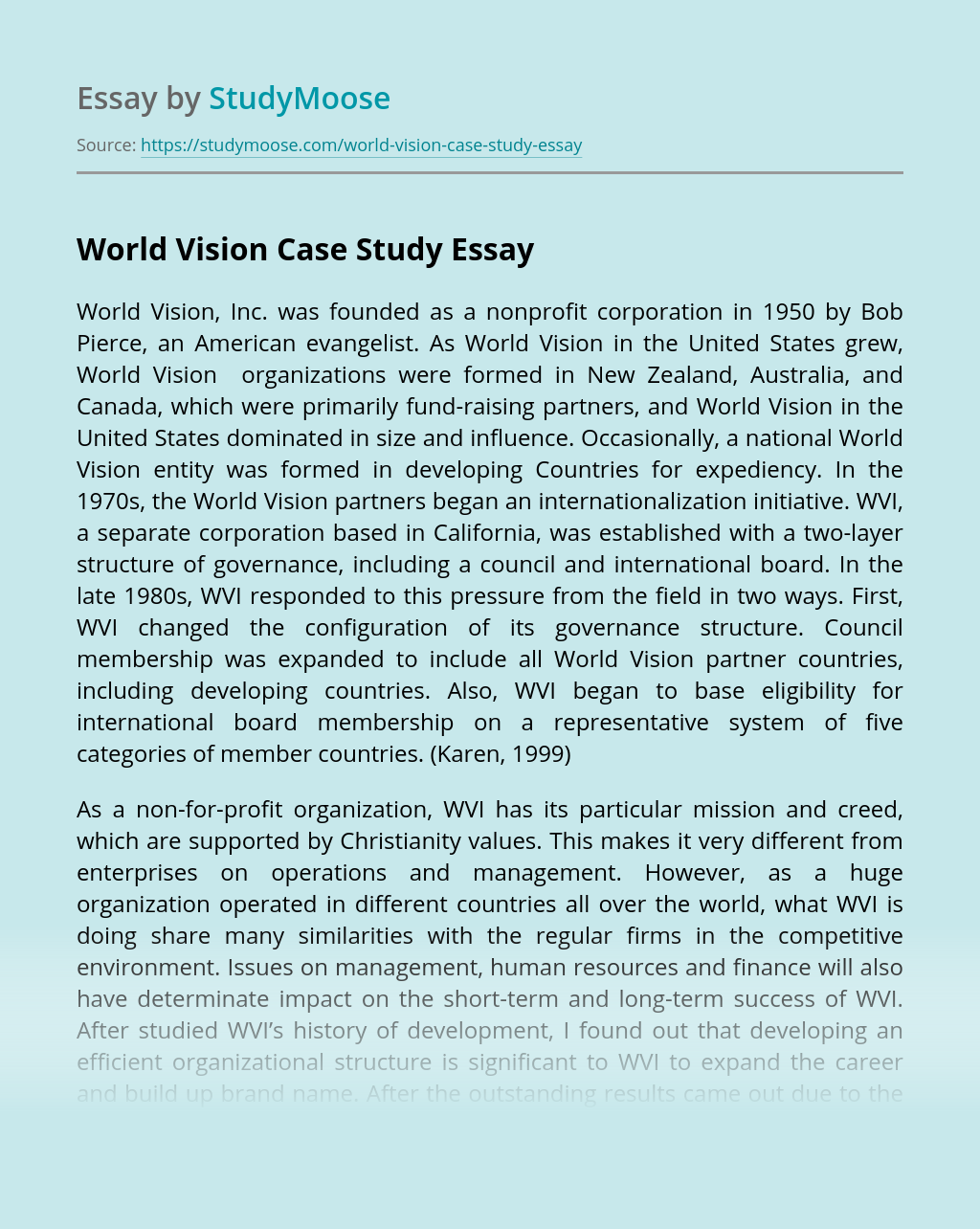