A typical day for women: Wake up, cook, feed children, clean, teach children, clean, cook, sleep, while their husbands were off at work making money to support his and his wife’s family. That all changed once World War One started and the men were conscripted into the war leaving, the wife’s at home to do all of their normal tasks, as well as what the men used to do; providing for the family. Women, who previously worked in domestic service, were encouraged to take on jobs normally done by men.

Don't use plagiarized sources. Get your custom essay on
“ Womens Role in WW1 ”
Get custom paper
NEW! smart matching with writer

Women joined the police force; they worked as postwomen, bus conductors, on the railways, drove delivery vans, and worked in farming and forestry. A lot of women went to work in munitions factories, which was important work but could be dangerous. Some women were even running businesses while their husbands were away. When the women weren’t working they took on numerous voluntary activities, such as knitting and sewing items to be shipped overseas to the front.

They made things like pillows, sheets, flannel shirts, scarves and socks. They were also often seen walking through the streets, encouraging able-bodied men to join the war effort. During the First World War, some woman began working in factories. These women worked with one of the most important things which were Ammunition. Exposing themselves to all the chemicals caused their exposed skin to turn a yellowish color due to the absorption of the chemical in the skin. Though it was not meant as an insult, these women were given the nickname “canaries”.

These women worked incredibly hard and risked their life every day; in general, women did very well, surprising men with their ability to undertake heavy work and with their efficiency. By the middle of the war they were already regarded as a force to be proud of.

Many women joined the newly formed auxiliary army, navy and air force services. They worked overseas as staff drivers, ambulance drivers etc, but most commonly they went overseas to nurse the wounded in the army. At least 2139 nurses served abroad between 1914 and 1919 and a further 423 worked in military hospitals in Australia. They were nicknamed the bluebirds because of their blue uniforms and their white veils. Nurses of WWI worked from sun up to sun down, and barely got any sleep. However, this did not bother many nurses. The conditions were cold and sometimes rainy. The food consisted mostly of beans and potatoes, meat was rare. The hygiene was very poor, there were no baths, the living environment was very unfit and many nurses would be sleeping in one small confined space.

Women, like men were divided in their reactions to war, with some championing the cause and others worried by it. On the other hand, not all women agreed with the war. Many were strongly against the war and refused to help. Sylvia Pankhurst remained opposed to the war and refused to help, as did other suffrage groups in Germany, socialist thinker and later revolutionary Rosa Luxembourg was imprisoned for much of the war because of her opposition to it. In 1915 an international meeting of anti-war women met in Holland, campaigning for a negotiated peace; the press of Europe reacted badly. Women continued to speak out as the war progressed, being treated with suspicion and sometimes imprisoned, even in countries supposedly guaranteeing free speech.

Women taking over the jobs of men was the start of major social change. Before the war, women had been content to stay at home to bring up the family and do domestic work. It was considered unbecoming for a woman to work. During the war it was considered unpatriotic not to. Women relied less on their husbands to take care of the money and they became the bread winner. Many changes came about as shown by the quote from A. J. P Taylor English History “Women became more independent. Women paid for their round at the pub. Fashion changed for practical reasons: never again did skirts sweep the ground. Women’s hats became neater. Not all changes in work lasted after the war, but some did. “

By the end of the war women had shown what they are capable of to the matriarchal society. The involvement women had in society during the war led to the women’s suffrage. This was a movement aimed at women’s right to vote. In 1917 the Military’s Voters Act was passes stating that women who are British subjects and have close relatives in the armed forces can vote on behalf of their male relatives, in federal elections and by 1919 all women over 21 had the right to vote in a federal election. Women’s suffrage groups had existed since the 1870s, but during the war it was hard to ignore their arguments. Women were serving in the war, taking over from the men in factories and offices, holding families together while the men were overseas, and working in voluntary organizations that supported the war effort. They couldn’t be kept out of political life any longer.

Women undoubtedly showed their strength and ability to do anything a man can do throughout the war. Women in WW1 took over the jobs of men, volunteered by sewing and knitting for the men at war, campaigned in the streets, all while raising a family alone. Many women even took part in the war as nurses, staff drivers, ambulance drivers etc. Women taking over men’s jobs fueled a major social change in society, their hard work did not go unnoticed and by 1919 all women over 21 had the right to vote in a federal election. 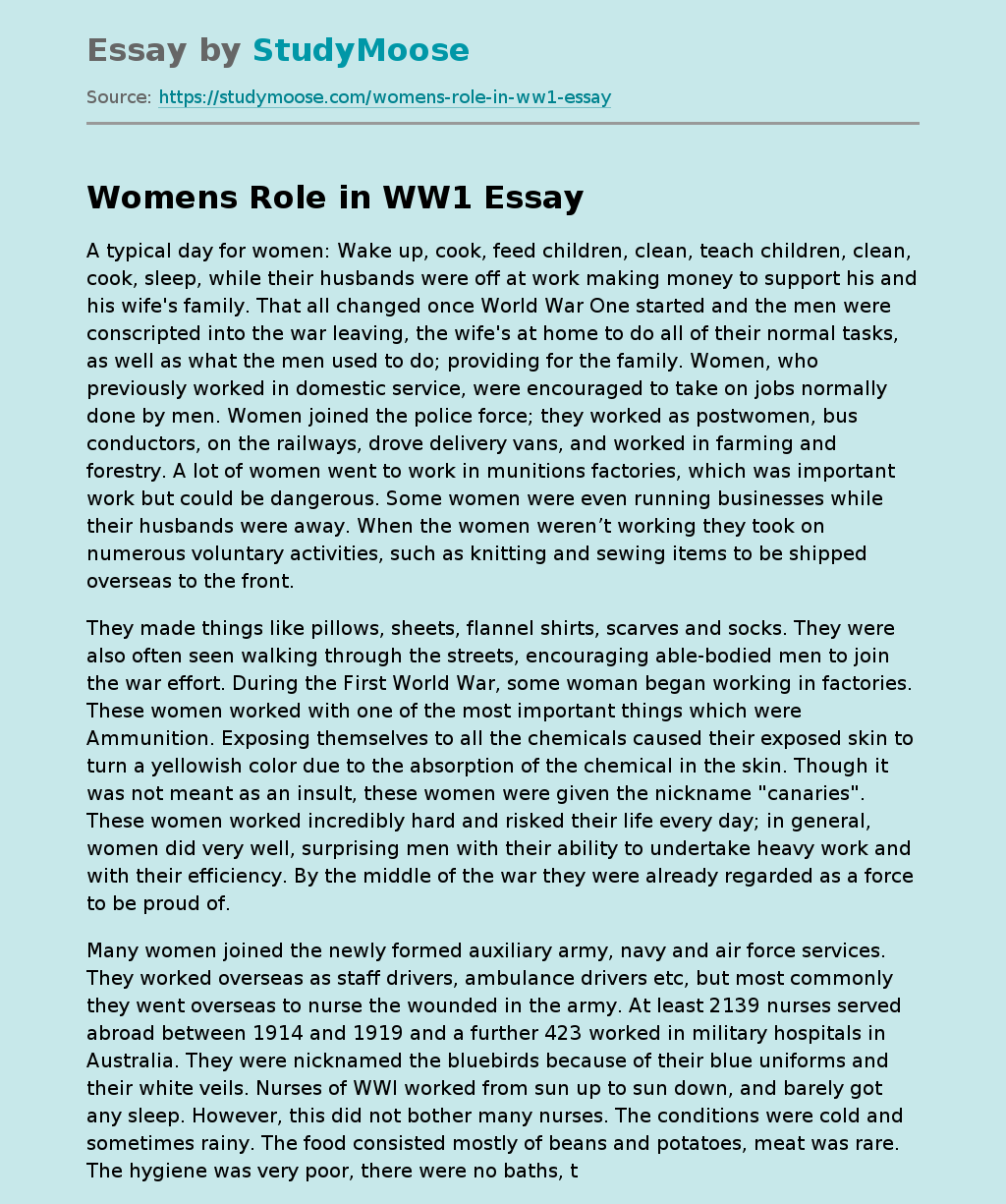