A discussion of the role of the witches in William Shakespeare’s “Macbeth”.

In Shakespeare’s time, many people were superstitious; they believed that that their lives were strongly influenced, if not dictated by fate. They also thought that the world was full of supernatural creatures, such as witches, ghosts, and many other such beings. Shakespeare incorporated these aspects of belief in his play Mac Beth. The witches, although accurately predicting what would occur, i.e., Mac Beth would be king, they did not specify how their prophecies would be realized.

Don't use plagiarized sources. Get your custom essay on
“ Witches and Macbeth ”
Get custom paper
NEW! smart matching with writer

The witches did possess some sort of power (unless they were privy to some political information which MacBeth was not aware of), otherwise, how could they have known that MacBeth had been appointed Thane of Cawdor? Of course, once MacBeth, who, living in such a society, was superstitious, is presented with Cawdor’s title, he believes that the other prediction, namely his kingship, must come true. Banquo notes the danger inherent in believing (and subsequently acting on) the witches’ predictions; he says, “Were such things here as we do speak about?/Or have we eaten on the insane root/That takes the reason prisoner?” Act I, scene 3, ll.

83-85. MacBeth is quite overwhelmed when he hears that he is now the Thane of Cawdor. However, almost immediately, he starts thinking about how to bring about his rule as king. “{Aside} Two truths are told, As happy prologues to the swelling act Of the imperial theme. I thank you, gentlemen. {Aside} This supernatural soliciting Cannot be ill, cannot be good.

If ill, Why hath it given me earnest of success, Commencing in a truth? I am the thane of Cawdor. If good, why do I yield to that suggestion Whose horrid image doth unfix my hair And make my seated heart knock at my ribs, Against the use of nature? Present fears Are less than horrible imaginings; My thought, whose murder yet is but fantastical, Shakes so my single state of man that function Is smothered in surmise; and nothing is But what is not.” (1.3.127-141) MacBeth seems to be fantasizing about having a direct role in Duncan’s downfall. He apparently believes that the only way to make the witches’ predictions come about, is to act on his urges (although he attained the title of Cawdor without any extraneous effort). A wife has a large influence on her husband’s thinking. Lady MacBeth tries to persuade MacBeth to murder Duncan. Throughout Act I, scene 5, there are many speeches in which she tries to convince him. However, the monologue most relevant to my theme is Lady MacBeth’s first speech: “Glamis thou art, and Cawdor; and shalt be What thou art promised. Yet do I fear thy nature; It is too full o’ the milk of human kindness To catch the nearest way. Thou wouldst be great; Art not without ambition, but without The illness should attend it. What thou wouldst highly That wouldst thou holily; wouldst not play false, And yet wouldst wrongly win. Thou ‘ldst have, great Glamis, That which cries, “Thus thou must do, if thou have it”‘ And that which rather thou dost fear to do Than wishest should be undone. Hie thee hither, That I may pour my spirits in thine ear, And chastise with the valor of my tongue All that impedes thee from the golden round, Which fate and metaphysical aid doth seem To have crowned the withal.” (1.5.10-24) Lady MacBeth believes that although the titles were promised to MacBeth, he needs to possess ambition in order to bring about his fortune. This belief is what drives MacBeth and his wife during the first two acts of the play. Although they feel that they need to make some effort, they do not seriously consider the possibility that the predictions would be realized without any effort- MacBeth might still be king without having to murder Duncan. Towards the middle of the play, in act three, the witches meet with a goddess of evil, Hecate, who demands that they lead Mac Beth astray, so he will become arrogant, thinking that he is invincible. She says: “How did you dare To trade and traffic with Macbeth In riddles and affairs of death; And I, the mistress of your charms The close contriver of all harms, Was never call’d to bear my part, Or show the glory of our art? And, which is worse, all you have done Hath been but for a wayward son, Spiteful and wrathful; who, as others do, Loves for his own ends, not for you. But make amends now: get you gone, And at the pit of Acheron Meet me I’ the morning: thither he Will come to know his destiny: Your vessels and your spells provide, Your charms and every thing beside. I am for the air; this night I’ll spend Unto a dismal and a fatal end: Great business must be wrought ere noon: Upon the corner of the moon There hangs a vaporous drop profound; I’ll catch it ere it come to ground: And that distill’d by magic sleights Shall raise such artificial sprites As by the strength of their illusion Shall draw him on to his confusion: He shall spurn fate, scorn death, and bear His hopes ‘bove wisdom, grace and fear: And you all know security Is mortals’ chiefest enemy” (3.4.143-180). Hecate is rebuking the witches for not consulting her about revealing MacBeth’s destiny. She seems to reveal that the witches do have the power to see the future, but their riddles (with Hecate’s help) serve only to confuse MacBeth into making his fatal mistakes. Although MacBeth needs to be wary, the witches’ objective is to trick MacBeth into making the fatal mistake of feeling secure and even invincible. Again, once he hears the prediction, MacBeth feels compelled to become bold, killing MacDuff and his family. He forgets the warning to “Beware MacDuff,” and instead, focuses on the aspects that make him feel over-confident. In conclusion, although the witches did have the power to accurately predict significant events in MacBeth’s life, the actual ‘carrying out’ of those prophecies was undertaken by MacBeth (and his wife). They may have attained their status without their illegal actions, but, by acting on their own prerogative, both MacBeth and his wife carry full blame 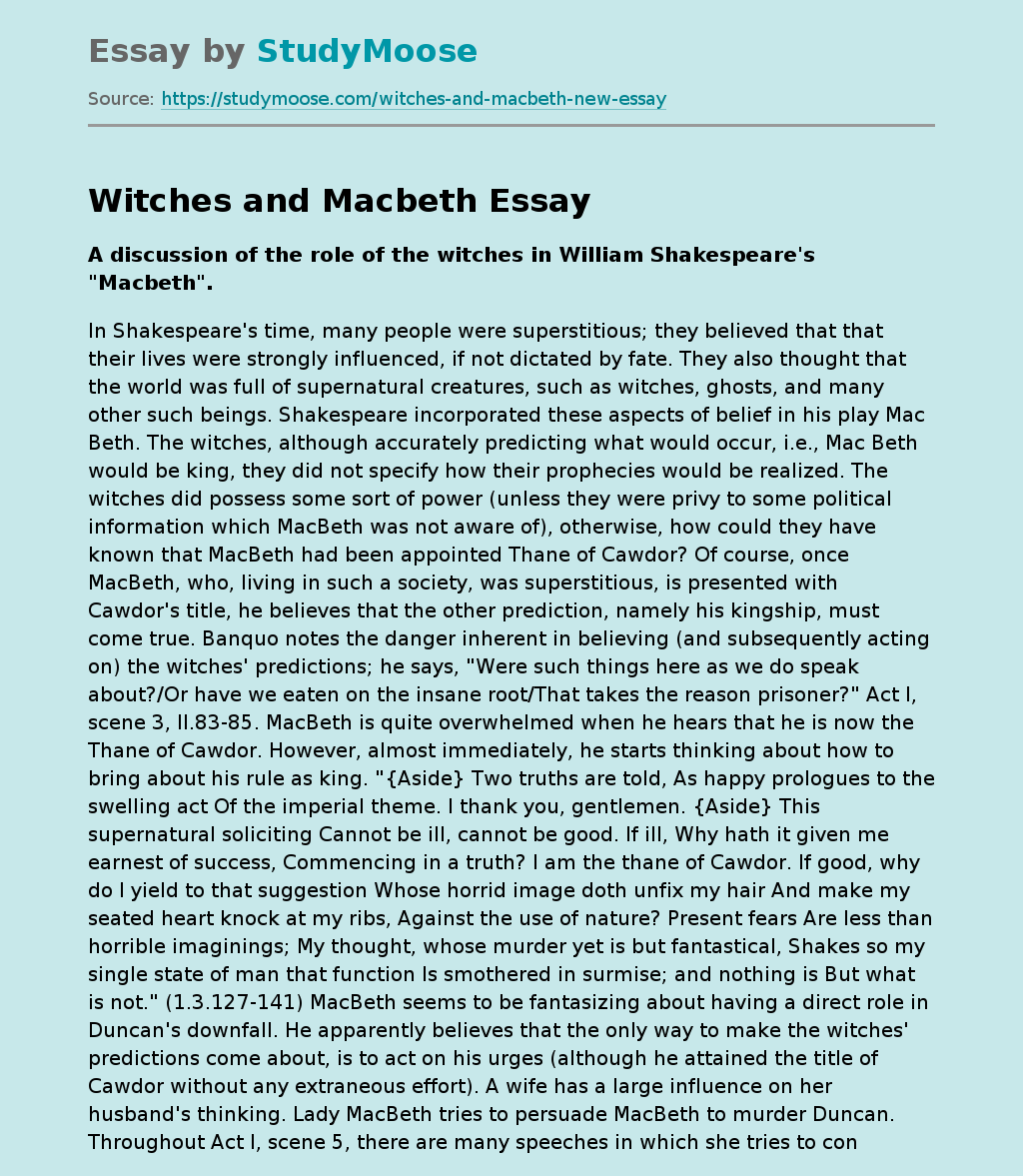