Select a character from a novel or play who conforms outwardly while questions inwardly. Analyze the nature and elements of this internal conflict, and discuss how the tension between conformity and defiance contributes to the meaning of the work.

Winston Smith, the protagonist of Orwell’s 1984 is an example of an everyday citizen in Oceania who obeys the rules of the government but questions them inwardly without speaking up. He is described as the only hope for the totalitarian system to be abolished, but ends up weaker than the readers think.

Don't use plagiarized sources. Get your custom essay on
“ Winton Smith, 1984 ”
Get custom paper
NEW! smart matching with writer

The reader might admire his desire to overthrow the tyranny of the state; however he was fully aware of the consequences of his actions, which cause him to look more foolish and psychotic than brave. Winston Smith works as a clerk in the Records Department of the Ministry of Truth, where his job is to rewrite historical documents so they match the constantly changing party line. This involves revising newspaper articles and doctoring photographs — mostly to remove “unpersons,” people who have fallen foul of the party.

Because of his proximity to the mechanics of rewriting history, Winston Smith nurses doubts about the Party and its monopoly on truth. During a regular day at his work, Winston realizes that you can create a dead man and not a living one. The Ministry of Truth used forgery to make Comrade Ogilvy, exist in the past although he never existed in the present. However, Winston chooses to ignore this discovery and continue to work for The Ministry of Truth.

Winston also guiltily buys a diary from Charrington although he was aware of the dangers of having it in his possession. It was not illegal to have this diary, since there were no laws enacted, however if detected it would reasonably be punished by death, or at least by twenty-five years in a forced-labor camp. He dipped the pen into the ink and faltered before marking the paper, proving he was conscious that it was a decisive act.

He might’ve dodged it successfully for a while, even for years, but sooner or later they were bound to get him. Winston also later hid the diary into a drawer but questions whether it was actually useful in hiding it since he already had committed the felony. “Thoughtcrime did not entail death, thoughtcrime WAS death.” (1985, pg. 28) The sexual love between Winston and Julia was also dangerous because affairs between party members were strictly forbidden: even within marriage, sex is to be viewed as something disgusting, a duty performed only to beget children for the service of the Party. The lovers knew well that they will soon be detected and arrested, and Julia observes that “everybody always confesses. You can’t help it. They torture you.” But Winston argues that “confession is not betrayal.

What you say or do doesn’t matter: only feelings matter. If they could make me stop loving you – that would be the real betrayal.” Julia believes this is “the one thing they can’t do…they can’t get inside you”. The lovers are able to derive some comfort from this, believing that their love will remain intact even when they are arrested and tortured. Although Winston appears to be courageous, he repeatedly doubts the safety of the room above Charrington’s shop and also has second-thoughts about Julia and her affair with other party members. “Folly, folly, his heart kept saying: conscious, gratuitous, suicidal folly!” (1985, pg.137)

It is evident that Winston may have intellectual impairment which affects a person’s ability to reason and understand, problem-solve and adapt to new situations. The harsh society he is forced to live in and physical factors such as jerking exercises may have caused psychotic depression where he wasn’t fully able to understand the consequences, which further creates disheartening emotions in the reader (http://www.webmd.com/depression/guide/psychotic-depression). One of the symptoms of psychotic depression is the struggle of an individual within oneself and attempt of suicide, which is why Winston may have used each and every one his actions as a pathway to his death. 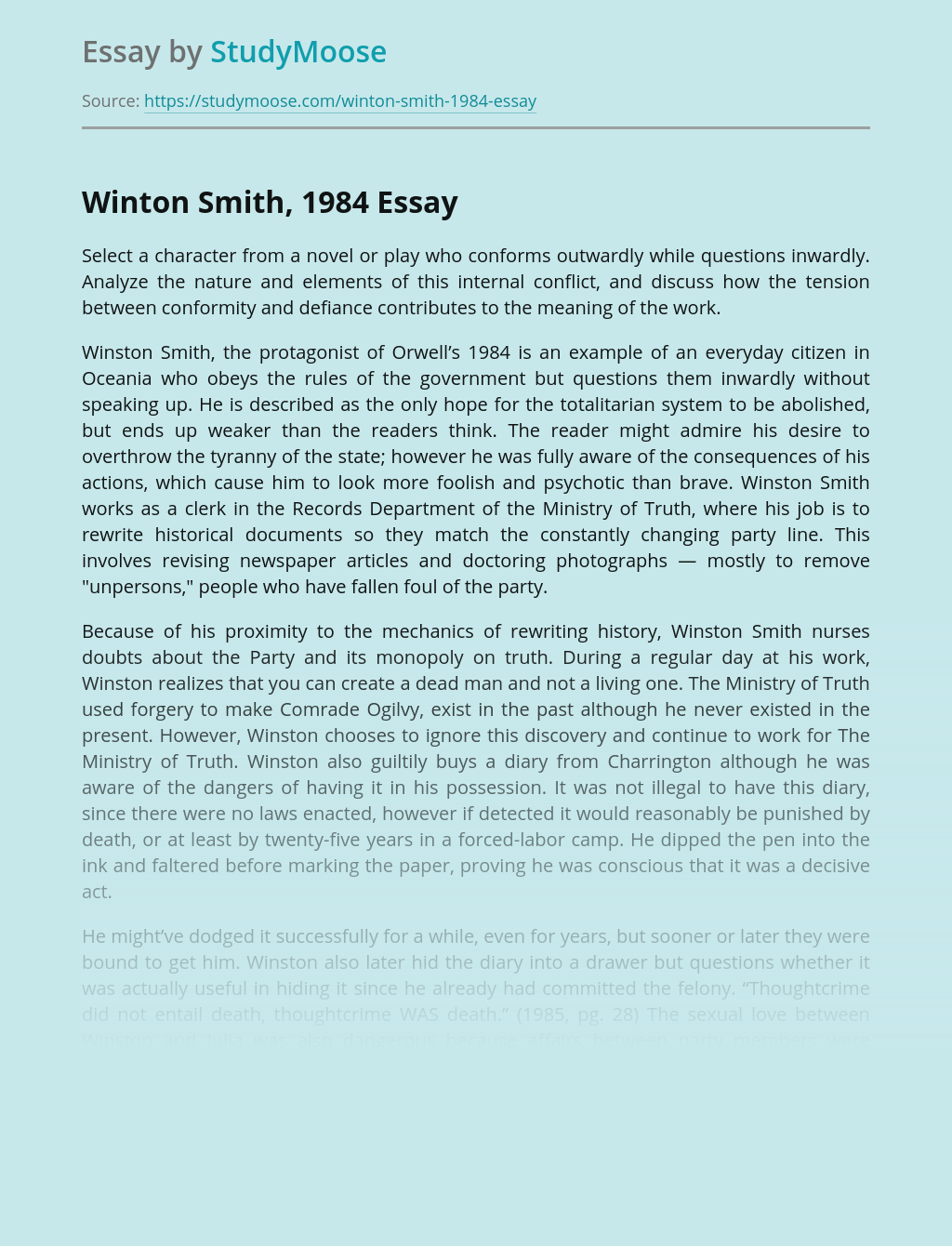