“Winning isn’t everything, it’s the only thing.

Don't use plagiarized sources. Get your custom essay on
“ Winning isn’t everything ”
Get custom paper
NEW! smart matching with writer

” I strongly do not agree with this statement because, Yes, it’s a happy feeling once a person wins, but there is much more to life than winning. I think without teamwork and good sportsmanship and putting your best foot forward would not be good winning.

“Winning isn’t everything; it’s the only thing.” It is like saying Chris Gale is the most important person on West Indies team.

Although winning is important and sports are, and should be taken seriously, by far, winning isn’t the only thing. Putting everything you have and giving one hundred percent to the effort is also very important to competition. A team that puts everything they have into a game and comes out the losers, has a lot more to be proud of than a team who comes in first but only gave some effort. Over the years many teams have lost important games due to a few inches, one pitch or a strike of “bad luck” although these teams lost, they take it into the next game and gave one hundred and ten percent.

“Winning isn’t everything but making the effort to win is” (Maraniss,2000). This phrase was made by Vince Lombardi. This phrase has turned out to be a very important motivating phrase however, I stand my grounds of disagreeing with the statement because losing builds a person’s character and at the same time help that person to endure and keep going.

When I was younger, I used to love playing basketball. I didn’t hype the sport that much but it was fun playing it and so it captured my attention. Just like me, there were other athletes who knew nothing much of the sport, instead, they played for the enjoyment. Several reasons other than winning was just for the fun, learning and playing for the experience. Playing a sport is not all about winning. “If you win through bad sportsmanship, that’s no real victory”(Zaharias, n.d.). This just shows, if a person focuses so much on winning, then they will never be as happy, instead, they forget the reason for loving the sport.

Winning causes arrogancy in a person. Teammates may think because they won, they are better than the other. It gives them a certain label and most if not all, will make other teammates angry. Imagine Carnage FCC wins in their football game. It is quite understandable that they will portray a heavy feeling that no other team is better than they are and this can cause lowering of the other team spirit which competed with them.

To lose and walk away might lower one self-esteem but at the same time helps that person by showing them the values derived from losing. It builds motivation to rise above. Being on a losing team can do more than just build one’s inner character but help with showing them means and ways to remain focus for that’s the only way they can prove worth and earn respect. West Indies cricket team for example, they are respected across the world. It is not because they won so many games, but because each player knows the meaning of teamwork and they help build each other. They are all humans just and they make mistakes just like every other person but what makes it better is that they learn from their mistakes and come back even stronger.

Losing at something that you have worked so hard for can help one build their character. Back in my Secondary school days, I trained so hard for the 400 meters. Every evening I was out practicing. Finally, the day arrived, I was confident that I will win the race. Unfortunately, I came forth. I cried and cried because I trained each day. I felt disappointed because I let my team down. I was so ashamed that I wasn’t even feeling the vibes to run any more races. I went into a corner, sat down and calmed myself. Before 20 minutes elapsed, I was able to pick myself up and headed back out to the tracks for the other race. I didn’t place in the race, but I was able to build my character once again to get back on the field.

The reality is, we do not get what we want every time. Chances may arise that we get a job, promotion and sometimes we don’t. It is a good lesson for children to learn and go through things early as it will help them prepare themselves later down in the future.

Another reason why winning isn’t everything is that it encourages self-reflection. Losing helps a person reflect on their attitudes, their morals, and ways in which they can do better. Persons in these situations are often forced to evaluate themselves in the areas for improvement and preventing complacency.

Last month at the Erie Mayors Cup 10K and 5K race, competitors from around the tri-state area were in competition. Trophies and plaques were to be awarded to the first, second and third place runners.

A 10K is a 6.2 mile long race across the streets of downtown Erie in 85 degree heat and humidity. Runners who are running in the 10K have to show tremendous determination, stamina, speed and physical agility not to mention surviving in grueling temperatures and humidity. Great Olympic and Boston Marathon runners have dropped out of a 10K due to it’s intense strain. I was on hand to witness the race and saw many great athletes finish the race with great times. These are runners who put every day into running and run every race. Soon after these runners had crossed the finish line and been handed their trophies, the last runner in the race came through the finish line with his hands in the air and to thunderous applause. He was 87 years old, and had taken up the sport after his doctors told him he had a cholesterol problem when he was 67.

The runner in this story was not out to win the Mayor’s Cup 10K, he wasn’t out to set a record time or come in first. He came in dead last, but finished the race. If he would have listened to Vince Lombardi and say “Oh, I can’t win, their are professional runners from colleges and high schools competing against me!” he wouldn’t have completed his life long goal of running in a 10K. Better late than never. The most important thing is for all who participate is to have fun and do it with pride and determination, to set a goal and reach it. Two good sayings that contradict Vince Lomabardi state…”It doesn’t matter if you win or lose, it’s how you play the game” and “If at first you don’t succeed, try, try again” Words to live by.

Winning is valuable when it comes with challenges and effort. By this, one can feel a sense of achievement knowing that they did the right things and can be happy with the end results.

The realistic truth is that without competition in life whether in sports, on the workplace or school, a contest will no longer be much fun for the persons taking part. We also cannot disregard any forms of competition due to this reality. Many people just want to win and make their life long pursuit a reality. There are still those who look at the broader picture and look at it with a sense of discipline. For those who can enjoy the love of a game be it in sports or social winnings rather than drawing themselves to the fulfillment from learning to “not win” then they can strongly say they have overcome. I think the key lies in redefining winning in terms of certain goals working to achieve it and getting rewarded. 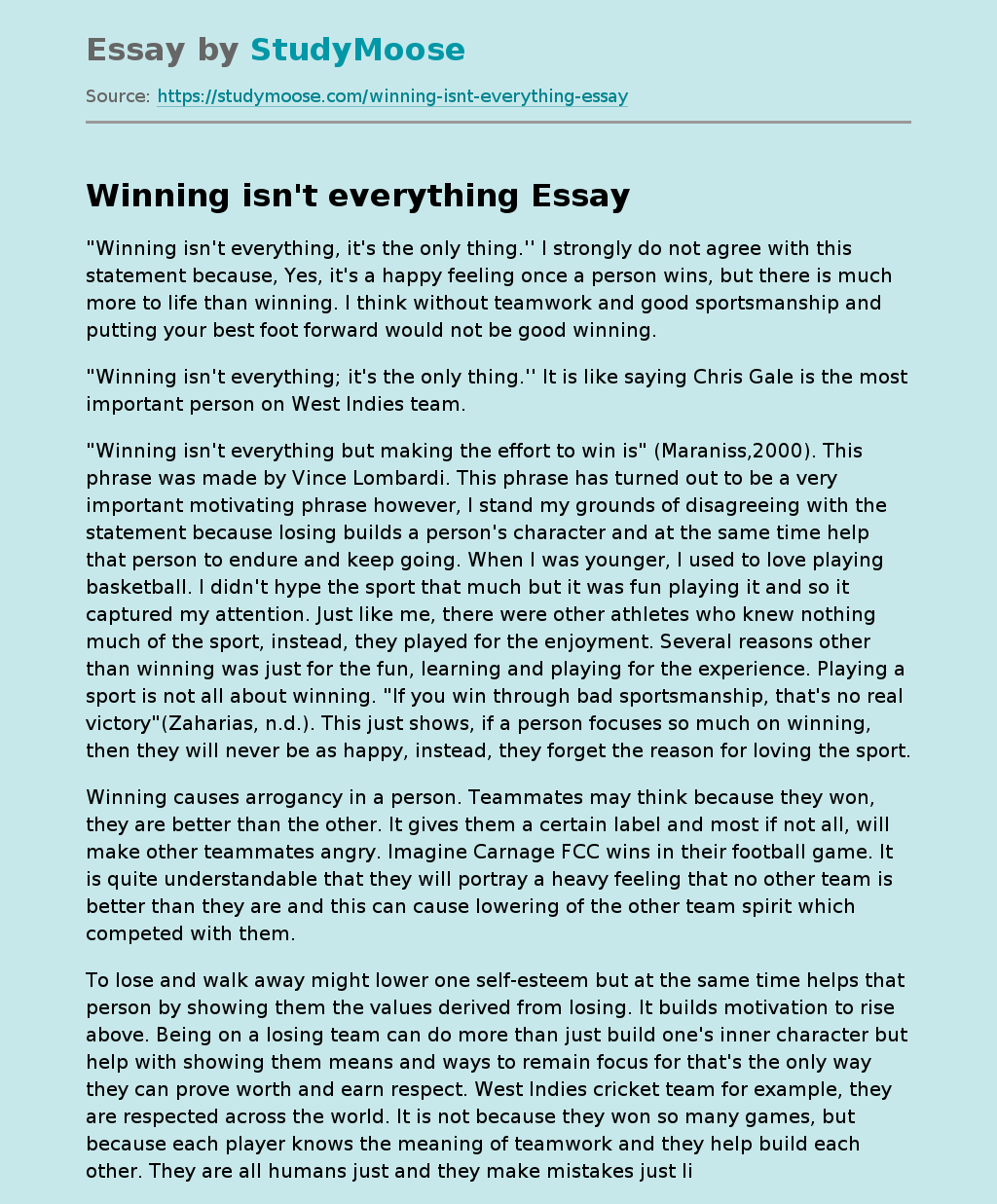