Hughes’s opening line is sculpted in such a way that it gives the reader an abundance of sensations. The poet achieves amazing efficiency in the line “far out at sea all night” in that the reader is exposed to distance, time and environment. The metaphor of the house being “out at sea” projects the image of a boat “far out” feeling totally isolated. The house faces wave upon wave of inexhaustible pounding from the wind as a boat would from an enraged sea.

Don't use plagiarized sources. Get your custom essay on
“ Wind by Ted Hughes Analysis ”
Get custom paper
NEW! smart matching with writer

The time scale of “all night” could literally mean all night or it may refer to the perception that the wind is so acutely intense that it feels prolonged. The words “crashing”, “booming” and “stampeding elevate the wind to one of biblical proportions which sounds like an orchestra thumping out a killer crescendo. The line “stampeding the fields” accentuate the brutality of the wind attacking the natural surroundings. In keeping with the oceanic metaphor the house “floundering” evokes a sense futility.

The alliteration in “black” and “blinding” impose emphasis upon the words and a heightened sense of awareness in the reader.

The second stanza is a witness to the winds legacy. The magnitude of the winds power is illustrated with “the hills had new places”. The ultimate measure of the winds potency is that its changed the environment which we would normally imagine reassuringly permanent. The personification in the “wind wielded blade-light” makes the wind dangerous and randomly spiteful. I think the “ black and emerald, flexing like the lens of a mad eye” refers back to the sea metaphor in the first stanza.

A stormy sky like a stormy sea appears black and not green but emerald acknowledging depth. Like the sea the sky is rapidly changing or “flexing”. The word “mad” carries connotations of being unpredictable and unreasonable.

The third stanza introduces characters into the ordeal. Hughes uses the characters add familiarity for the reader. When the character describes how they “scaled along the house side” the reader can familiarise themselves with what its actually like to tackle nature at its most savage. In this case the character has to “scale” instead of walk almost like a mountaineer due to the oppressive wind. The statement the “wind dented the balls of my eyes” demonstrates the winds ability exercise spite and pain on a personal level. The winds monumental power is again exhibited when Hughes states “The
tent hills drummed and strained its guyrope”. Once more the fixed immobility of the hills is being questioned. The poem continues with the wind further bullying the geography with “the fields quivering. There is more alliteration with the “black back gull bent like an iron bar slowly”. This slowed reading pace reflects the progress of the bird and the iron bar simile has connotations of a crushing force. The poem returns to the house. The house now has developed the fragility of a “fine green goblet” teetering on the edge of shattering.

The characters inside are so preoccupied by their tormentor they “cannot entertain book, thought or each other”. While the wind continues to dictate to the outside world it has also managed to permeate into the thoughts of the characters affecting them mentally as well as in a physical sense. The poem ends with the characters gathered around a blazing fire and “feel the roots if the house move” resulting in a heightened sense of vulnerability. In the last two lines of the poem Hughes writes the “window tremble to come in” and “stones cry out”. The personification in “tremble” and “cry” show that even inanimate objects are displaying signs of fear and distress. The theme for the poem is ultimate respect for nature’s weapons and total humility for anything caught in the conflict. In some instances respect turns to terror as if hiding from an omnipotent tyrant. The structure of the poem is consistent throughout with six stanzas of equal length. Hughes uses a lot of alliteration to break up the reading fluency to reflect the choppy subject of the poem. Hughes’s use of metaphor skilfully illustrate the scale and nature of the wind whilst drawing attention to the way the wind exploits the delicacy of the surroundings we usually consider so dependably solid.

Wind by Ted Hughes Analysis. (2016, May 11). Retrieved from https://studymoose.com/wind-by-ted-hughes-analysis-essay 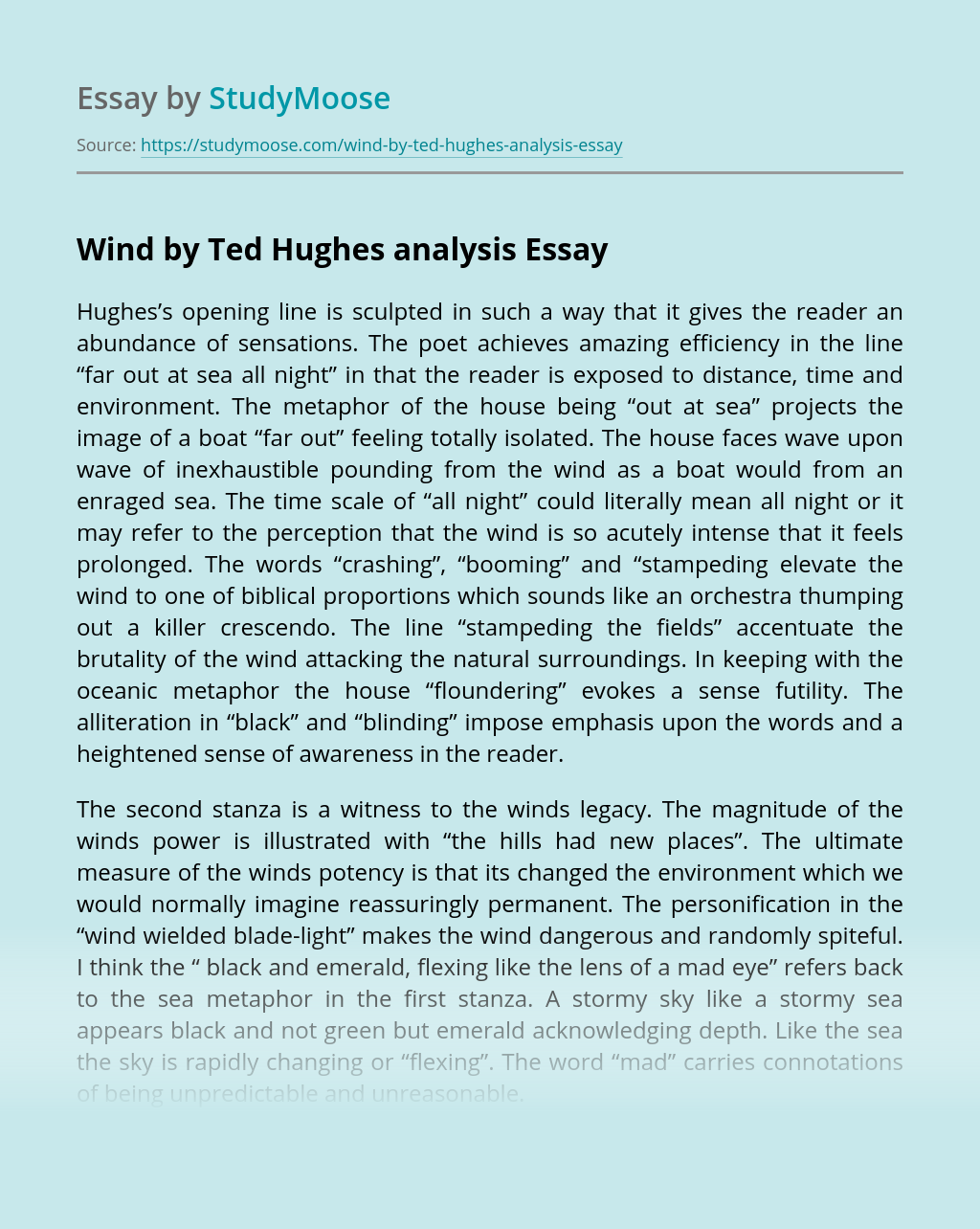