Why Our Campuses Are Safer Without Concealed Handguns?

In a national survey, 94% of Americans answered “NO” when asked, “Do you think regular citizens should be allowed to bring their guns [onto] college campuses?” (640). This just shows how much students and faculty disagree with concealed carry. However, some people on campus feel safer if they have a gun. There are two sides of this discussion, there are people who say that it should not be legalized to have guns on campus because it would increase danger and violence at school while the opposing side says it should be legal because they feel that it would make them safer and that they would be able to defend certain situations at campus.

Don't use plagiarized sources. Get your custom essay on
“ Why Our Campuses Are Safer Without Concealed Handguns? ”
Get custom paper
NEW! smart matching with writer

These two sides have valid points, however legalizing concealed carry could threaten the safety of students and staff.

If concealed carry was legalized some students and staff would go out of their way just to get a gun so that they could protect themselves too because if they didn’t have anything to protect themselves with their lives would already be in danger to defend themselves. According to “Casebook” there is a study that states, “Since 1990, there have been more than twenty multiple-victim shooting incidents on college campus” (633). What they are trying to explain is that the number of shootings on college campus are already at an all-time high and the increase of gun availability could increase the number of shootings even more.

If students and staff showed up with guns on college campus, there would be more of a chance of gun violence than if there was not a presence of a gun at all. Students could feel pressured to go out and get a gun just so that they could protect themselves. Guns are not used for only protecting but they are used in other ways as well such as using them in harmful ways. According to Students for Gun-Free Schools (SGFS) there is a study in 2000 by Harvard that states, “Guns are used to threaten and intimidate far more than they are used in self-defense” (639). SGFS is pointing out that the use of guns is used to threaten or intimidate other people more than to use them for defending yourself, which means that students at school would most likely use guns to intimidate and threaten other students which would increase the likelihood of gun violence. Since having guns would create tension all over school campus it would create problems between students and professors. This could increase dangerous situations for both students and professors if one caused conflict for one another. Concealed carry on college campus would just create chaos at colleges and would be better off without guns since it would decrease gun violence and also not having a gun a necessity to have.

Adding to the problem, allowing concealed carry will distract students and staff from their learning environment and they may not perform as well in class. If students had the right to have a gun, then other students may be on edge since the tension of a gun is in the room. Whether a student uses the gun or not students and staff would be distracted because they still feel unsafe in their environment. In an article found online, David Daniel, deputy chancellor of the University of Texas System says, “On some campuses, there was a very high level of angst, tension and it was a distraction from the core work of university’s…” (qtd. in Clark). Students should not have to come in to college campus worrying about someone having a gun on the, instead, students should be allowed to walk into college campus knowing that they will be safe and have nothing to worry about. Students may not be able to perform the task at hand at full potential because they are distracted from the fact that there is a gun on college campus. What this means is that even though the gun is not used the thought of the gun will affect the ability to work on an assignment or not. Not only does it increase tension and distractions to students and teachers, but it also doesn’t let students voice their opinion in classrooms without fearing to offend another student or teachers’ point of view. Creating different views on a subject or topic could create fear to students and staff and could potentially also make the learning environment harder to adapt to. Andrew Wilson, a student at the University of Pennsylvania School of Law explains “Students must grapple with the stress of grades and careers…the potential for offence in legal classrooms is high and adding guns in the mix is dangerous.” (635). This basically implies that if students have bad grades or gets offended in a classroom the chance of someone pulling a gun out is higher than if guns weren’t in the mix. The stress of students creates dangerous thoughts that could lead a student making bad decisions. With adding guns into schools it could create a dangerous environment to students and at the same time not allow students to fully experience their education. The potential of offence in schools could also create dangerous environments for students and professors. Guns on campus could detract from their learning environment and their education could be affected as well.

If concealed carry was legal to students on college, it could potentially increase the probability of suicides in college campuses. In a study found by SGFS says, “One study found that 24 percent of college students had thought about attempting suicide and 5 percent had actually attempted to kill themselves’ (641). What this implies is that not only is it dangerous to other people, but it can also be dangerous to the person who is wielding the gun. Most students cannot handle some situations and they think the easy way out is to commit suicide, and if concealed carry was allowed then the option of suicide would be likely. Adding guns to the mix of suicidal thoughts would just make the process of suicide much easier than if they weren’t present to the student. SGFS also states, “Suicide attempts are successful more than 90 percent of the time when a firearm is used” (641). As SGFS states the percentage of suicides in college could more likely happen and make suicide attempts more successful if the gun was presented to a student. The suicide rates are already high and adding guns to college campuses would just increase the chances even higher. If guns were legalized these suicide attempts could lead to actual suicides and therefore increase the probability of suicides.

On the other hand, the opposition argues that concealed carry on college campuses could deter mass shooting sprees. They argue that having guns on campus could deter students and teachers from going out on massive shootings on college campus. According to Students for Concealed Carry (SCC) they state, “Campus shooters go on armed rampages because they misguidedly seek to make a point or attain infamy.” (652). They further point out that having other concealed carry holders might deter a few campus shooters and it could potentially prevent them from going on massive shootings. Bringing concealed carry on college campus could deter shooters, but it could also put the lives of students and staff at risk as well. SGFS points out two shootings that have had armed police officer and still went on shootings even if the police officers were present (642). SCC explains that even if there were armed police officers present and still did not deter the shooters it still led to fewer deaths. This might be true however if concealed carry was allowed it would still not deter other shooters from going on massive shootings even if other licensed concealed carry holders were present. The SCC also states, “The question of whether or not concealed carry would deter would-be-mass-shooters should not be the determining factor in whether or not it is allowed on college campus.” (653). This means that the SCC thinks that they should not just focus on the fact it could potential create mass shooters but to look at it as it could reduce the number of massive shootings. SCC goes on and explains, that if a person was allowed the same right to defend himself outside of the campus then why is a person allowed the same right while he is at campus (653). This shows that people inside of school should be offered the same amount of protection that they are getting while being on college campus. Although this makes a fair point guns being present on college campus would still not deter students and staff. The possibility of gun shootings would decrease if guns were not allowed on campus so why should we take the risk of allowing guns. Concealed carry on college campus would not deter students and staff instead it makes the chances of college shootings more likely if guns were in the presence of them.

Why Our Campuses Are Safer Without Concealed Handguns?. (2020, Nov 18). Retrieved from https://studymoose.com/why-our-campuses-are-safer-without-concealed-handguns-essay 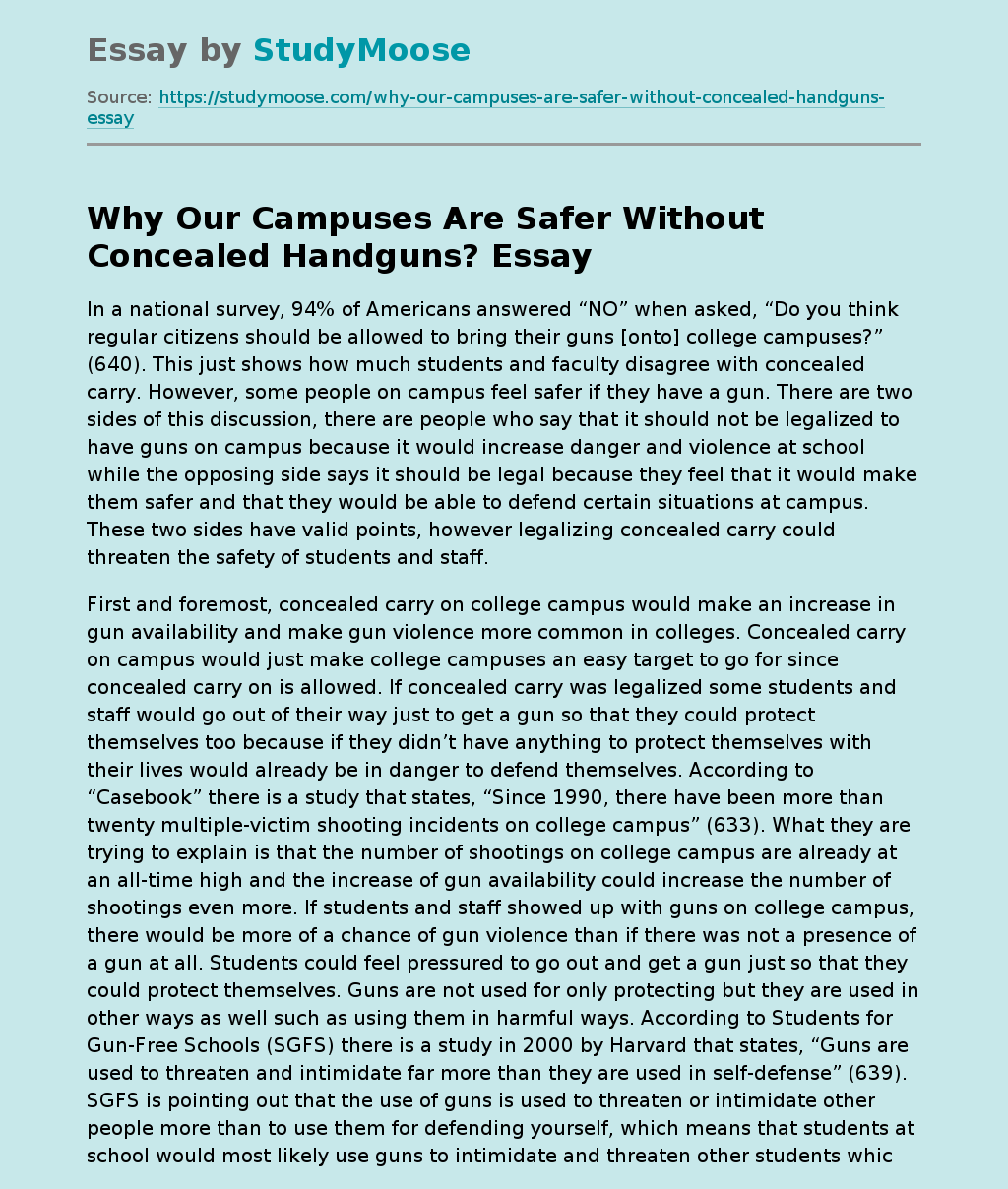