Why Legalizing Marijuana Be Good For the Economy?

Abstract
This report will investigate whether legalizing marijuana would be good for our current economy. In this paper you will read varying opinions from five different sources on why this change would benefit the economy. Harry Bradford of the Huffington Post (11/07/2012) discusses the topic of Washington and Colorado as the first two states to legalize marijuana, and its potential effect on their economy. Also included a “question and answer” article from investigative journalist Douglas Fine (the author of Too High to Fail: Cannabis and the New Green Economic Revolution (Gotham)), who has created a book on his own experience investigating why legalization would boost the economy.

Don't use plagiarized sources. Get your custom essay on
“ Why Legalizing Marijuana Be Good For the Economy? ”
Get custom paper
NEW! smart matching with writer

Another source will be Tracy Oppenheimer (Pot Economics, December 2012) who sat down with Douglas Fine to talk to him about his experience. The three articles will vary, yet they will all come to the same conclusion. I will examine and summarize each article so you are able to better understand the potential our economy can gain from legalizing marijuana.

Would Legalizing Marijuana Be Good For The Economy
There has been plenty of talk recently on various ways of boosting our economy. A lot of people have indicated that legalizing marijuana would be our best option. We will be able to better determine marijuana’s effect on our economy soon as two states have already legalized the commercial use of marijuana. Colorado, with the “Colorado Amendment 64 and, Washington State’s “Washington Initiative 502” have passed in November of 2012. In fact, Colorado stores are scheduled to open January 1st, 2014.

Harry Bradford of the Huffington Post (11/07/2012) tells us that “stoners” should not be the only ones celebrating. He estimates that both of these states could see a major economic boom because of the legalization.

He also estimates the two states could bring in a combined $550 million. Other leading economists estimate legalizing pot in the entire United States could bring up to 14 billion more dollars circulating in our economy. Investigative journalist Douglas Fine recently wrote a book, Too High to Fail: Cannabis and the New Green Economic Revolution (Gotham). He discussed his book and his experience in a question and answer (Q&A) with Tracy Oppenheimer (December 2012). Douglas discussed his travels to Mendocino, California and how this might translate to the rest of the country. In 2011 the federal government allowed Mendocino County to operate a program selling marijuana legally with state and federal taxes applied to each sale. The county generated $600,000 worth of revenue. Just imagine the amount of money we could save nationwide. Keywords: question and answer

Margery Eagan in a related article, Joint resolution: Taxing pot just makes cents (2009), takes a law enforcement stand point and estimates we would save billions just in enforcement and jailing costs. It is even estimated that legalizing marijuana might allow the lowering of the current gas tax and maybe even eliminate the hikes on tolls. ​On top of all this legalizing marijuana is also a job creator. New York Post writer Ccampanile in his article, NY’s Rx-pot pushers: Yes, we cannabis! (2012), says that the legalization of pot in Colorado has created 8,000 direct jobs and 12,000 indirect jobs from the 400 licensed marijuana clinics (for sales of medical marijuana). He states the pot industry in Colorado is heavily regulated and is worth around $1.5 billion. He goes on to estimate the state of New York could generate $1 billion if it followed suit.

We can get a better understanding on the impact by comparing marijuana to the U.S. beverage alcohol industry. Kelly Phillips Erb in her article, Stirring the Pot: Could Legalizing Marijuana save the Economy (2012), compares the numbers and estimates that the alcohol industry generated $91 billion in wages and only 3.9 million jobs for U.S. workers. Harry Bradford in his article 14 Ways Marijuana Legalization Could Boost The Economy (2012) gives us 14 ways we could benefit if marijuana was legal. One of the ways is the cost savings for inmate charged for marijuana-related crimes which is an astounding $1 billion annually. He is also in agreement that the marijuana industry could be a $100 billion industry.

All of these analysts feel there are a lot of hurdles to jump before something like this can become a reality. In a Q&A with Douglas Fine, Tracy Oppenheimer, Pot Economics (2012), is told that about 50-56% of Americans are on board with the legalization of marijuana, yet little to no politicians are on board. Kelly Phillips Erb in the same article mentioned before says some make the argument that marijuana is a “gateway” drug, which if legalized it would only lead to the use of stronger drugs like heroin and cocaine. “It’s time for America to legalize marijuana, tax it to death, then let struggling Joe Citizen – instead of Joe Dope Dealer – reap the profits,” Margery Eagan writes. Aside from the fears that this may lead to drug dependency, everyone is in agreement when saying that legalizing marijuana will create jobs much like the alcohol and tobacco industry has done for us in the past.

Conclusion
This paper is not intended to convince you the benefits of legalizing marijuana on a moral or ethical scale. However, we cannot ignore the possibilities it could have on our economy. Based on my research, I have determined the positives outweigh the negatives. Legalizing marijuana has the potential to give our economy a huge boost and could make America strong as ever. I challenge you to come to your own conclusion and complete some research of your own on the matter, you will be surprised by the results. More examples of argumentative essays about legalizing marijuana.

Why Legalizing Marijuana Be Good For the Economy?. (2016, Mar 22). Retrieved from https://studymoose.com/why-legalizing-marijuana-be-good-for-the-economy-essay 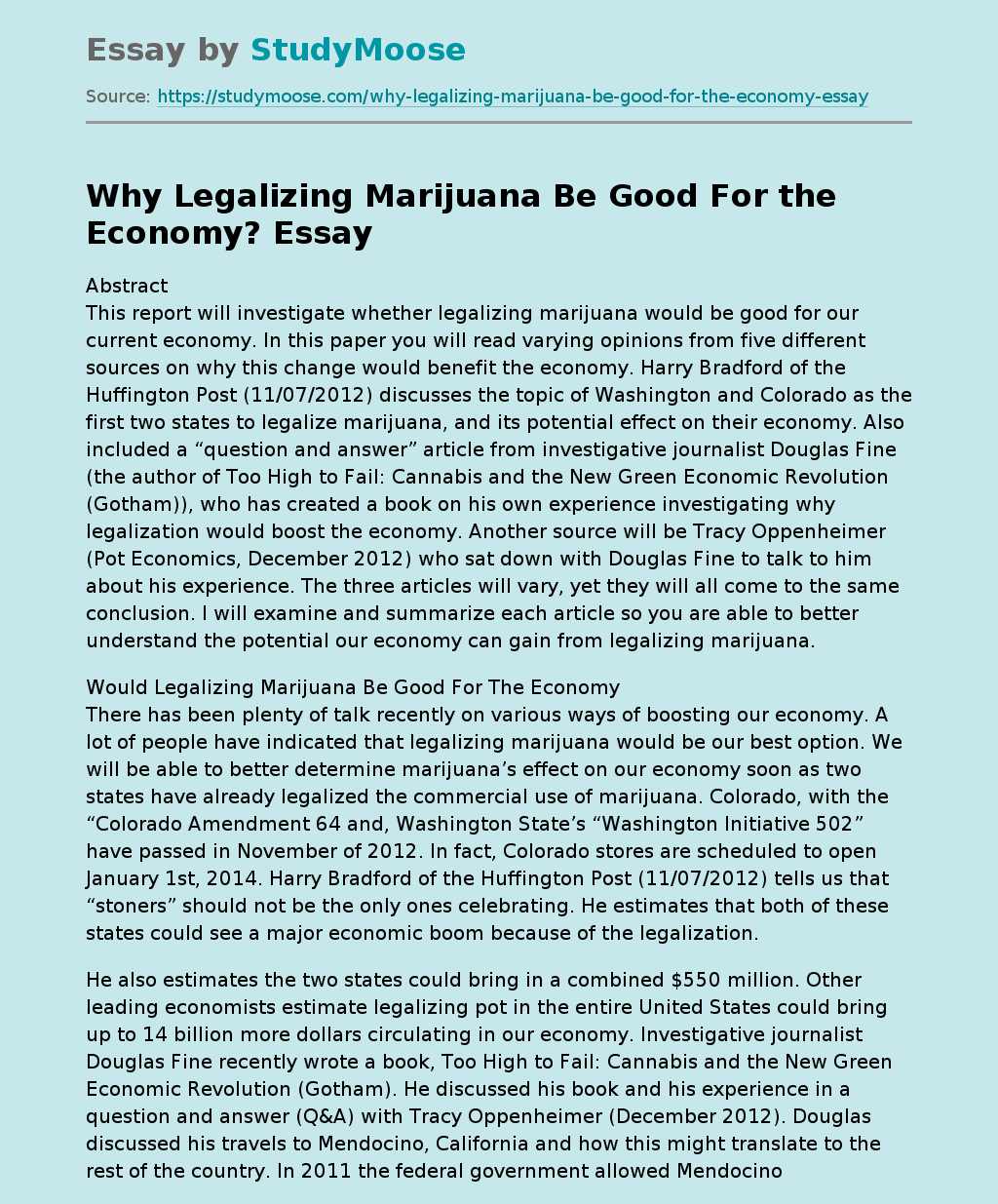