1.An undercover drug informant learned from a mutual friend that Philip Friedman “knew where to get marijuana.” The informant asked Friedman three times to get him some marijuana, and Friedman agreed after the third request. Shortly thereafter, Friedman sold the informant a small amount of the drug. The informant later offered to sell Friedman three pounds of marijuana. They negotiated the price and then made the sale. Friedman was tried for trafficking in drugs. He argued entrapment. Was Friedman entrapped? Argument for Friedman: The undercover agent had to ask three times before Friedman sold him a small amount of drugs.

Don't use plagiarized sources.
Get Your Custom Essay on Drugs Accident Just from $13,9/Page

A real drug dealer, predisposed to commit the crime, leaps at an opportunity to sell. If the government spends time and money luring innocent people into the commission of crimes, all of us are the losers. Argument for the Government: Government officials suspected Friedman of being a sophisticated drug dealer, and they were right. When he had a chance to buy three pounds, a quantity only a dealer would purchase, he not only did so, but he bargained with skill, showing a working knowledge of the business.

Friedman was not entrapped—he was caught.

I agree with Friedman not only did the informant ask for drugs, but he asked him constantly after he said no which could have easily influenced Friedman to sell the informant the drugs.

2. Conley owned video poker machines. Although they are outlawed in Pennsylvania, he placed them in bars and clubs. He used profits from the machines to buy more machines. Is he guilty of money laundering?

Yes he is guilty of money laundering because he took the proceeds of a criminal act and used the money to promote the crime of his poker machines.

3.Karin made illegal firearm purchases at a gun show. At her trial, she alleged that she had committed this crime because her boyfriend had threatened to harm her and her two daughters if she did not. Her lawyer asked the judge to instruct the jury that the prosecution had an obligation to prove beyond a reasonable doubt that Karin had acted freely. Instead, the judge told the jury that Karin had the burden of proving duress by a preponderance of the evidence. Who is correct?

The judge is correct. In this situation Karin is trying to plead not guilty because she was under duress, so she will have to have evidence to prove that she acted under duress

Yes because the informant had claimed to bought drugs from Dorian before.

5.Shawn was caught stealing letters from mailboxes. After pleading guilty, he was sentenced to two months in prison and three years supervised release. One of the supervised release conditions required him to stand outside a post office for eight hours wearing a signboard stating, “I stole mail. This is my punishment.” He appealed this requirement on the grounds that it constituted cruel and unusual punishment. Do you agree?

Yes. The punishment will be breaking the eight amendment because of standing outside a post office holding a sign stating I stole mail will not only be degrading, but also an unusual and cruel punishment.

1.At approximately 7:50 p.m, bells at the train station rang and red lights flashed, signaling an express train’s approach. David Harris walked onto the tracks, ignoring a yellow line painted on the platform instructing people to stand back. Two men shouted to Harris, warning him to get off the tracks. The train’s engineer saw him too late to stop the train, which was traveling at approximately 55 mph. The train struck and killed Harris as it passed through the station. Harris’s widow sued the railroad, arguing that the railroad’s negligence caused her husband’s death. Evaluate her argument. Harris wife really does not have an argument because the railroad did everything in their power to prevent his death. Harris will be at fault for his own death

2. Ryder leased a truck to Florida food service powers, an employee, drove it to make deliveries . He noticed that the strap used to close the rear door was frayed, and he asked Ryder to fix it. Ryder failed to do so in spite of numerous requests. The strap broke, and Powers replaced it with a nylon rope. Later, when Powers was attempting to close the rear door, the nylon rope broke and he fell, sustaining severe injuries to his neck and back. He sued Ryder. The trial court found that Power’s attachment of the replacement rope was a superseding cause, relieving Ryder of any liability, and granted summary judgment for Ryder. Powers appealed. How should the appellate court rule. The decision should be based on the state laws of contributory or comparative negligence because although Powers told Ryder to fix the rope you can make the same argument that by Powers switching ropes also help contributed to his injury.

3. A new truck, manufactured by General Motors Corp. (GMC), stalled in rush hour traffic on a busy interstate highway because of a defective alternator, which caused a complete failure of the truck’s electrical system. The driver stood nearby and waved traffic around his stalled truck. A panel truck approached the GMC truck, and immediately behind the panel truck, Davis was driving a Volkswagen fastback. Because of the panel truck, Davis was unable to see the stalled GMC truck. The panel truck swerved out of the way of the GMC truck, and Davis drove straight into it. The accident killed him. Davis’s widow sued GMC. GMC moved for summary judgment, alleging Gmc could be violators of Negligence Per Se because the brand new automobile should have nothing wrong with it that could threaten the lives of drivers automobiles should be created to protect drivers as much as possible. Gmc is responsible for factual causation and foreseeable harm. By giving the man a defective vehicle I believe any accident which happened on the road or streets can be foreseeable.

4. You be the Judge Writing Problem When Thomas and Susan Tamplin were shopping at Star Lumber with their six-year-old daughter Ann Marie, a 150-pound roll of vinyl flooring fell on the girl, seriously injuring her head and pituitary gland. Ann was clearly entitled to recover for the physical harm, such as her fractured skull. The plaintiffs also sought recovery for potential future harm. Their medical expert was prepared to testify that although Ann would probably develop normally, he could not rule out the slight possibility that her pituitary injury might prevent her from sexually maturing. Is Ann entitled to damages for future harm? Argument for Ann: This was a major trauma, and it is impossible to know the full extent of the future harm. Sexual maturation is a fundamental part of life; if there is a possibility that Ann will not develop normally, she is entitled to present her case to a jury and receive damages. Argument for Star Lumber: A plaintiff may not recover for speculative harm. The “slight possibility” that Ann could fail to develop is not enough for her to take her case to the jury. If I was the judge I would not rule out the possibility that Ann could suffer harm in the future. I would request that Ann obtain documents from doctors that will help prove that the accident that happened could cause future damages.

5. Irving was a lawyer who prepared income tax returns for Maroevich. Irving agreed to draft a will for Maroevich, leaving all of the property to Maroevich’s sister, Biakanja. When Maroevich died, the probate court refused to accept the will because Irving had failed to have the signatures properly witnessed. As a result, Biakanja inherited only one-eighth of the estate. She sued Irving, who defended by saying that he had no duty of due care to Biakanja because all his dealings were with Maroevich and none were with her. Do you agree? 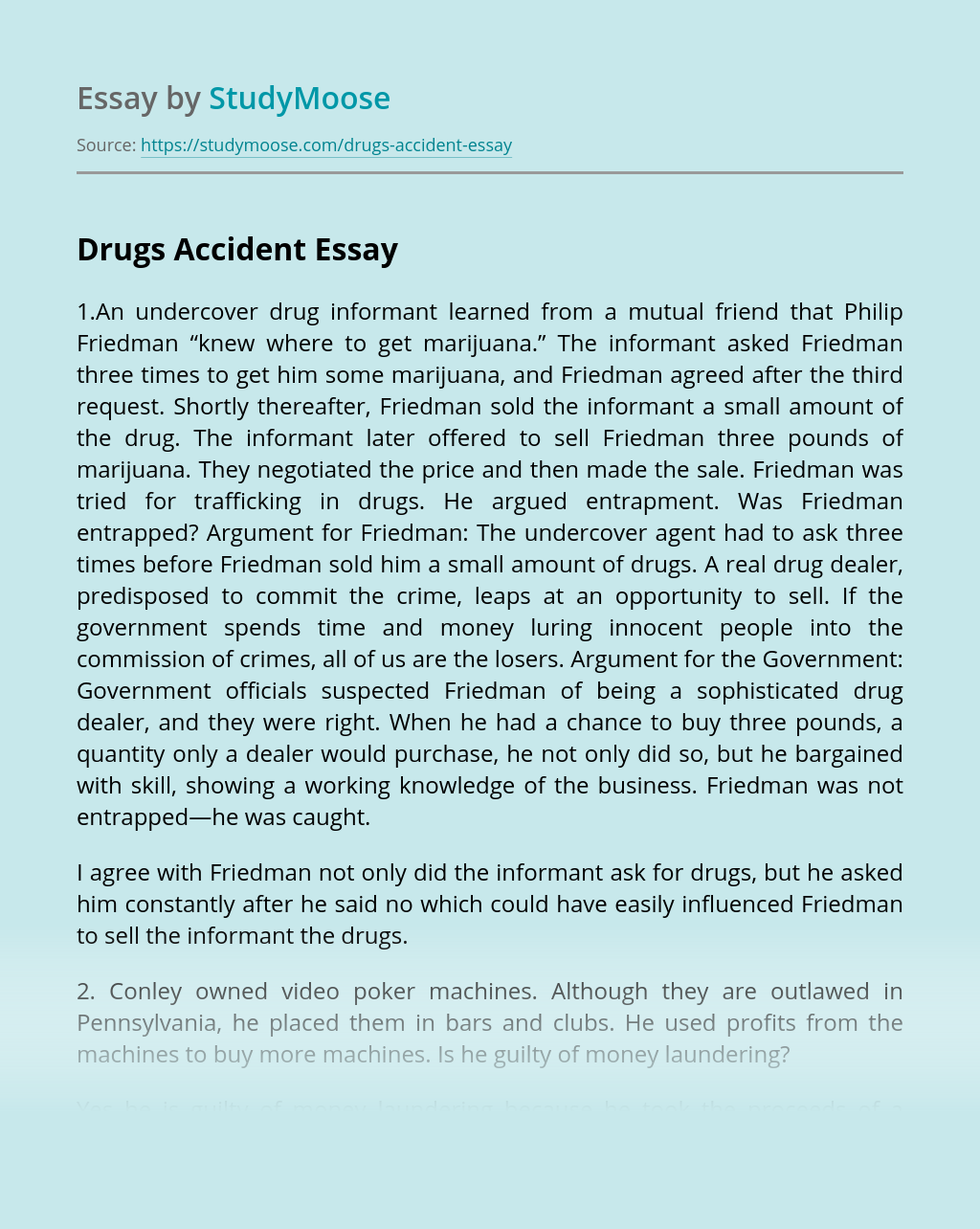 Many times within a sentencing, an offender is given a certain time to file an appeal within. If they don’t appeal a verdict or decision within 30-days for example, they must wait until the ‘next go-around’ so to speak. Many times a certain amount of time must be served before an appeal can be filed.... VIEW ESSAY

In this paper I will be evaluating past, present, and future trends pertaining to the corrections system. There are many different trends that correctional facilities have used in the past and these trends have continued on to modern day and maybe will continue on into the future. As part of my evaluation I will identify... VIEW ESSAY

View sample
Get Essay
Criminals are made or born

An understanding of criminal behaviour has been attempted by psychologists through many different theories. The three theories I will discuss are: the biological theory, the psychological theory and the social theory of crime. Each theory provides a thorough explanation of why people carry out criminal behaviour, however, which theory offers the better explanation? Are criminals... VIEW ESSAY

The criminal justice system in the United States has over time and in recent times been developed in two model systems. The crime control model and due process model. The two systems have been adopted over time to deal with the spiraling rate of crime. On the one hand conflict and crime control model which... VIEW ESSAY